This August, our company faced another grim consequence of the COVID-19 pandemic and ensuing travel restrictions: the separation of many employees from our company as we reduce our workforce due to suppressed travel demand. In this commemorative blog series, we are bidding aloha to longstanding employees and recognizing their dedication, hard work and passion, which helped mold the future of our company. Hawaiian Airlines will not be the same without them.

Sixty-two years ago, Yoshio Nitta clocked in for his first day in what was then called “the radio shop” at the former Hawaiian Airlines maintenance hangar in Honolulu. Now 92 years old and a staple mechanic in our accessories and avionics division, he will join hundreds of employees who elected to retire Oct. 1 to help offset involuntary workforce reductions caused by the COVID-19 pandemic. 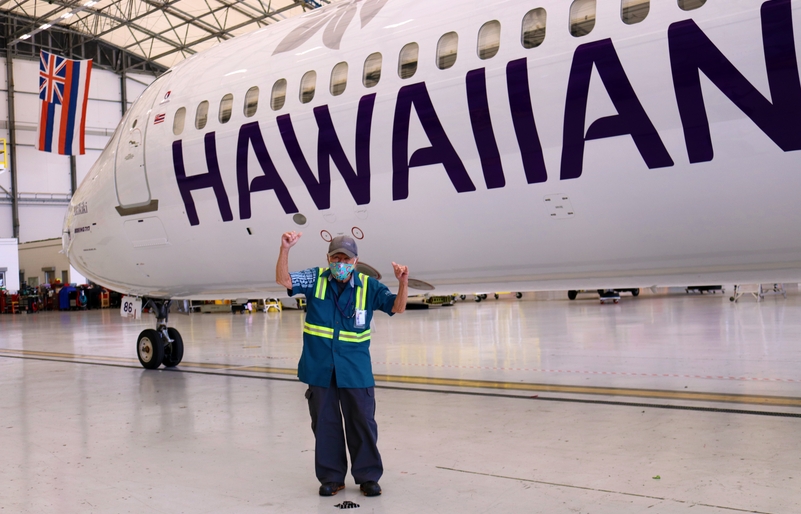 Nitta pictured in front of a Boeing 717, his favorite aircraft to work on, inside the Charles I. Elliott Maintenance and Cargo Facility.

Nitta, who originally sought to be a television repairman, got his start in aviation maintenance when he joined Hawaiian Airlines in 1958.

“When I got out of trade school, I was sent to get my FCC1 [Federal Communications Commission] license to be a television repairman. But then I had a friend working at Hawaiian who called me up and told me to come on down and interview for an opening in maintenance. So I went down, without any experience working on aircraft, and they hired me that day in their radio shop because I had my FCC license,” Nitta said during a recent interview inside our new Charles I. Elliott Maintenance and Cargo Facility in Honolulu.

For two years, Nitta maintained radio transmitters on the Douglas DC-3s and Convair CV-340 and -640s that served our network of Neighbor Island routes and local sight-seeing tours. Then, in 1960, he left the company for a change of pace, accepting a job at Qantas Airways, where he worked on line maintenance2 operations at Honolulu Airport. 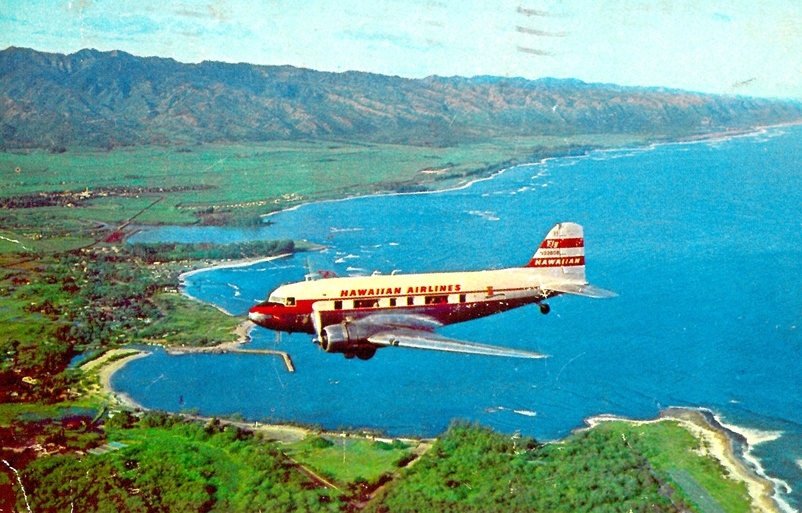 “Around 1980, Qantas decided to get rid of airplane servicing in Honolulu. There were 10 of us that were laid off and so we decided to start our own [aviation maintenance] company. It didn’t work out too well because at the time, airlines were deregulated and a lot of the carriers that came in were selling cheap tickets specials and then using that money to build their company. But the companies weren’t making any money with cheap flights and those that contracted us often didn’t have money left to pay us,” Nitta recalled. “It was hard to get paid those days, but we survived for a while.”

After struggling with his business for years, Nitta received a call from Hawaiian Airlines. “I was offered a job at the accessory3 shop. Then there was an opening in avionics, and so I went into avionics,” he said.

Nitta experienced the transformation of our fleet hands-on, from the onboarding of our first long-range aircraft, the Douglas DC-6, in 1958, to the evolution of our Neighbor Island fleet. His favorite milestone in our maintenance history came in 2001 when we transitioned to more modern, computerized systems. 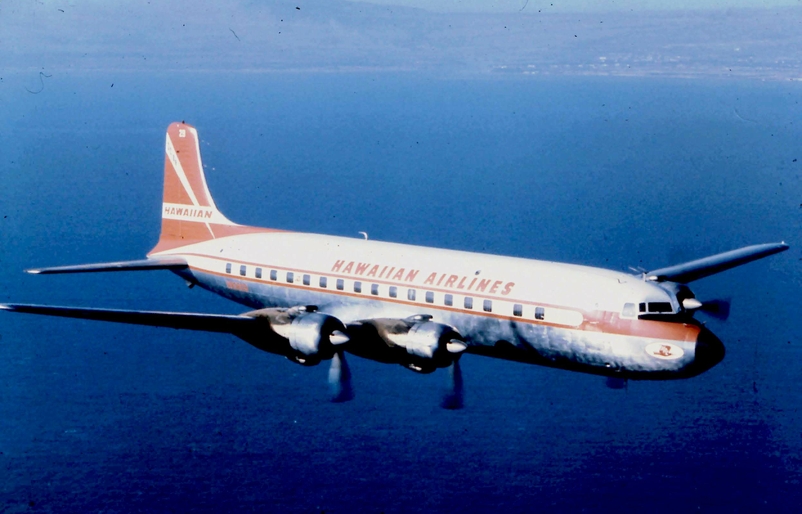 The four-engine Douglas DC-6, our first long-range aircraft, was added to our fleet during the first years of Nitta's career at Hawaiian Airlines.

“Everything became electronic with the Boeing 717 [our current Neighbor Island aircraft] – it was a completely different type of maintenance. On the DC-9s, if you changed one thing, you’d need to complete a full maintenance check. It took a lot of time, and with airlines, timing is the most important thing,” Nitta said. “But once we got the Boeing 717, we could go into the multi-function control display unit, which is a mini-computer where you could access all of the systems, and assess an issue quickly.”

Today, Nitta handles light repairs to the Boeing 717, one of his favorite aircraft (alongside the Airbus A330) to work on for its user-friendly computer systems. Known as “Yosh,” he is praised for his incessant attention to detail, sharp mind and wealth of knowledge. 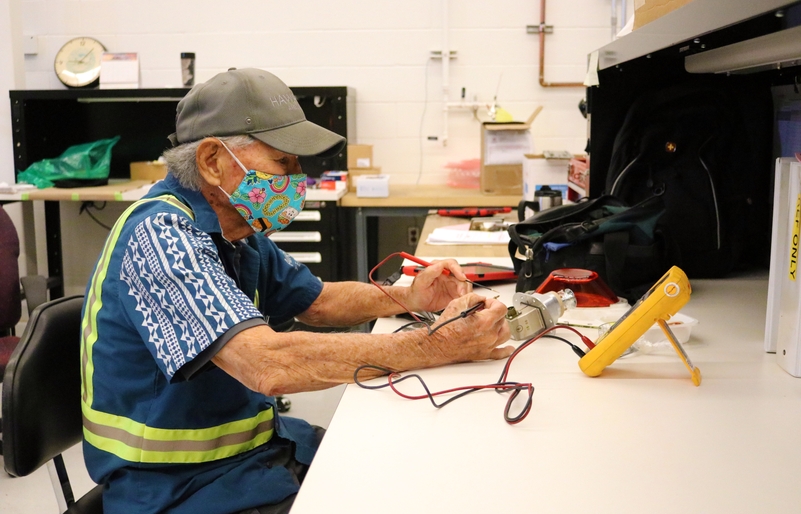 Nitta working on a light repair at his desk inside our accessories and avionics shop.

“He keeps everyone in line,” said Barry Uchima, a lead avionics mechanic who has worked alongside Nitta for 35 years. “A couple of weeks ago, a shop mechanic was working on a light assembly and Yosh had to correct him because he wasn’t doing it right…so he keeps everyone on their toes. He goes and finds things to do and doesn’t need assignments. He’s picked up all of this new technology well and has always maintained all of the required and extra training qualifications. Every day, he shows us that you’re never too old to learn.”

With his upcoming retirement, his colleagues believe they are losing a critical piece of their team.

“Yosh restarted at Hawaiian at around 57 years of age, and we started in the same year,” said Uchima, who joined Hawaiian in 1985 at 23 years of age. “I’m 58 right now, and so I can’t imagine starting a new career at this point in my life! It won’t be the same without him.” 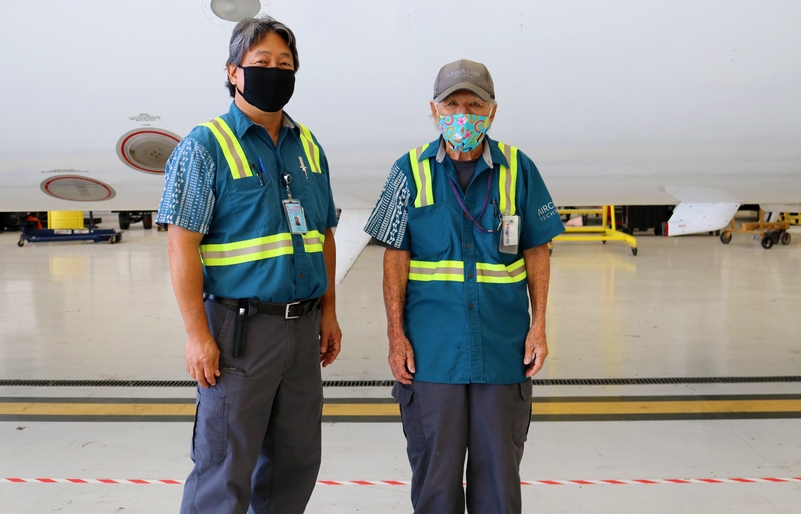 Uchima and Nitta at the Charles I. Elliott Maintenance and Cargo Facility in Honolulu.

Fellow avionics mechanic Jaimee Thomson has looked up to Nitta and admires his drive to always become a better mechanic.

“I started working with Yosh in Avionics in early 2016. I remember when I found out his age at that time, I was shocked! You rarely hear of someone in their late 80s having a 40-hour workweek. Over the last four years, I discovered that his youthful secret…was quite simple: be curious, engage in activities that keep your mind sharp, stand your ground and have a good sense of humor,” she said. “Yosh is living proof that your working life doesn’t have to end in your 60s, and I will miss watching him and the guys tease each other daily.” 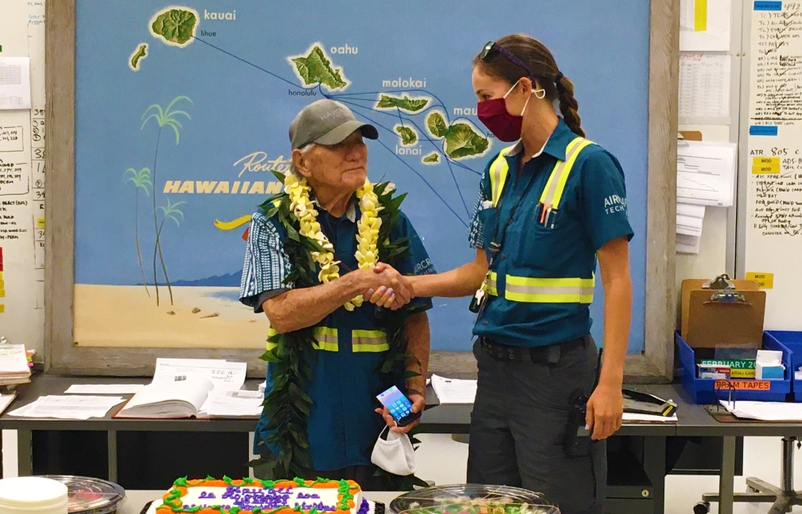 Thomson shakes Nitta's hand during his farewell party last week in the accessories and avionics shop.

When asked about his feelings on leaving the hangar for the last time, Nitta held a strong face. “I’m not ready to retire…but I was planning to retire soon anyway. I’m 92 years old; nobody works at 92 years old!” he laughed.

In his retirement, Nitta will focus on staying healthy during the pandemic and volunteer in the community when it’s safe for him to do so.

On behalf of our entire Hawaiian Airlines ‘ohana, we thank you, Yoshio Nitta, for your dedication to keeping our aircraft flying and guests safe.

1. A specific FCC license is required to work on radio and transmitters and is considered a valuable extra qualification in the aviation industry.

2. Line maintenance work often happens outside of a hangar and include scheduled maintenance, such as daily checks, and unplanned tasks, such as troubleshooting and minor repairs.

3. Avionics work includes repairs to communications, navigations, and auto-flight systems and instrumentation. Accessories work involves taking care of any electrical faults and troubleshooting that line maintenance would need help with, including wiring throughout the aircraft.