On a brisk New England morning, Hawaiian Airlines made history as the first carrier to offer non-stop service between Boston (BOS) and Honolulu (HNL). Today, the route holds the title as the longest interstate flight in U.S. history.

Our Hawaiian Airlines ‘ohana kicked off the inaugural HA89 (BOS-HNL) flight in true island style, welcoming our guests in the same hospitable way we would welcome them into our home. We indulged guests arriving at our gate with complimentary food and drinks, music and hula, and a few words from Hawaiian Airlines President and CEO Peter Ingram. Then, as guests boarded the aircraft, each received a fresh orchid lei – a special memento that embodies the aloha spirit of Hawaiian culture. 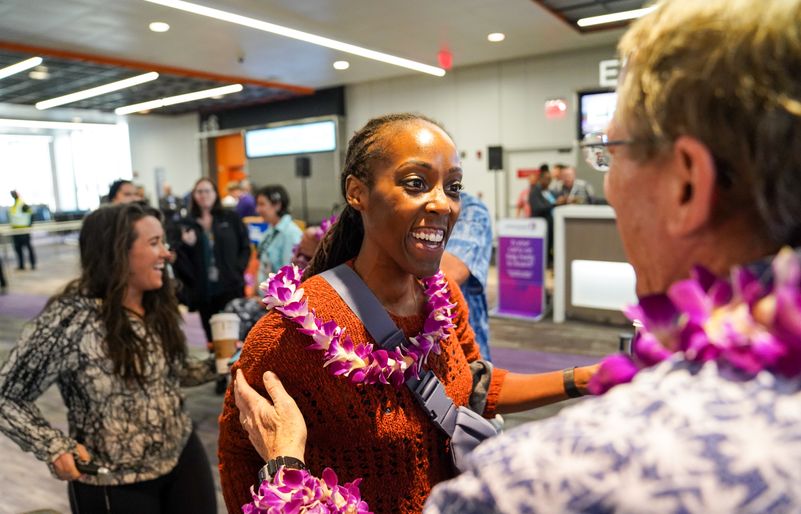 Amid the celebrations, I grabbed my camera and made a run for the top floor of the airport’s Central Parking Garage. This, I learned via coconut wireless (word-of-mouth), was a popular watering hole for the Boston Plane Spotters, a group of aviation enthusiasts who live for photographing airplanes.

Sure enough, I found the group angling their lenses at Runway 33L outside of Terminal E, with East Boston across the harbor as their backdrop. We welcomed each other and talked story (had a conversation) to pass time until our Hawaiian Airlines Airbus A330 would be positioned for take-off. 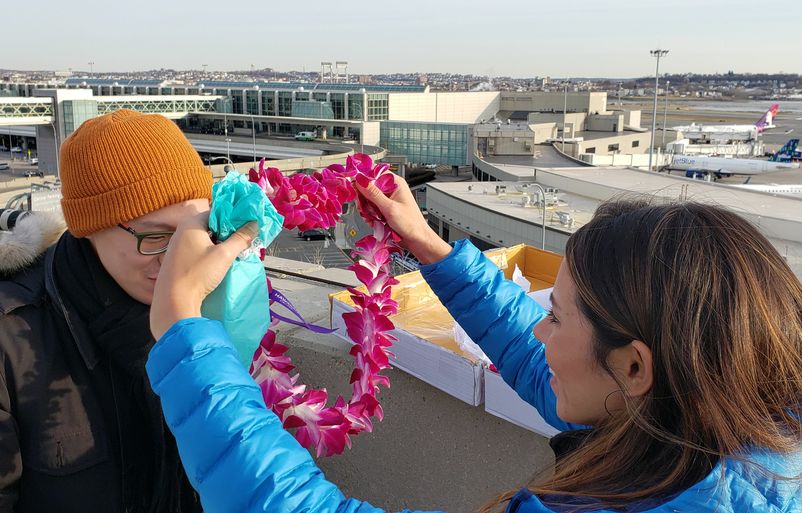 The author offering a welcoming lei to a BOS plane spotter. Photo courtesy of Thornton Shepherd

“We always love to celebrate these things, but when an airline includes us in their special day, it’s fantastic,” said Thornton Shepherd, founder of the Boston Plane Spotters.

This gathering was unlike any other for the group. For many, it was the first time they met Pualani – the unmistakable Flower of the Sky icon adorning the tails of our fleet -- and saw her proud gaze in the Massachusetts skies. 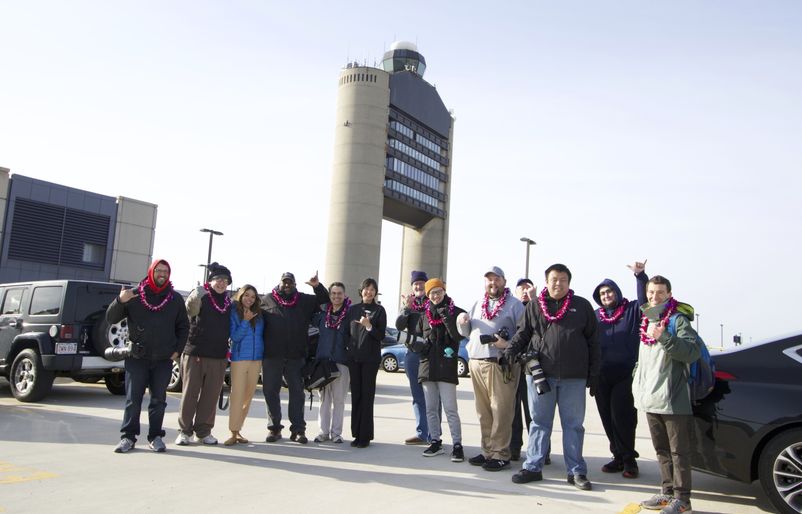 “We are so happy to have a new airline coming into Boston, particularly one with Pualani on the vertical stabilizer,” said Jeffery Magnet, a longtime BOS plane spotter.

I learned plane spotting happens daily at BOS. The group was created by a collective of aviation lovers who organize gatherings around all things aviation. Their ears perk to news of inaugurals, interesting liveries, notable air turn-backs, and more.

“Spotters are out every day, especially for these events,” said Thornton. “We had an inaugural from another flight last week and some of us actually flew on the plane to take pictures from the inside while others took pictures from the ground.” 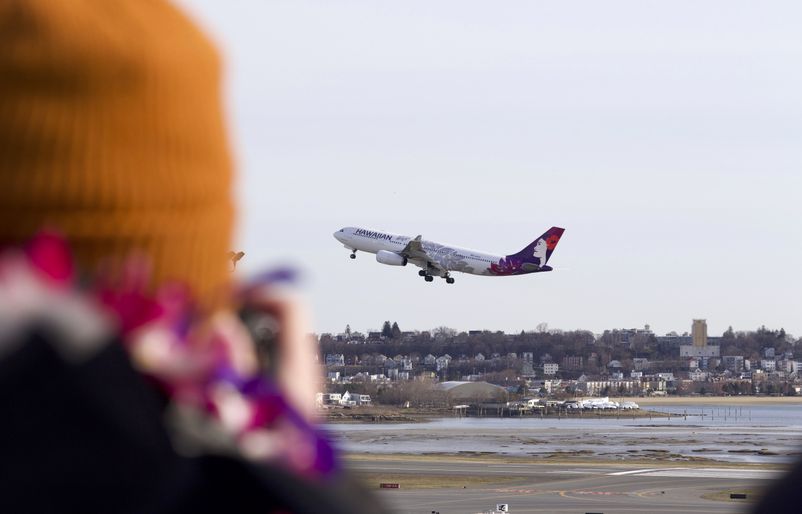 The group includes a mix of personalities, including pilots, aviation bloggers and just your “average Joe” mesmerized by airplanes since childhood. During a conversation, Magnet reminisced on when he and his father would go to the airport, walk on the tarmac and place his hands on a new Trans World Airlines aircraft. Nowadays, he shared, he prefers to take photos from a helicopter.

Plane spotters rely heavily on applications like live Air Traffic Control, Flightradar24, FlightAware, and other trackers to map an aircraft’s exact location and know when and where they need to set up with their camera gear.

In the case of HA90 (our first flight to Boston from Honolulu), the group followed the aircraft’s path the night prior, set their alarms, and woke up before sunrise to document the plane’s wheels touch the runway.

“I woke up this morning and the first thing I did was look at Flightradar24 to see where it was, and it was over Detroit, so I knew I had time to get over here,” Thornton said. 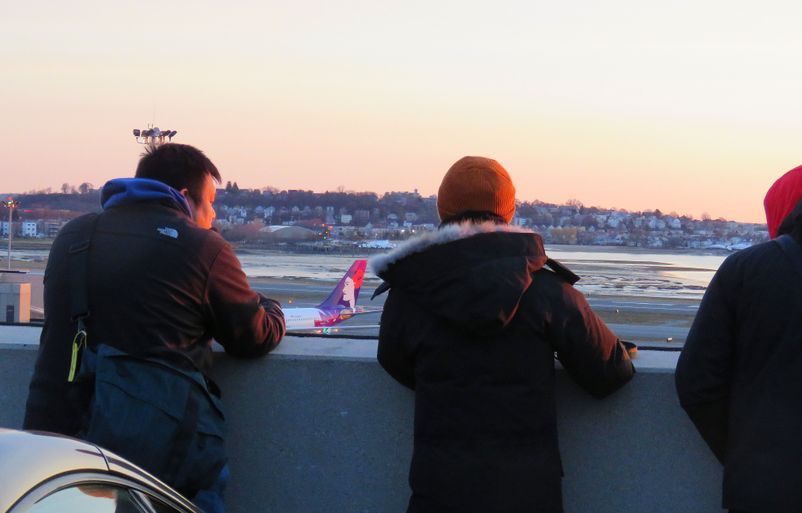 Plane spotters on top of the Central Parking Garage at BOS after the arrival of Hawaiian's inaugural flight from Honolulu. Photo courtesy of Thornton Shepherd.

Most of the first group returned to the warmth of their homes to prepare for the day ahead, while others like Thornton braced the bitter cold for the departure of HA89. When the time came for our Airbus A330 to spread its wings, the spotters took their positions to capture the perfect shot.

Pualani left our sight, bound for warmer shores, and I thanked them for allowing me to be a spotter for a morning. As I said my goodbyes, Thornton admitted to me that, just as the plane took off, his camera battery died due to the cold air.

“I wasn’t expecting that to happen, and it was one of the first times I’ve watched through my own eyes and not the lens of a camera,” he said. “It was actually a truly beautiful moment.” 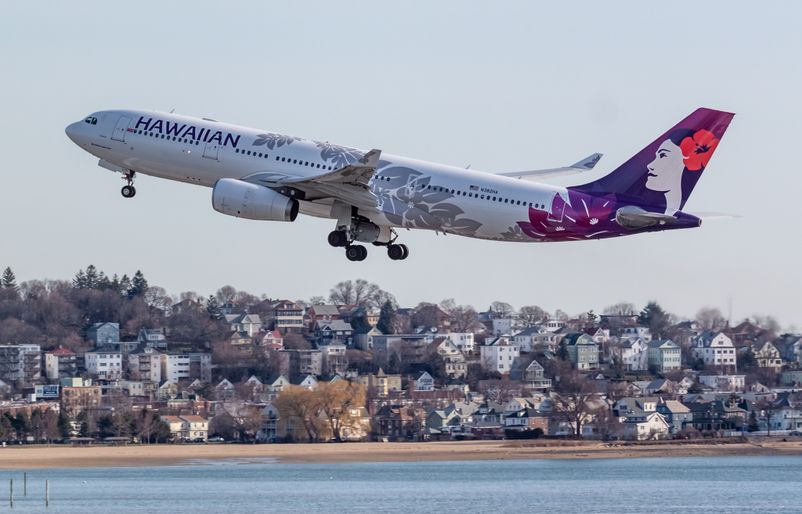 Click here to learn more about why we chose Boston as our newest route, or here to experience our flight.

SLIDESHOW: Check out some of my favorite shots from our inaugural flight and morning with the Boston Plane Spotters. Click the arrows or photos to view more. Image credits can be found in the file name when you right click + save image as. 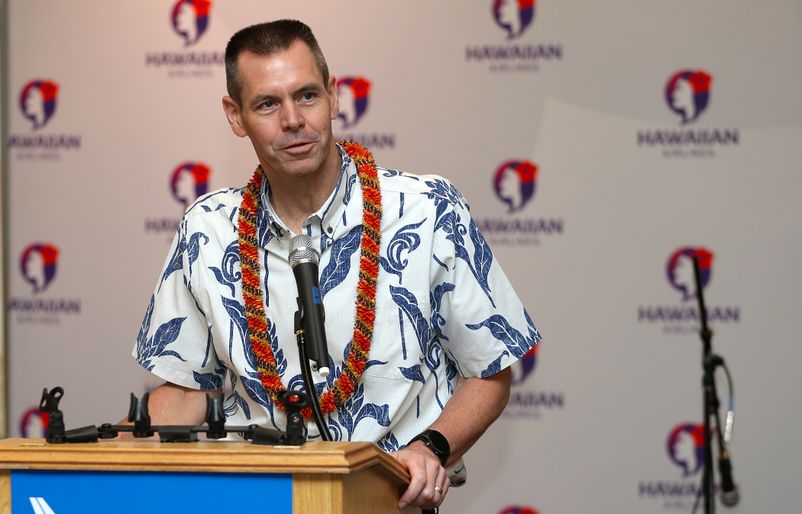 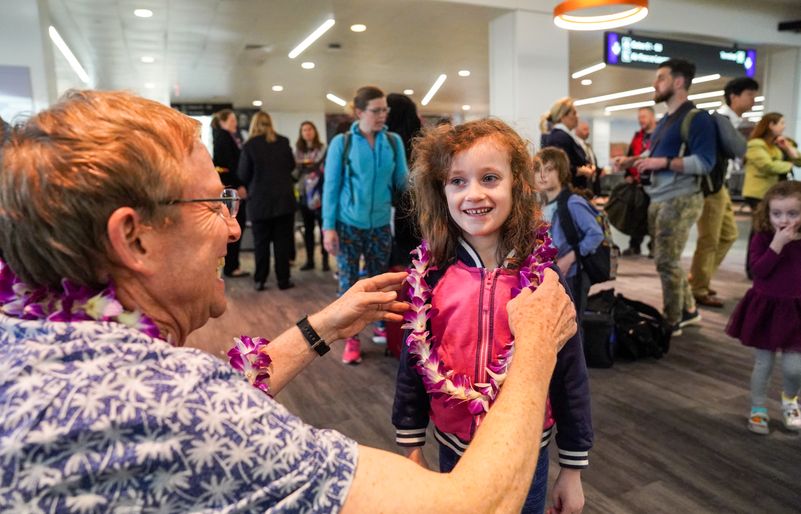 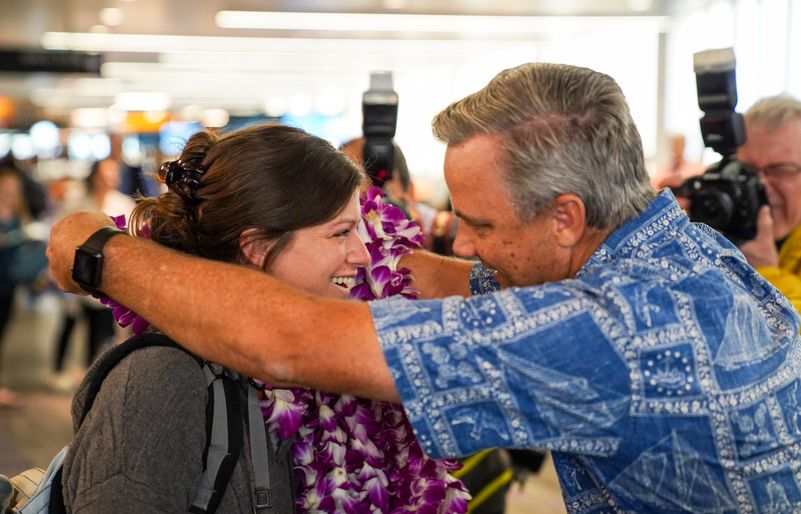 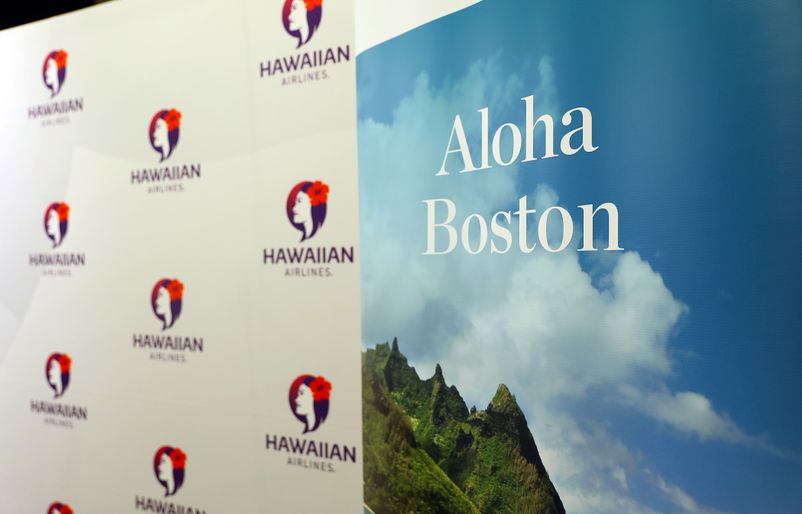 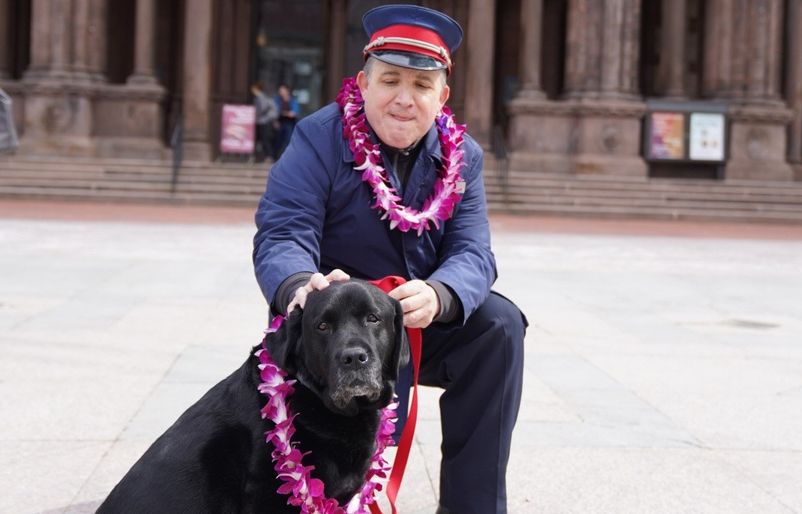 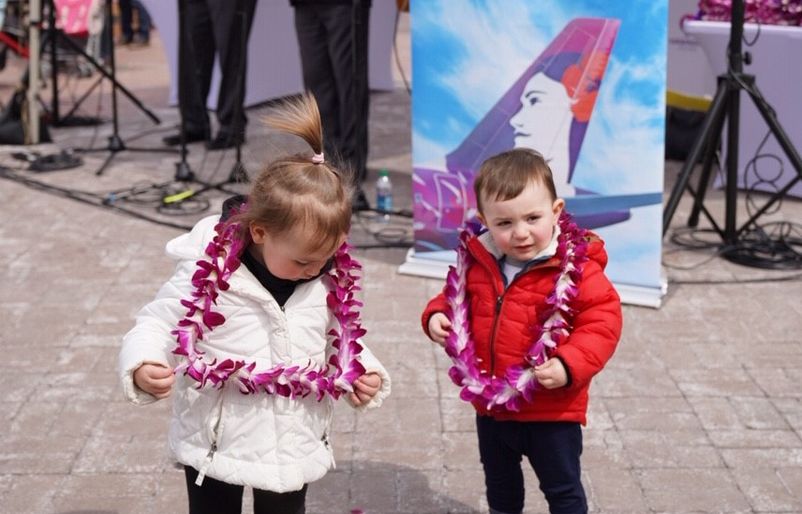 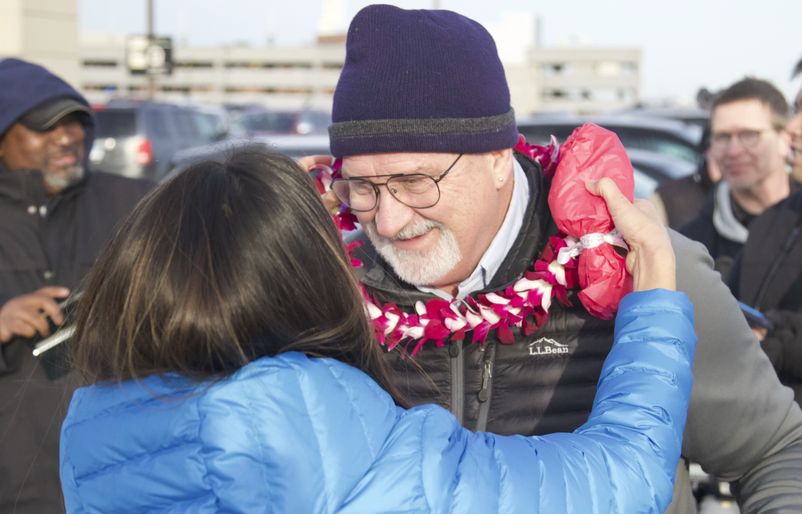 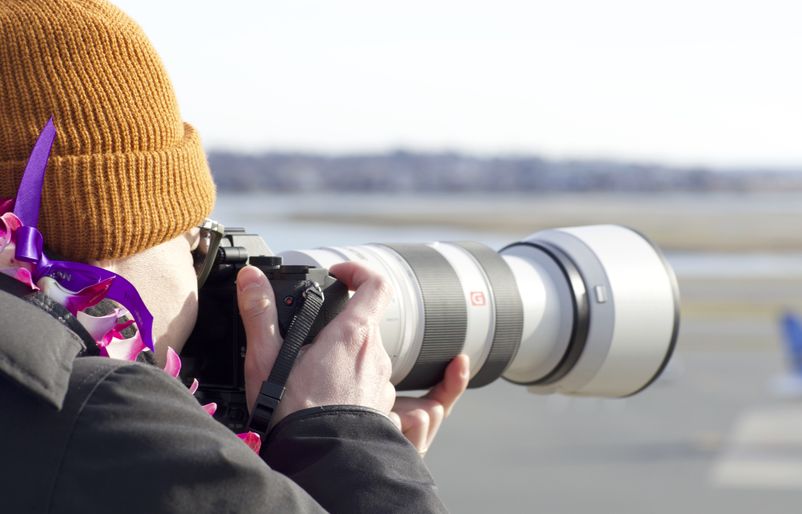 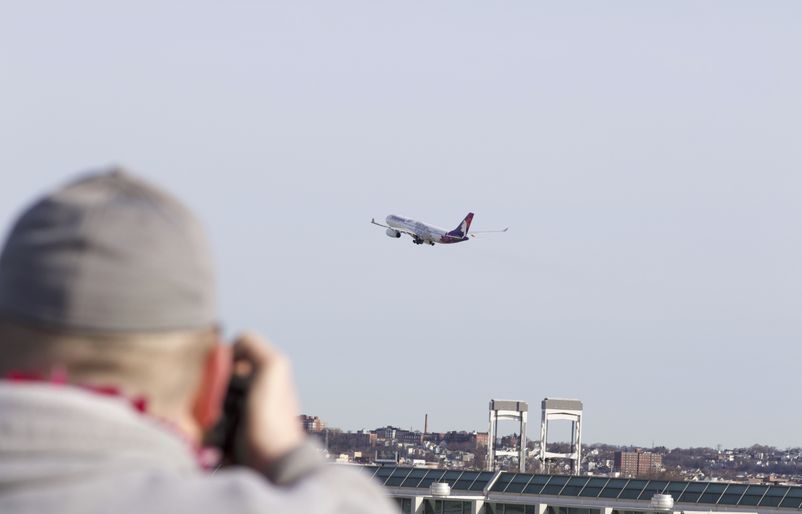 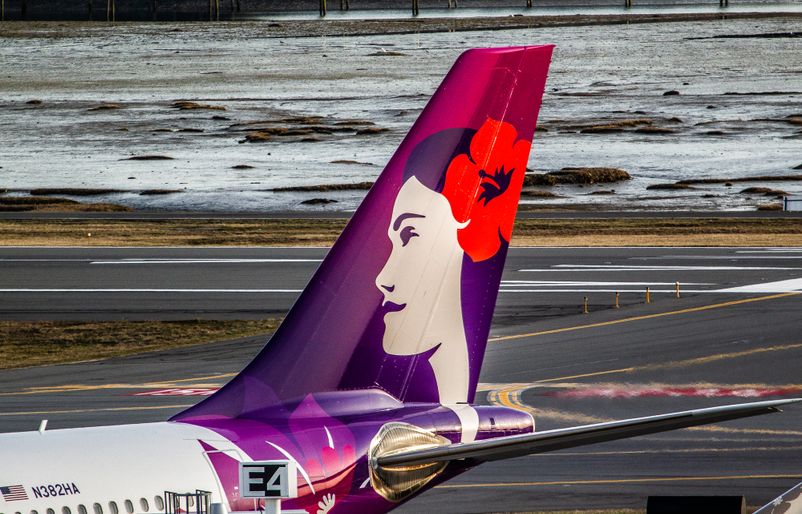 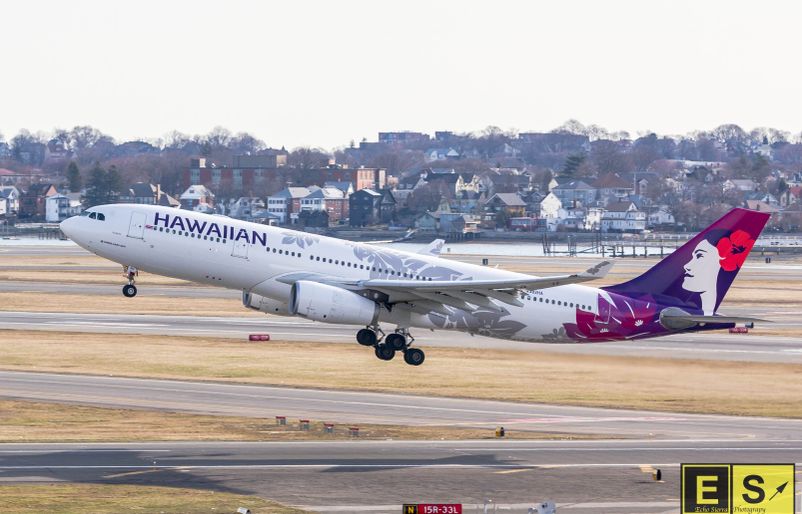 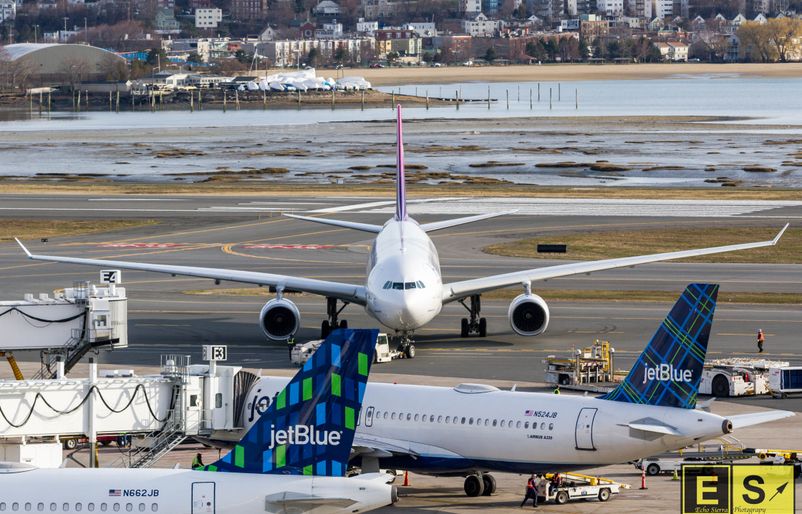