It’s no secret that one of the best perks of working for an airline are the flight benefits. Flying standby becomes a way of life and you quickly learn the tricks of the trade, including knowing the odds of scoring a seat and having a series of back-up flights if you don’t.

This past summer, Alex Bachwich, our manager of future schedules, put his pass-traveling expertise to the ultimate test after being challenged by a colleague to visit every Neighbor Island station served by Hawaiian Airlines in one day. 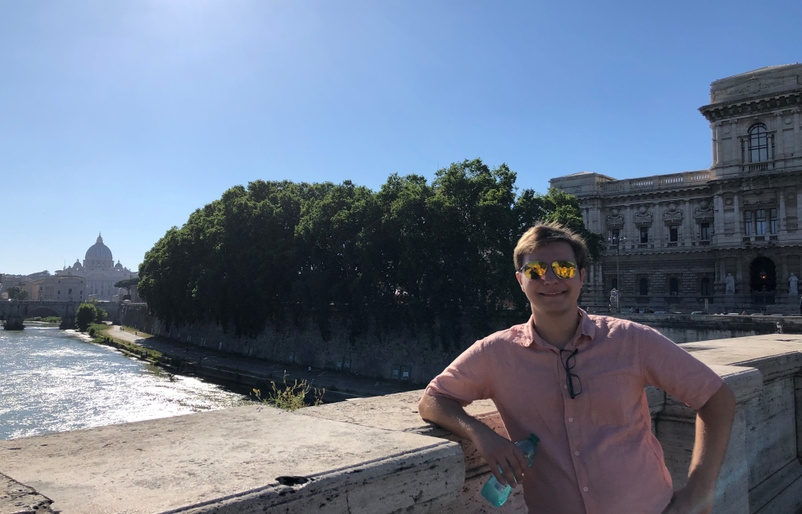 Bachwich, pictured above on a pass travel trip in Rome, has worked for Hawaiian Airlines since August 2017.

To succeed, Bachwich would need to travel on 13 flights to all eight airports we serve in the islands; these flights touch all four major islands (O‘ahu, Island of Hawai‘i, Maui, and Kaua‘i) and the smaller island communities of Lāna‘i and Moloka‘i. He’d be required to fly standby during the peak summer travel season for every leg of his journey, armed with meticulous back-up plans in case he missed any of his flights.

To help paint a picture of just how extensive his trip planning was, check out his final itinerary: 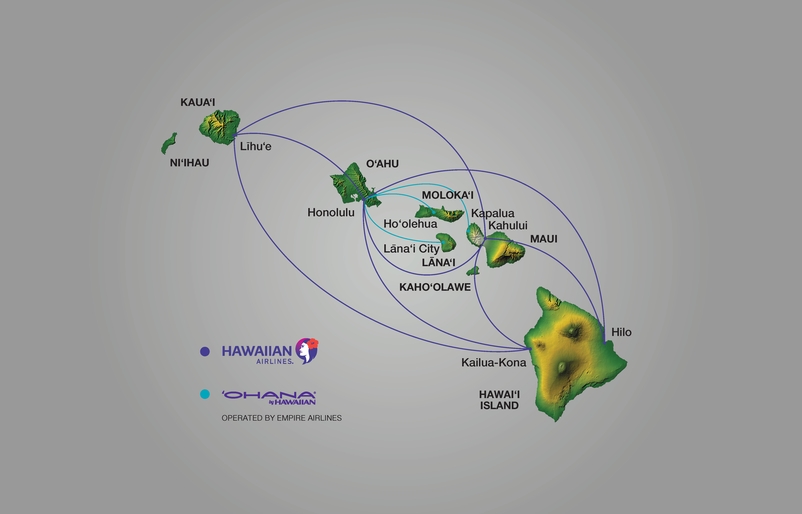 A route map of our Neighbor Island network for reference.

We sat down with Bachwich to learn more about how he pulled off his island-hopping standby adventure:

What inspired you to fly every Hawaiian Airlines Neighbor Island airport in one day…and on standby?

I always see a lot of our colleagues taking advantage of our Neighbor Island network, which touches every major island–except Ni‘ihau, which is privately owned—in the archipelago. My coworker and I were talking about Neighbor Island travel in a conversation one day when someone challenged us to go one step further and fly to all Hawaiian Airlines (and ‘Ohana by Hawaiian) stations in Hawai‘i in one day. To me, it seemed like a test of stamina and scheduling, but it certainly helped that we were both aviation geeks (of varying degrees)! 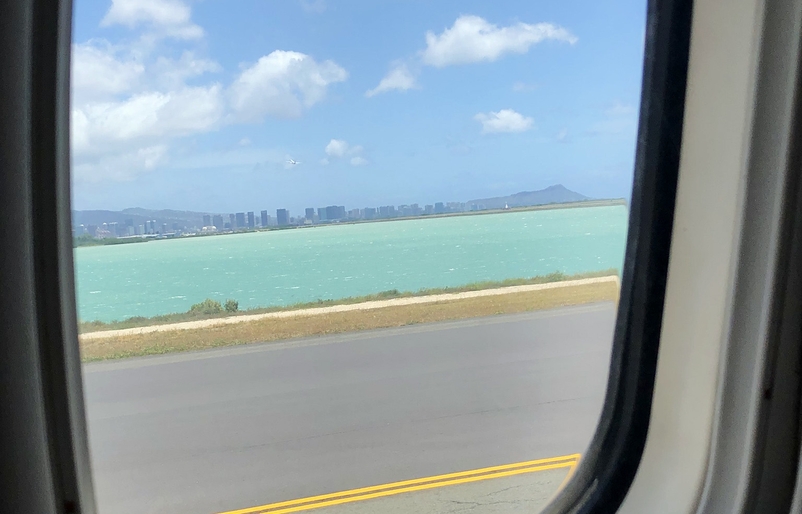 A view of Diamond Head and urban Honolulu from the window of Bachwich's HNL to JHM ‘Ohana by Hawaiian flight.

Your friend and former colleague, Brett Snyder of Cranky Flier, recently completed a similar endeavor with the help of our team members. However, Brett’s benefit was he was a confirmed passenger (did not fly based on space availability like you), and he stuck to the Boeing 717 routes. Did his trip have anything to do with you getting your plan up and going again?

We had been planning this since April and our goal was always to touch all of our Hawai‘i stations. Our task was slightly more daunting since we flew standby the whole way. I did follow Brett’s journey on the Boeing 717, our Neighbor Island jet aircraft, and it served to further motivate me to complete the entire challenge (but with both ATR-42s and Boeing 717s).

For those unfamiliar with the size of our Neighbor Island network, can you share just how many flights you took? From start to finish, how long did it take you to complete?

We took a total of 13 flights to cover eight stations in just under 17 hours. We started with the first departure of the morning on HA108, HNL to KOA, which pushed back at 4:52 a.m. We finished with LIH to HNL on HA554 which arrived at 9:29 p.m. The total elapsed time ended up being 16 hours and 36 minutes.

Since Hawaiian Airlines has such a comprehensive Neighbor Island network of an average of 198 daily flights (including ‘Ohana by Hawaiian flights), we didn’t need to do stopovers at HNL every time. (Although, we did end up having to return to HNL often due to standby loads and flight availability). 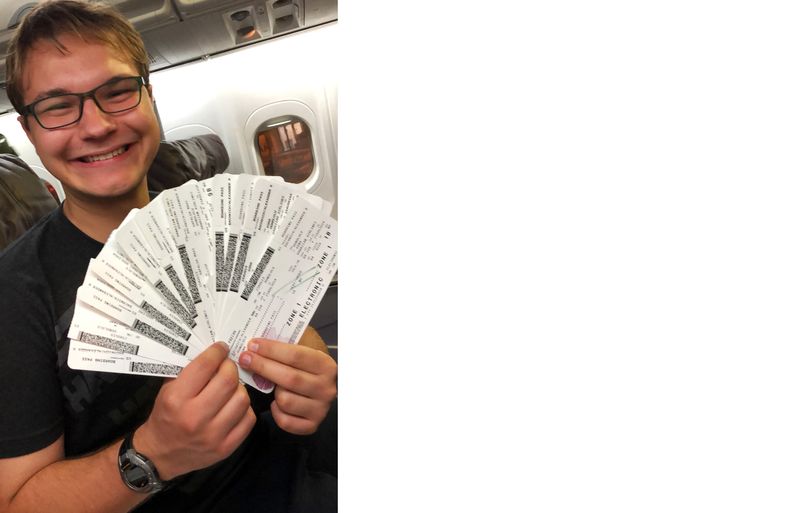 Bachwich with his completed fan of boarding passes on his last flight of the day from LIH to HNL.

What were the steps you took in planning this trip? Did you have to adjust your plans along the way?

Our initial plan that we made in April 2019 was set up in a way that allowed us to minimize the number of required flights. We didn’t end up flying until August because, well, life happens, and we also had to completely overhaul our plan to make it more flexible. Here’s why: 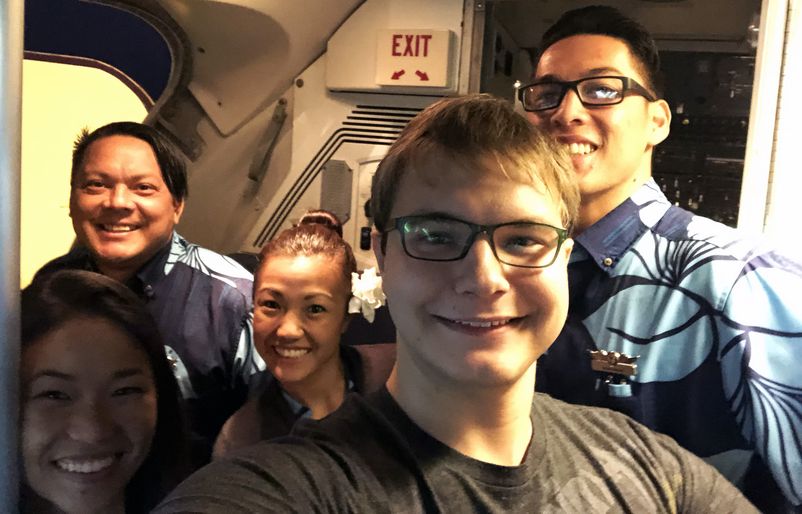 Bachwich and his flight partner often relied on the assistance and hospitality of our in-flight crew members to successfully complete their journey. Here, Bachwich is pictured with the crew that operated his HNL to KOA flight.

[EDITOR’S NOTE: Since our JHM-HNL flight is operated by ‘Ohana by Hawaiian’s ATR-42 turbo-props, there are specific baggage weight restrictions that require our guests to see an agent before boarding. More information on our ‘Ohana by Hawaiian policies can be found here.]

What was packed in your bag? Did you have time to enjoy any of the destinations?

We each packed a jacket, reusable water bottles, and snacks like trail mix. We knew we wouldn’t have time to leave the airports, so having enough snacks and water was key to keeping our energy up throughout the long day.

I also had access to the Plumeria Lounge with my Priority Pass™, so that’s where we had brief breaks for lunch and dinner. We relied mostly on the Lotus Biscoff cookies Hawaiian offers in First Class (we scored upgrades on our first three flights) and beverages for sustenance; you get tired of trail mix quickly. I also had some reading materials to keep myself entertained, and my partner slept on probably 80 percent of our flights from not sleeping much the night before.

What are the most critical elements to make this type of trip a success – especially since you were not a confirmed passenger on any of these flights? (I.e. I know you mentioned that collaborating with ground crew and monitoring flight loads in real-time was key.)

Besides what I mentioned above, it was essential that we didn’t have any checked bags. By staying in secured areas most of the time, we were able to minimize the risk of any TSA-related delays. We also owe most of our success to the ground crew in JHM, who helped us make that tight turn! Everyone went above and beyond to help us achieve our goal. 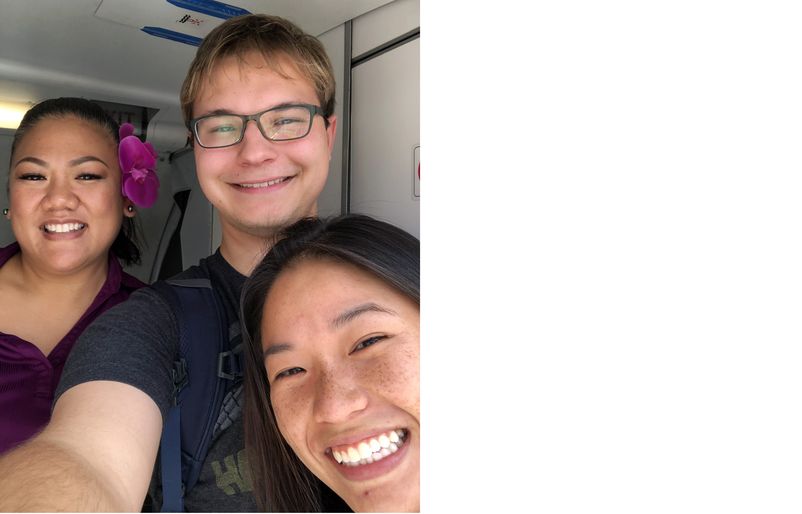 Bachwich (pictured center and right) taking a selfie with an ‘Ohana by Hawaiian flight attendant after their HNL to JHM flight.

You’re probably one of the first employees at Hawaiian Airlines to complete this type of trip successfully. Do you have any other similar adventures coming up?

We grew increasingly exhausted as we progressed through the day. But by our last flight, we were proud of our accomplishment—even though we were running on fumes at that point. My next goal is to fly to all points on Hawaiian’s network (I haven’t been to Pago Pago, Papeete, or Sacramento yet), or do the Chile-Easter Island-Tahiti-Hawai‘i circle trip.

How much POG (Passion-Orange-Guava juice) do you think you drank along the way?

Shockingly maybe only four cups!  We both stuck to coffee on the first few flights, then alternated between water and POG in the afternoon. We were lucky enough to be upgraded to First Class on the last leg of the evening (LIH to HNL) so we toasted our achievement with an in-flight beer. 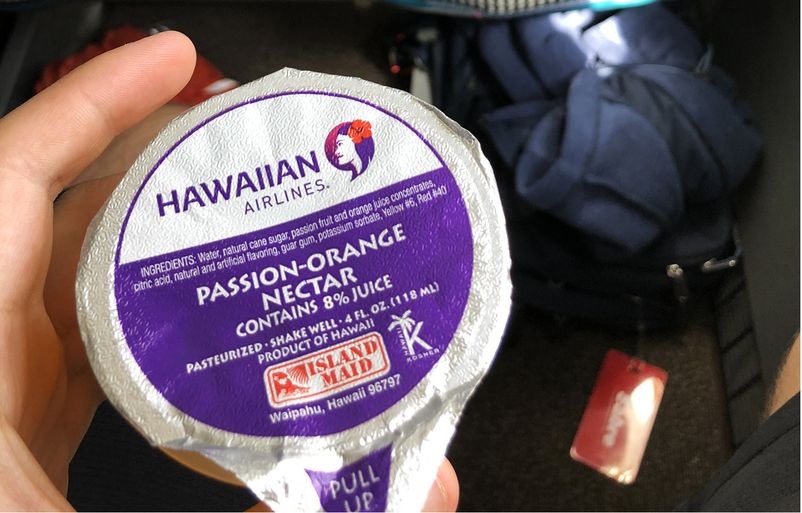 [EDITOR’S NOTE: POG has been the iconic drink of our Neighbor Island service for nearly four decades. On average, Hawaiian Airlines distributes over 66,000 pounds of POG in-flight each month.]