When the sun sets in Hilo on the Island of Hawaiʻi, the glow of molten rock lingers, lighting the night sky and bellies of vapor and gas clouds rising from lava fissures. This is the natural wonder of an eruption at Mauna Loa, the largest active volcano on the planet – standing at 13,681 feet above sea level and 30,000 feet from the sea floor – which stirred awake for the first time in 38 years just last week. According to the National Park Service, the event marks the first time since 1984 that Mauna Loa and the adjacent Kīlauea volcano are erupting simultaneously.

Volcanic activity is nothing new to Hawaiʻi’s people, including Hawaiian Airlines’ operations team. The archipelago state is home to six active shield volcanoes, with four – Hualālai, Kīlauea, the most active in the world, Kohala, Mauna Kea, and Mauna Loa – on the Island of Hawaiʻi. And with each significant eruption throughout Hawaiian Airlines’ 93-year history, the more experience our teams have stashed away in preparation for the next. 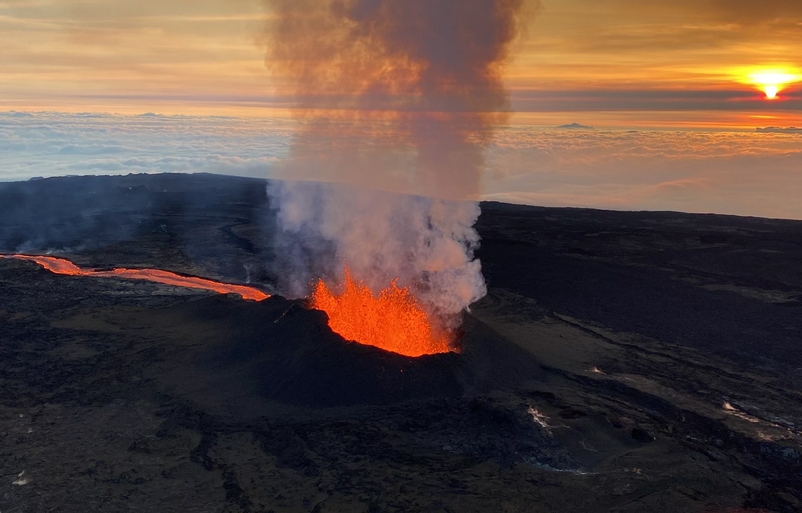 Credit: U.S. Geological Survey (USGS)/Department of the Interior/L. DeSmither
Aerial view of fissure 3 erupting on the Northeast Rift Zone of Mauna Loa the morning of Dec. 4.

“We’ve been around a while and know that when eruptions occur in the islands, they aren’t usually extreme pyroclastic ash events – that’s not the type of volcanoes we have in Hawaiʻi,” said Jon Snook, Hawaiian’s chief operating officer, who added that Mauna Loa is the second volcano-related event in his seven years at the company.

The U.S. Geological Service first reported the Mauna Loa eruption around 11:30 p.m. Sunday, Nov. 27, prompting our 24/7, Honolulu-based Systems Operations Control Center to spring into action. Snook recalled learning about the news that evening, noting it was an event expected to happen due to recent seismic activity on the mountain. To his team, understanding the situation and gathering all the facts were the first and most crucial steps before evaluating any potential schedule impacts. 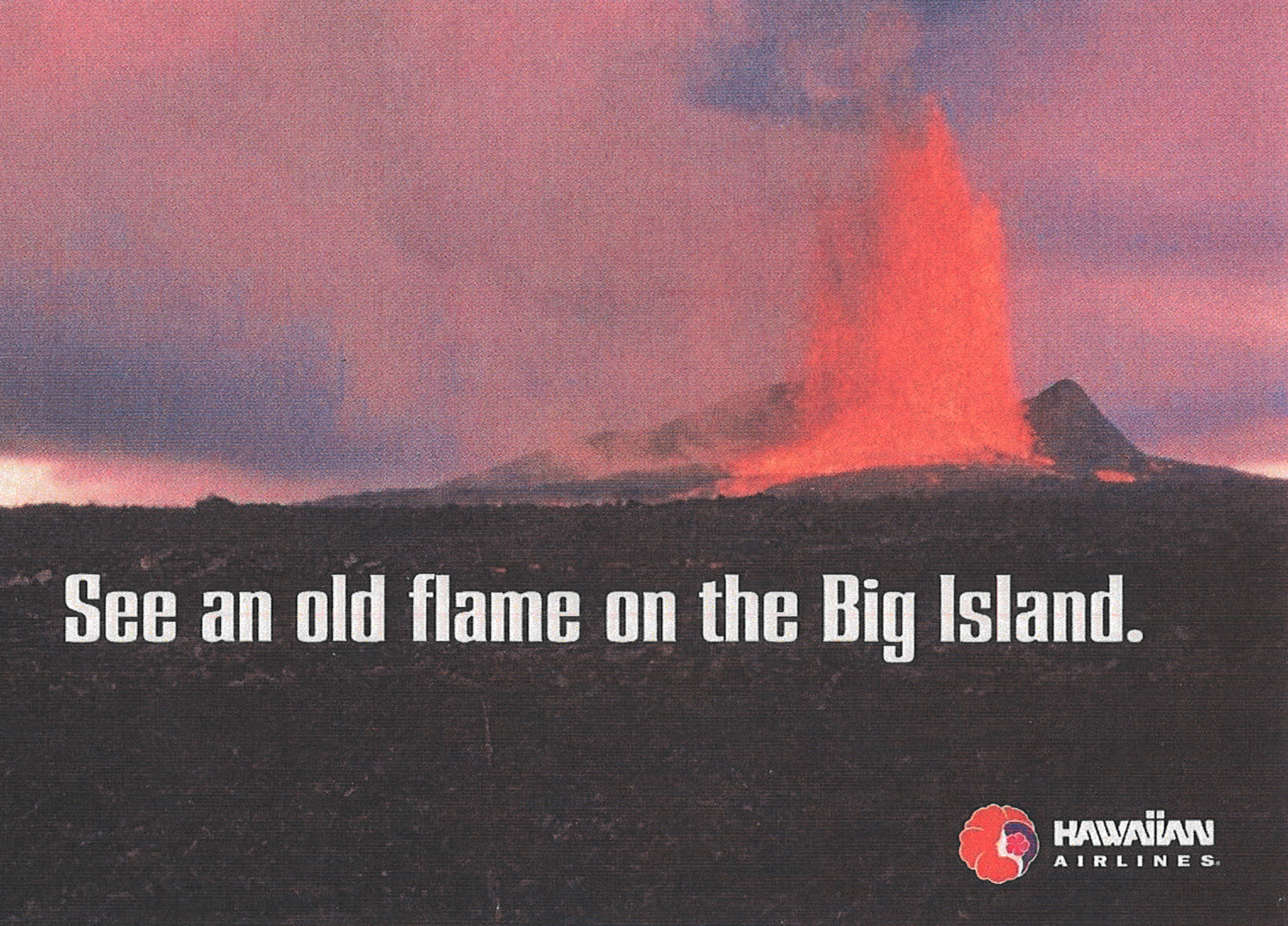 “Our dispatchers maintained close contact with the relevant authorities in meteorological and geological reports overnight. Before we could decide to cancel any flights, we needed evidence of ash (which is bad for engines) in the air, but officials couldn’t accurately measure levels until daylight,” Snook explained. “We decided that night to delay some of the morning’s first Hilo flights until we could better understand the air quality. Once the sun rose, reports verified there were no dangerous ash levels in the air, and we knew we could operate as usual. Our Hilo schedule ran a little later into the day because of those few front-end delays, but our operations didn’t experience any major impact.”

"So, we want to reiterate to folks concerned about their travel plans that it’s perfectly safe to visit – and even an exciting time to see something that we may not get another look at for 38 years (if history is our guide),” Snook explained.

He added, “We all take our guests’ and employees’ safety seriously, but we know to be cautious about doing anything definitive until we have a better understanding of what’s happening. That is the benefit of being around for 93 years and having gone through similar events in the past.” 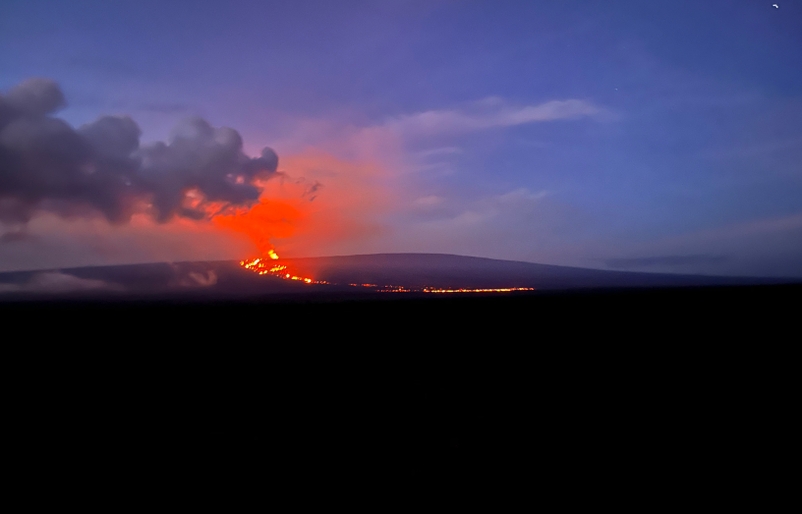 The 2018 Kīlauea eruption was the last significant volcanic event in Hawaiʻi to consume global news cycles as bright orange lava streams flowed down the volcano's broad slopes and destroyed 612 homes with fountains that reached heights of 260 feet. While Kīlauea also posed minimal disruption to Hawaiian's flights, Snook pointed to a wave of misinformation related to the size of the event and traveler fear as the biggest challenge.

“This event is similar to Kīlauea in that it is a relatively calm eruption compared to pyroclastic eruptions like the ones that recently erupted in Iceland and Tonga, and only a small percentage of the Big Island (Island of Hawaiʻi) is impacted. Mauna Loa’s lava flows currently aren’t going near populated areas. So, we want to reiterate to folks concerned about their travel plans that it’s perfectly safe to visit – and even an exciting time to see something that we may not get another look at for 38 years (if history is our guide),” Snook explained. 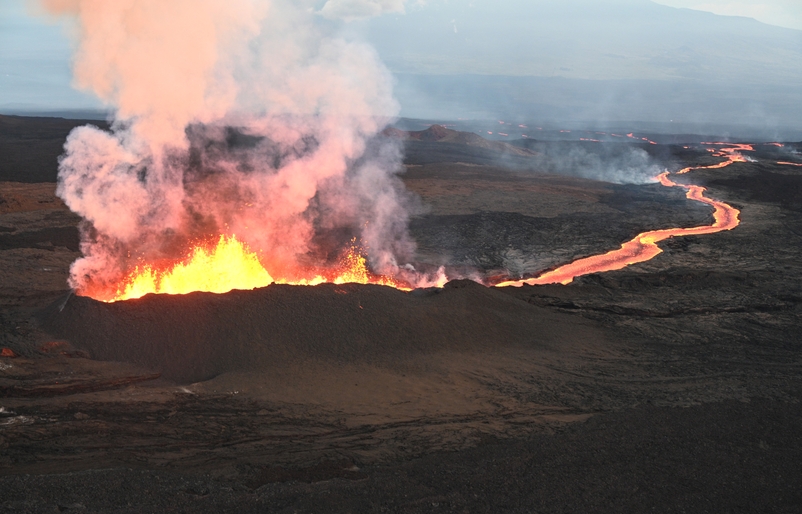 Aside from traveling to the Island of Hawaiʻi for a volcanic adventure, guests should also use the Mauna Loa event to learn about the cultural significance of volcanoes and lava in Hawaiʻi and what it means to travel pono (responsibly).

"This is a good time for malihini (visitors) and kamaʻāina (residents) to educate themselves before going to experience the lava so that they may stay safe and be respectful of the eruption’s spiritual and historical significance."

Many in Hawaiʻi observe lava and volcanoes with immense respect and consider the events highly sacred. In Hawaiian folklore, Pele, the goddess of volcanoes, venerated as a creator (and destroyer) of land, is believed to be responsible for eruptions and embodied in the fiery lava. Legend has it that Pele resides inside Kīlauea’s Halemaʻumaʻu Crater.

“Flowing lava is definitely a sight to remember, but it’s also, more importantly, an occasion to be revered,” said Manakō Tanaka, senior community and cultural relations specialist at Hawaiian Airlines. “This is a good time for malihini (visitors) and kamaʻāina (residents) to educate themselves before going to experience the lava so that they may stay safe and be respectful of the eruption’s spiritual and historical significance.” 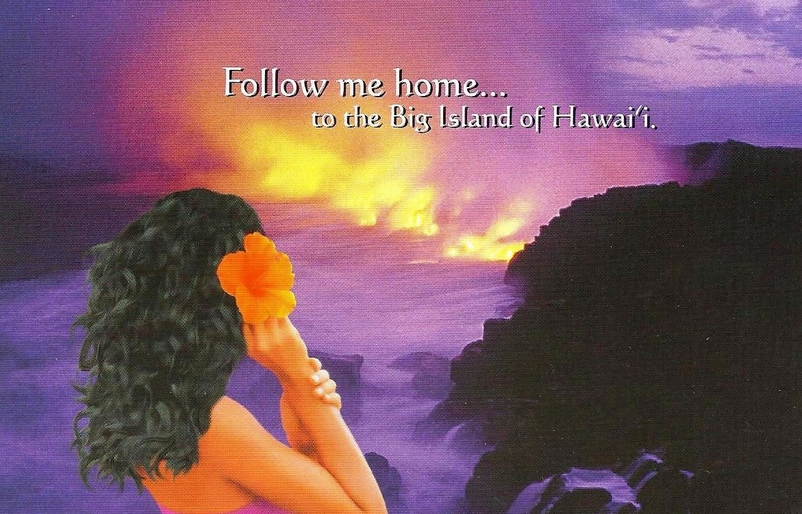 The eruption is also an opportunity to listen to moʻōlelo (stories) of those who have witnessed one of Hawaiʻi’s many volcanic eruptions over the decades. Hawaiian Airlines Archivist Monica Bacon is the daughter of one of the carrier’s first flight attendants who flew during the 1950 Mauna Loa eruption.

“My mom used to fly flights to the Big Island all the time, and she would recall passengers' great enthusiasm and interest to see the Mauna Loa eruption,” she recalled. “She was a student at the University of Hawaiʻi at Mānoa during the day, so she would usually work the late afternoon/evening flights and would come home talking about being able to see Mauna Loa’s glowing lava flows from the cabin windows.” 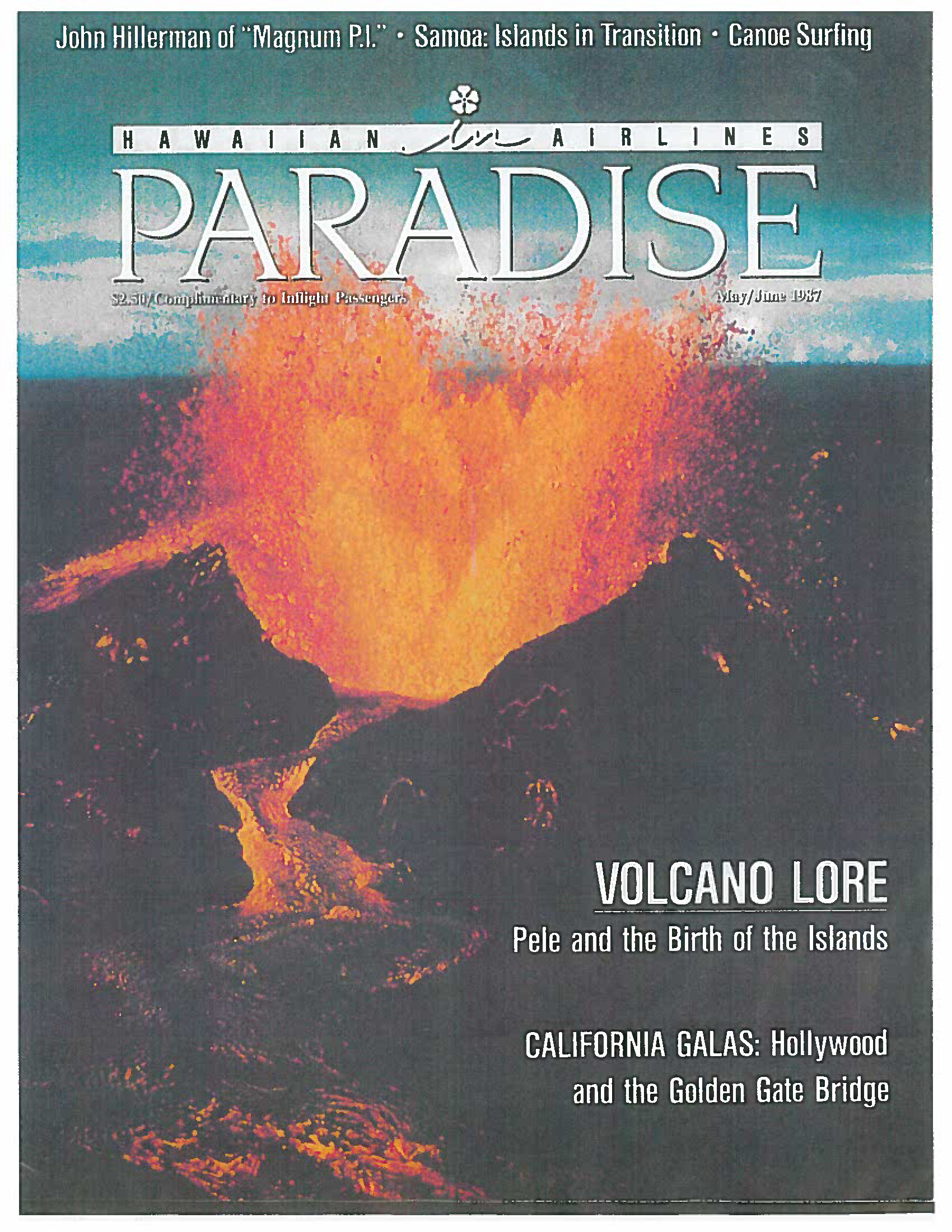 The cover of Hawaiian Airlines' inflight magazine from 1987

“For decades, visitors have been drawn to the Island of Hawai’i to watch the steam rise from the [Halemaʻumaʻu] crater’s vents and to drive through Hawaiʻi Volcanoes National Park,” shared Hawaiian Airlines Hilo Station Manager Luana Gibson while reflecting on the Kīlauea eruption’s impact in 2018. “One of my favorite memories [of the volcanoes] is when I hiked to the cliffs in Kalapana and watched the glowing lava kiss the sea while a tūtū wove a haku lei (a lei worn on the head) nearby and a local brother named Puna played and sang beautiful Hawaiian songs.”

While experiencing a volcanic eruption in Hawaiʻi is an extraordinary event, it is also a powerful and humbling force of nature to be respected. Travelers planning to visit the Mauna Loa eruptions should always do so safely and with deference to Hawaiian culture, surrounding communities, the land, and local laws. For the latest alerts and guidance on appropriate viewing areas, click here.