Born and raised in the Kingdom of Tonga, Zarka did not grow up around aviation. She left the archipelago after she finished high school and received a federally funded college scholarship to Sotra Videregaende Sko in Norway, where she studied public health and social work. She then interned with the International Committee of the Red Cross, working in its Norway, Spain, and Switzerland offices until she accepted a youth coordinator position with the Tonga Red Cross Society. During the return home, she met her now-husband, a Peace Corps volunteer, with whom she eventually moved to Hawaiʻi after he took a teaching fellowship at the University of Hawaiʻi at Mānoa.

The move to the Hawaiian Islands became Zarka’s launching pad into the aviation industry. 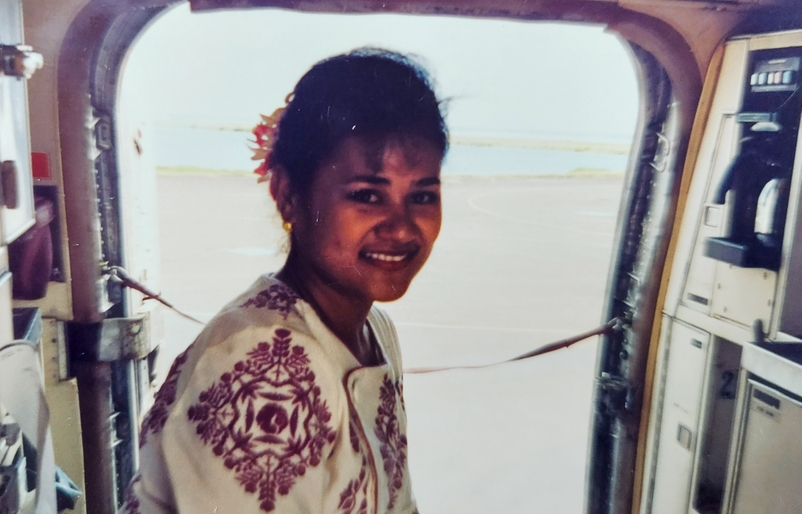 “When I first arrived in Hawai‘i, I sent out resumes and worked many small jobs here and there until Hawaiian Airlines finally hired me as a flight attendant,” she said.

Zarka joined Hawaiian in 1992, during the height of its DC-8 era when the carrier deployed the aircraft on a robust charter and commercial operation throughout the South Pacific. The year she was hired, Zarka experienced a life-changing moment while working a regular round-trip Honolulu-Pago Pago flight – which included a stop in Tonga before the return.

“I remember the captain called back to us [while flying over Tonga] and said that anyone who wants to sit up front [in the cockpit] is welcome to do so," she recalled. "I did and sat behind the first officer, and as the plane rolled down the runway, I thought to myself, ‘Hey, I can do this.’ When I got home from that trip, I asked my husband what he thought about me becoming a pilot and he said I should go for it."

Not long after that memorable flight Zarka found herself strapped to the seat of a single-engine Cessna. She signed up for an introductory lesson with a local flight school, and when the aircraft took off with her in the passenger seat, her new dream of becoming a pilot seemed to be within her grasp. Zarka went on to earn her private pilot license before taking a leave of absence as a flight attendant to obtain her instrument, commercial, and multi-engine pilot and flight instructor certificates – an achievement that took years of training with the support of a scholarship from the Ninety-Nines, a nonprofit that promotes the advancement of women in aviation.

In total, Zarka invested seven years into her pilot training, which included stints at various regional carriers and flight instructing in her spare time to build the hours needed to fly commercial jets. Then, on her 38th birthday in 1999, she received a call from Capt. Rho Johnson, the assistant chief pilot at Hawaiian Airlines at the time. “He asked if I was still interested in becoming a commercial pilot,” she recalled. “I said yes and got hired at Hawaiian as a flight engineer on the DC-10.” 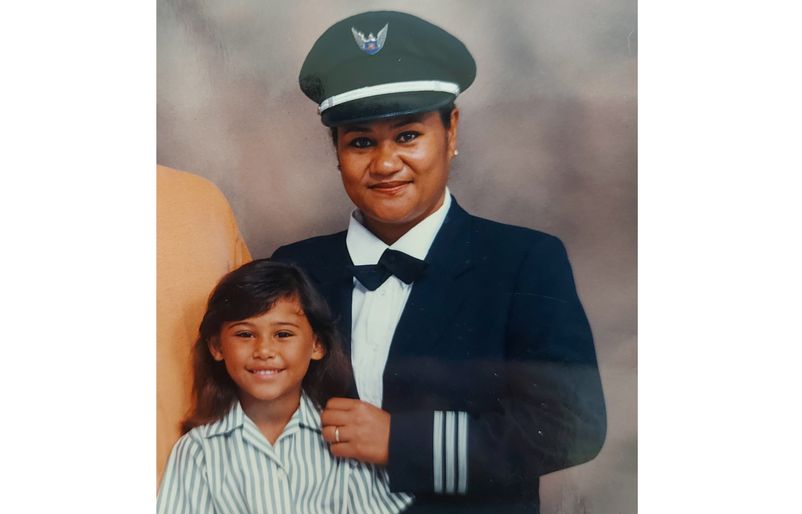 At that moment, Zarka not only made history as the commercial airline industry’s first Tongan female captain but also by joining a growing wave of women who were breaking barriers in a male-dominated industry. “When I was hired, women made up four percent of pilots of the industry – now it’s about eight percent industrywide – and even higher at Hawaiian,” she said. Today, over nine percent of Hawaiian Airlines' pilots are women, making it a leader among U.S. carriers.

Back in the day, Zarka said the job required having thick skin and stern focus. “There was plenty of bias against aspiring flight attendants, women, and Polynesians,” she said. “Like Ginger Rogers dancing with Fred Astaire in the movies: she could do everything he could but had to do it in heels and backward, but only received second billing for all her efforts. It often felt like females needed to be twice as good as their male counterparts to be considered equals in the cockpit,” she added, explaining that the airline industry has come a long way. "Now, we are judged more often on our abilities and performance.”

Zarka flourished as a pilot at Hawaiian Airlines, initially taking on the role of a first officer for our Boeing 767 transpacific fleet, which officially retired in 2018, before becoming a captain in our Boeing 717 Neighbor Island fleet, which today operates nearly 115 daily flights statewide. 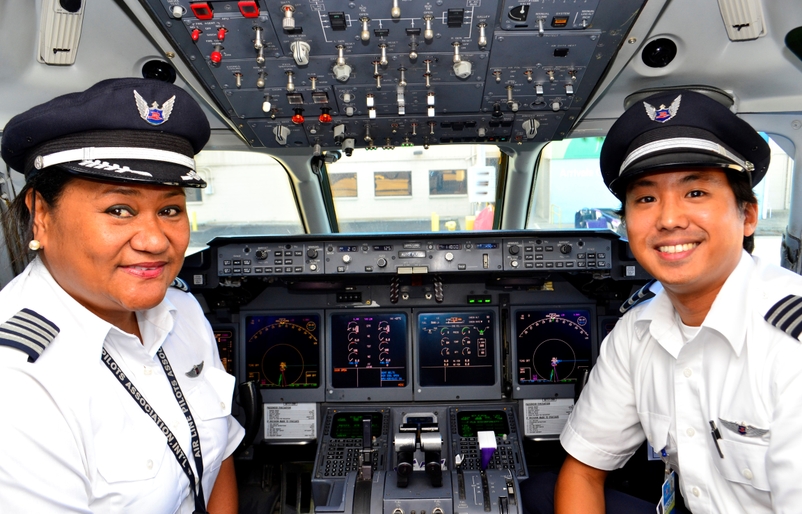 And while flying long-haul aircraft gave her a chance to see and experience the world, Zarka valued the Boeing 717 schedule more because it allowed her to continue flying and prioritizing family time.

“I remember once, flying the [Boeing] 767 to [Las] Vegas, and despite all the bright lights and excitement, I was still wishing that I could just be home instead of overnighting at a hotel. When I transitioned to flying Neighbor Island, I was able to get back home to my family every night,” she said.

“When I was flight instructing, I would take Maria, my eldest daughter, on night flights. Those flights, and the traveling we did on my non-revenue benefits with Hawaiian Airlines, seem to have stimulated Maria's desire to fly,” Zarka said. “Then Kaimana, my youngest daughter, caught the bug after flying with her sister, and later in high school, she too decided to become a pilot.” 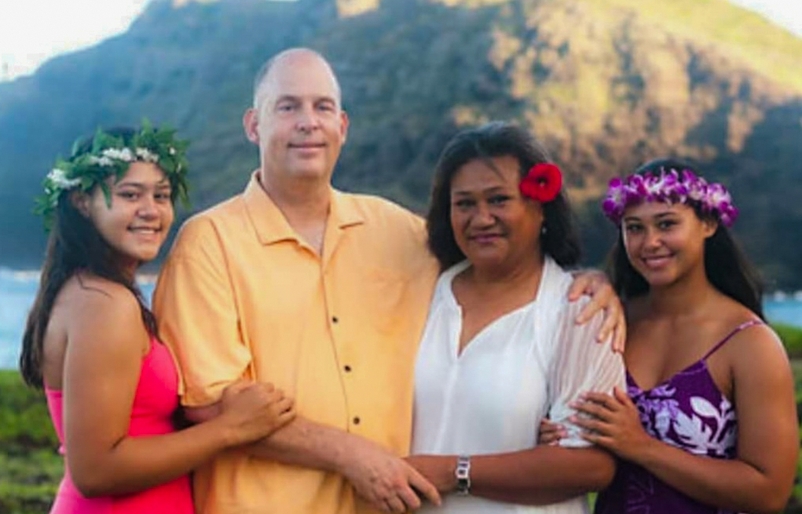 Through her daughters, Zarka’s legacy will continue at Hawaiian Airlines. Maria, who flew with Republic Airlines in New Jersey for two years, was recently hired as a Hawaiian Airlines Boeing 717 pilot and is set to begin her training in April. Kaimana is on a scholarship studying aeronautical science at Embry-Riddle University in Arizona and on a similar glide path, with Private and Instrument licenses already in her back pocket; plus, halfway through her Commercial certification, with the Multi-Engine rating on the way. Kaimana also intends to apply to be a Hawaiian Airlines pilot, Zarka shared.

Aside from her daughters, Zarka wants to see more women, especially those of color and from Tonga, in the cockpit. “When I was young, every little girl in Tonga hoped to become a flight attendant or nurse, but I would like to see a shift where they want to become pilots and doctors instead,” she said. “I feel a duty and responsibility as the first Tongan woman commercial pilot captain and try when I can to be a role model for those girls.”

Zarka has worked with the Ninety-Nines throughout the years and encourages women of all ages to apply for the nonprofit’s scholarships. In her free time, Zarka speaks about flying and piloting opportunities to visitors at the Pearl Harbor Aviation Museum as well as students during career days at Hawaiʻiʻs public schools. 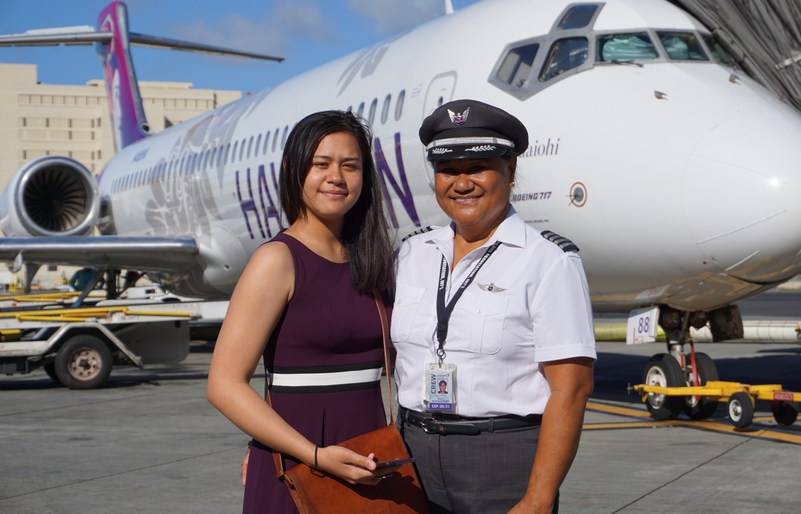 “A lot of young women come and talk to me, especially Polynesians and other Tongans, who are interested in flying and ask for my advice. I always tell them that they must believe in themselves and aim high,” she said. “If becoming a pilot is a dream, that dream can be life-altering; but first, take an introductory flight. If the excitement is still there after the take-off and landing, then flying is a career ride to a natural high."

Zarka recently took an extended break from the cockpit for personal matters but is already planning her return. She looks forward to resuming her Neighbor Island schedule – perhaps even one day captaining a Hawaiian Airlines Boeing 717 with one of her daughters in the first officer seat.