When First Officer Russell Flynn and Flight Attendant Maydell Morgan learned Hawaiian Airlines would be helping relocate thousands of Afghans escaping the Taliban regime, they considered the mission a once-in-a-lifetime opportunity to give back. The important job they’d been tasked with had instilled in them a sense of urgency and kuleana (responsibility) to share our Hawaiian hospitality with refugees on the first leg of a long journey toward rebuilding their lives in the United States.

Flynn and Morgan joined fellow crewmembers and a support team earlier this month to operate a series of Hawaiian charter flights under the Civil Reserve Air Fleet (CRAF), a U.S. Department of Defense program that enlists commercial airlines to augment air lift during emergencies that exceed the military’s capabilities.

Over six days, Hawaiian crewmembers onboard 13 flights operated by two of our wide-body Airbus A330 aircraft welcomed more than 3,000 Afghans arriving from Europe at Philadelphia and Dulles international airports and transported them to the safety of military bases in Indiana, New Mexico, Texas and Wisconsin. 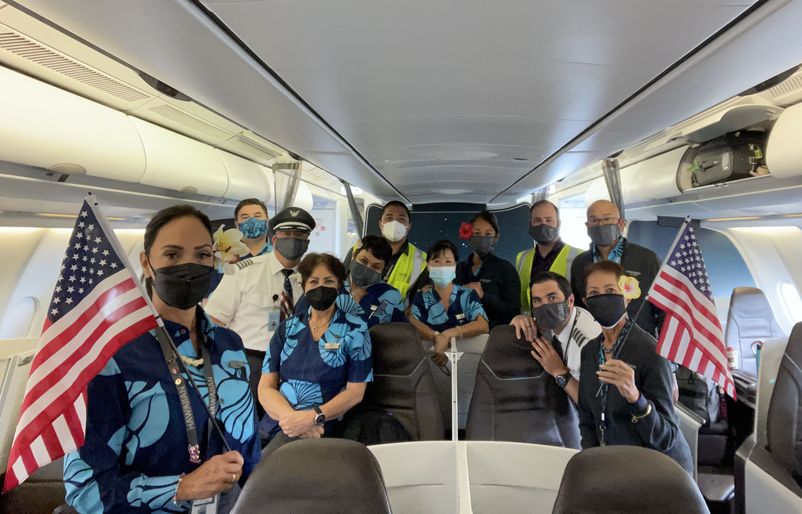 Immediately after signing up for the flights, Flynn phoned his wife to ask for gift ideas for the children who would be onboard.

“These people don’t have anything, what can we do?” he recalled asking his wife, who was conveniently outside a popular Honolulu discount store when she took the call. “We made them 300 goodie bags. Nothing crazy, just some index cards, a piece of origami paper and a couple of coloring pencils.”

At the end of one flight, Flynn walked through the cabin and asked flight attendant Kawehi Thoene if the children had enjoyed the gifts. “She said it was a huge hit,” he recalled, as Thoene reached inside her wallet and pulled a piece of origami paper folded into a boat. “I’m going to treasure this forever,” she said. 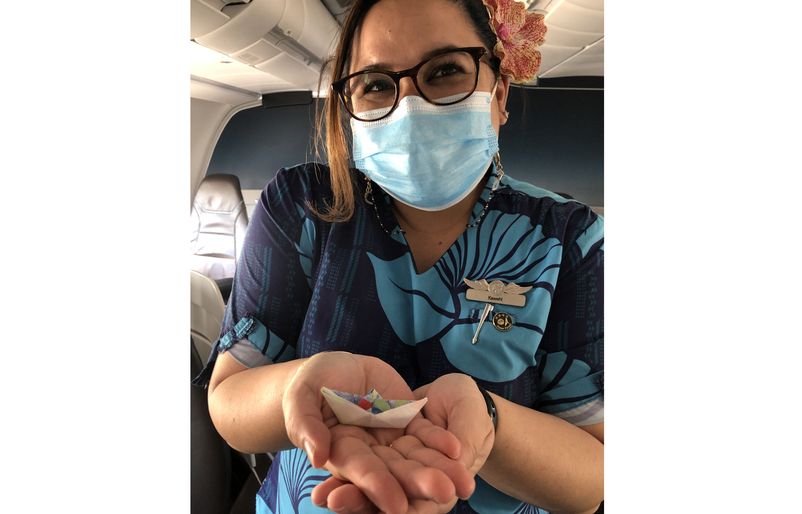 Flight attendant Kawehi Thoene with an origami gifted by an Afghan guest.

Morgan said this month’s CRAF flights were her first work assignments after being on leave for more than a year due to the COVID-19 pandemic. Having recently lost her husband to cancer and being overwhelmed by the support she received from strangers, she felt compelled to help the Afghans, so she traded a Honolulu-Boston trip for the military charters between Dulles and Indianapolis.

“I needed to give back; I needed to take care of these people,” recalled Morgan, who as a 53-year veteran has worked her share of military missions to support troop movements but had never welcomed onboard civilians in a humanitarian evacuation. “They have nothing and they’ve been through so much.”

Upon their return home to Hawai‘i, Flynn and Morgan, who were supported by a team of Hawaiian Airlines mechanics, loadmasters, security personnel, and other ground staff, sat down with us to reflect on what both agree are the highlight of their careers.

What motivated you to sign up for our flights?

Maydell: I was so very proud to know that the U.S. government and Department of Defense considered Hawaiian, as little as we are next to the big carriers, to contribute to this important movement. With further thought, I realized, ‘why not,’ after all Hawaiian and our people exude the Aloha spirit and, as we mālama (care for) our guests on our scheduled flights, it would carry over to our Afghan guests. I felt compelled to be a part of this humanitarian movement. I knew it was my calling. I have been blessed with so much; I needed to give back and this was a perfect way to accomplish it – to mālama these people, who are less fortunate and who have been through horrific challenges. I would not hesitate to be of service again to these beautiful people.

Russell: I was glad to see Hawaiian would be a part of the evacuation effort. This is one of the few times where all the U.S. airlines get to work together instead of competing with each other and I was excited to be a part of it. I have flown a number of military charters at a previous airline, but they were always transporting soldiers and equipment. This was an opportunity to help civilians and I couldn’t pass it up.

Did you have to do anything different to prepare for these missions?

Maydell: The crews were briefed on cultural traditions, nuances and the do’s and don’ts – simple, but important gestures.

Russell: These flights posed some logistical challenges and we had to do some homework before we arrived at the aircraft. We operated from airports that are not part of our usual network, so we had some extra studying to do. Hawaiian Airlines did a fantastic job by giving us as much advance information as they could, but there’s always something that surprises us and keeps us on our toes. For example, the ground crew at one air base wasn’t used to civilian aircraft and their procedures didn’t exactly match ours. It didn’t matter – everyone worked so well together that we were able to figure everything out. 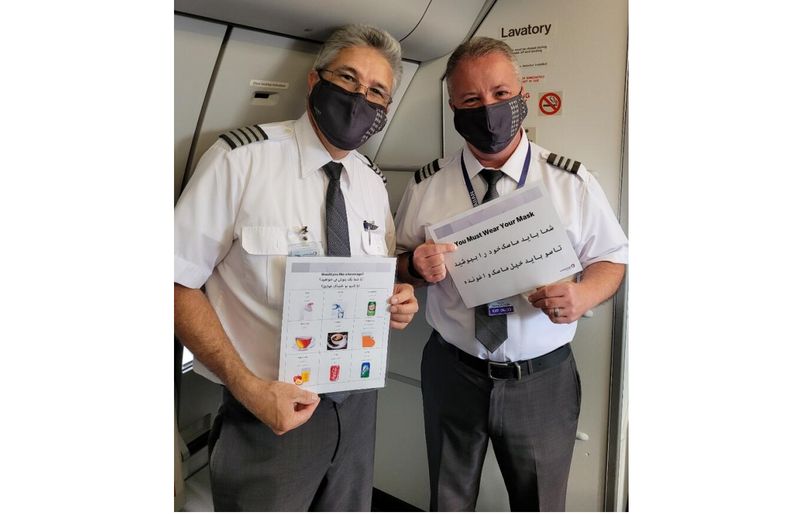 Can you briefly walk us through one of your days?

Maydell: A typical day of these missions was one that required us to hold each other up. The emotions that we experienced were more than we had anticipated. The routine of preparing for any flight was prevalent, but a typical day of these missions was filled with highs and lows of emotions. We had to stay strong. We felt so much gratitude, aloha, ‘olu’olu (pleasantness), and ha’aha’a (humility) from these Afghans – they were beautiful people!

Russell: We left the hotel about 90 minutes before departure time. As this was a military flight, we were driven straight to the aircraft and I was immediately able to start the preflight walk-around inspection. The captain confirmed all the logistical details, such as fuel loading, pushback procedures, and so on, with the ground operations staff and the flight attendants began their cabin preparations. With the walk-around complete, I headed to the flight deck to load the flight plan and make sure there were no maintenance or cabin issues to be addressed. We were lucky to have a mechanic traveling with us on these flights so that part was easy! By the time the flight deck was ready, boarding had started. We had a few spare minutes, so the Captain and I would go back to the cabin to say hello to some guests. Runway markings and taxiway signage follow the same standards around the world, so navigating around an unfamiliar airport isn’t as daunting as it might sound. 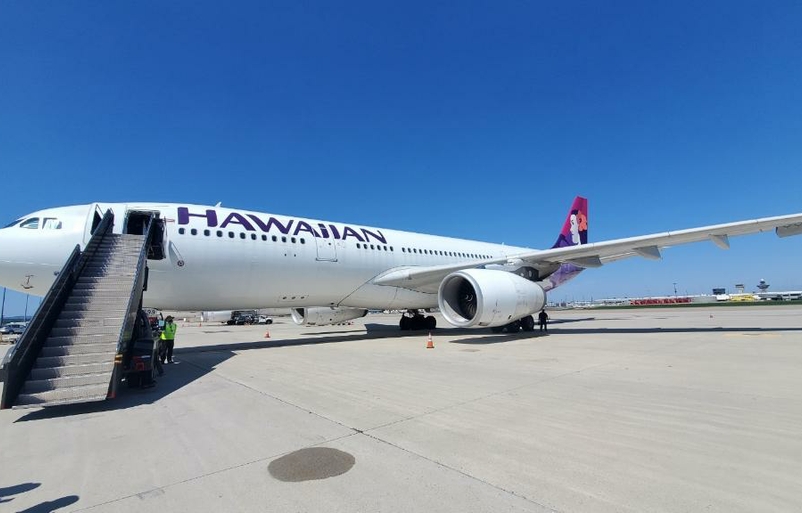 One of our Airbus A330 aircraft ready to welcome onboard Afghan refugees at Dulles International Airport.

The journey to Wisconsin is much shorter than a normal [Hawaiian Airlines] Airbus A330 flight, so it was over before we knew it. Our approach and landing procedures are the same at every airport, but this time we were met by a truck as we landed and turned off the runway. The truck had a big sign on it that read ‘Follow Me,’ and that’s exactly what we did. We were escorted into our parking spot and stairs were brought up to the plane so our guests could disembark. Within 45 minutes a fleet of busses were headed to the passenger processing facility and we were ready to head back to Dulles.

Were there any special experiences with our guests that stood out to you?

Maydell:  This was the most touching and moving flight experience I have had in my 53 years of flying. I have been truly blessed, rewarded and fortunate to have been a representative of Hawaiian and Hawai‘i  in this great and heartwarming movement.

Russell: Too many to list. Listening to the cheers from the guests [in our cabin] when a soldier in Wisconsin was reunited with his wife (one of our guests); watching the Captain work with a soldier to help a disabled guest board the aircraft; seeing a newborn infant being shielded from the sun with a piece of cardboard – realizing that some people were carrying everything they owned in the world in a single plastic trash bag. But most importantly, seeing the look of gratitude from our guests as they boarded the plane. They had no idea what was ahead, but they knew they were safe and that we would look after them. I don’t speak their language, but I didn’t need to – the look in their eyes said it all. 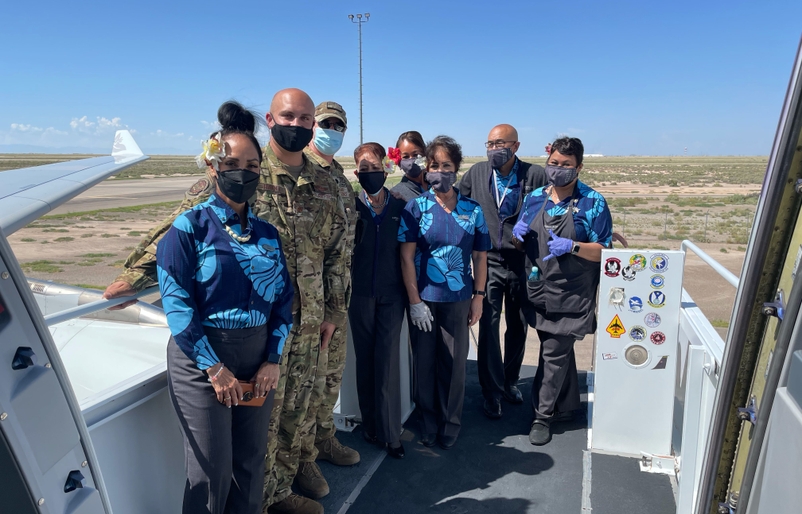 What do you hope our new guests take away from this experience as they start their new lives in America?

Maydell: I hope and pray that all, if not many of these beautiful people will have bright futures and embrace the freedoms and opportunities that are available to them in our great land. May they move forward with their heads held high and love and aloha in their hearts. They are free and need not fear for their lives every single day.  It is with my sincerest aloha that they will thrive in our land.

Russell: I can’t begin to imagine what a crazy, bewildering experience this must have been for these people. The pilots, flight attendants, mechanics, loadmasters, soldiers, ground crew, bus drivers, etc. all worked together to make these passengers feel as safe and comfortable as possible. It was a privilege to be a part of this effort and I truly hope the Afghans feel that their lives will be better now. It will be a massive adjustment for them, but I hope they remember their flight on Hawaiian Airlines as much as we will remember them. I’m sure they have never heard the term ‘aloha’ before, but they definitely experienced our aloha spirit, even if it was just for a few hours.

Strategically located in the center of the Pacific, Hawaiian Airlines has a proud history of supporting military flying, including the two previous times the CRAF program was activated. In Spring 2003, Hawaiian's transpacific jets supported 22 missions that transported approximately 4,000 U.S. soldiers for wartime assignments. In 1990-1991, Hawaiian flew more than 200 charters for Operation Desert Shield/Desert Storm. In early 1991, Hawaiian also flew home the first group of Hawaii-based U.S. Marines from the Middle East.