In the almost nine decades that we’ve proudly served the islands, we’ve evolved through time. Among the most notable and visible changes were the 17 iterations of uniforms worn by our front-line teams. They reflect iconic trends and fashion movements throughout history – with a Hawaiian zest.

Our in-flight getups, for example, have ranged from simple grey uniforms with a range of military-inspired caps in the days of World War II and the retro “Tam” design that embodies 1970’s flare, to today’s vibrant, Island-inspired uniforms created by renowned local designer Sig Zane.

Take a look at some of our favorite uniforms throughout our deep-rooted history in the Hawaiian Islands: 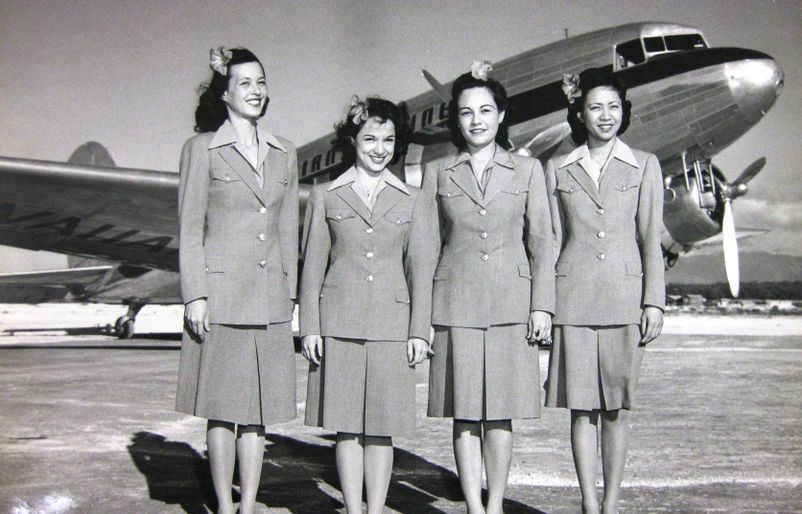 The first Hawaiian Airlines flight attendant serviced our 24-seat DC-3 aircraft in a grey getup. Later on, we added a few more fashionable features, including a military-inspired hat and a black stripe on the jacket sleeve. 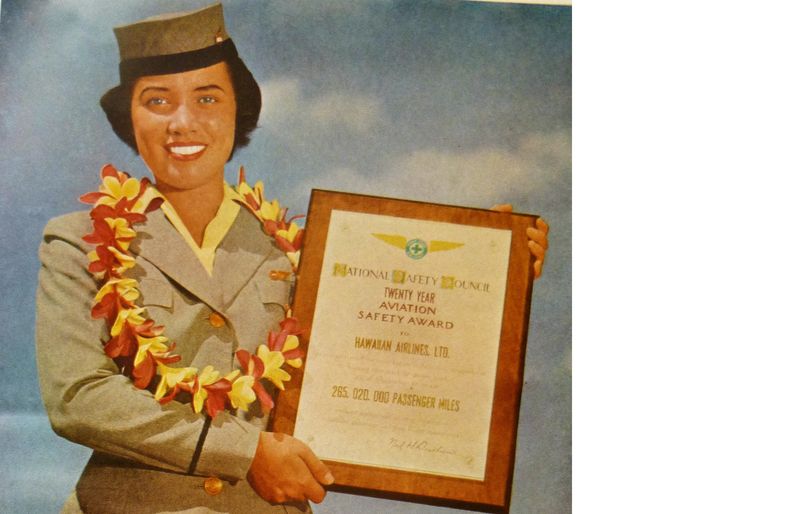 In 1949, a flight attendant shows off a prestigious award from the National Safety Council and sports the updated grey suit with the new military cap and the black stripe on the cuff. 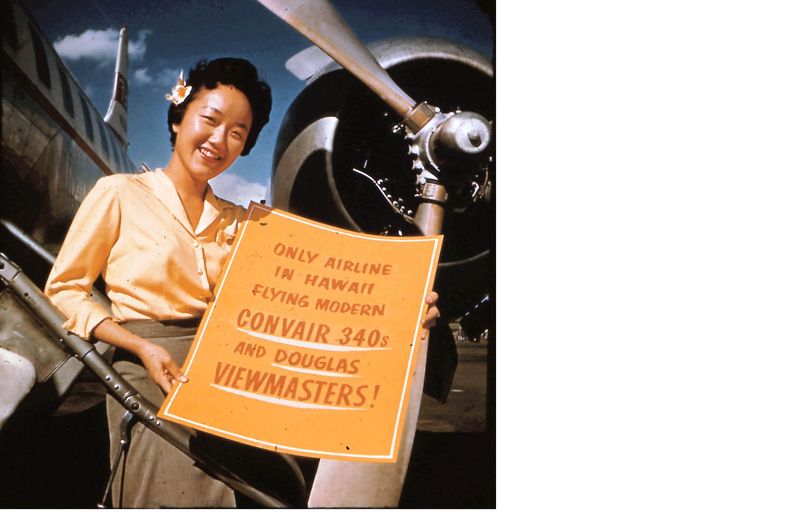 In the 1950s, flight attendants had the option to skip the military cap and adorn their hair with fresh flowers. 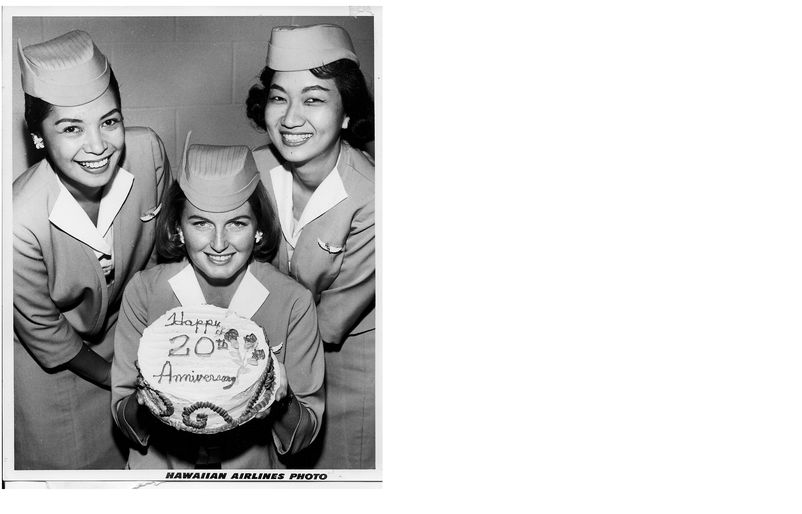 In the 1960s, we changed the color of our uniform to blue. Flight attendants also began sporting a new beret-style hat and metal wings. 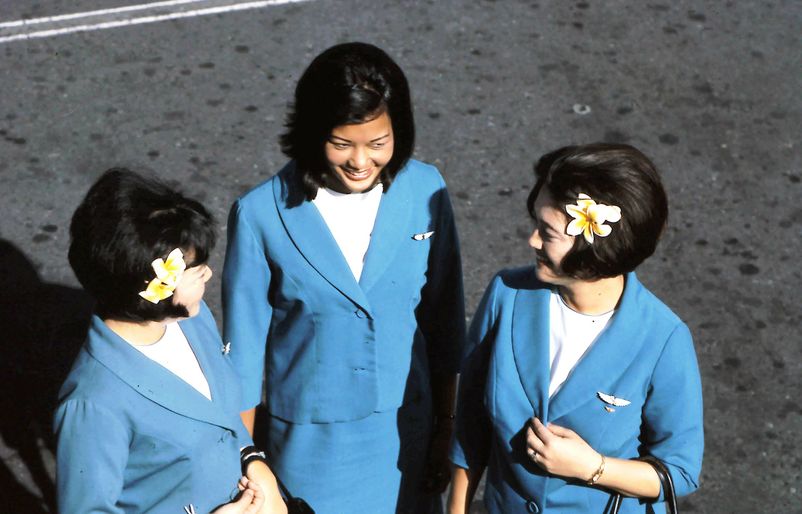 When we launched our new DC-9 Royal Fan Jet into service, we tagged on a brand-new line of high-fashion uniforms designed by Fashions by Hino, one of Hawaii's leading dress manufacturers at the time. 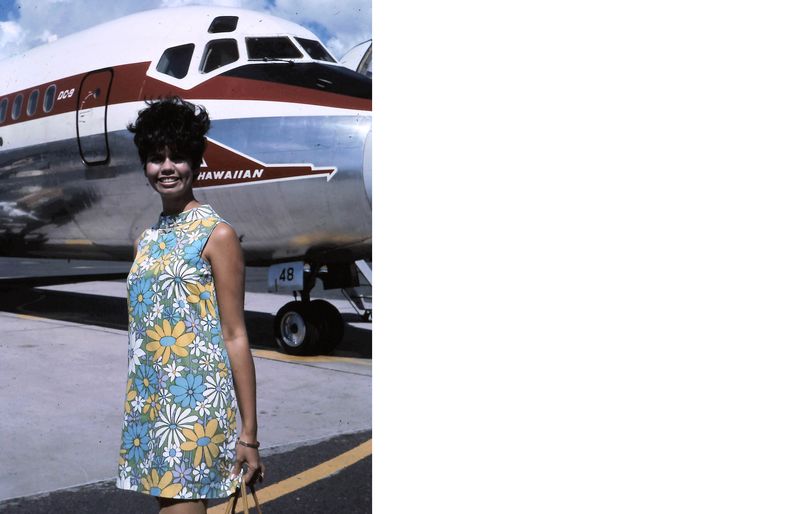 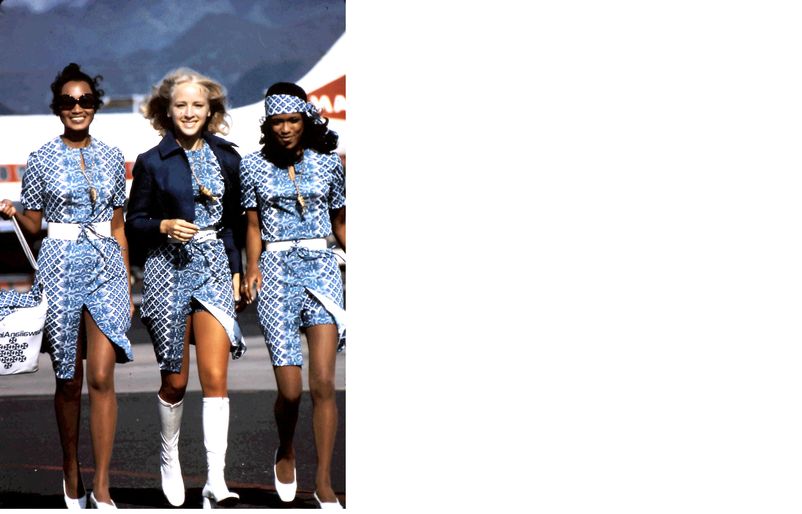 Leading the way in airline fashion, Hawaiian Airlines launched a new two-piece outfit designed in partnership with Richard Tam of San Francisco. The accessories included low-heeled pumps, lace boots and sandals, which were all white. Scarves were used as headgear or sash belt or an ascot tie. There was also a golden pendant worn on a chain around the neck – a stylized fish as a symbol of strength and good luck. 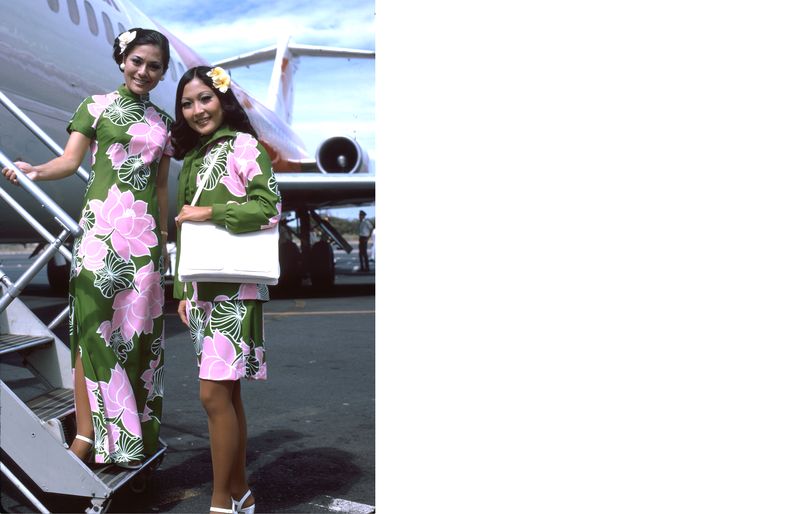 Designed by Malia International, the floral-print outfit was worn as a long dress, a short dress, or a two-piece with an optional jacket for all outfits. Fresh flowers and white shoes finished off the uniform. 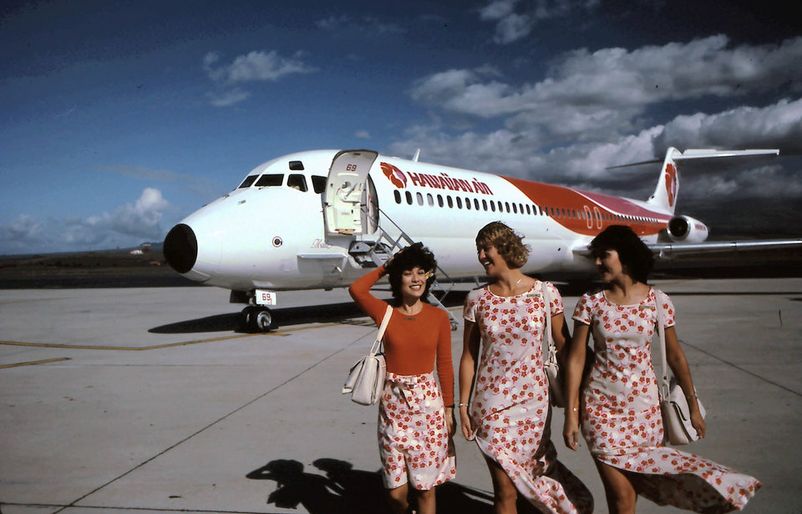 Another uniform designed by Malia International, featuring a jumpsuit, a long dress, jacket, and solid or print scarf. 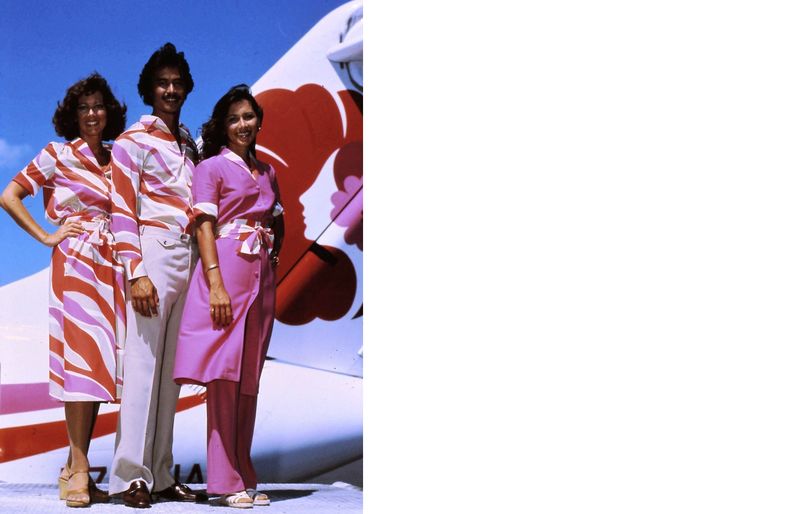 The 1979 uniform rocked a print with brilliant hibiscus red and bright orchid colors that was created for our 50th anniversary. Flight attendants were able to make 20 different outfits from a wardrobe of six garments. 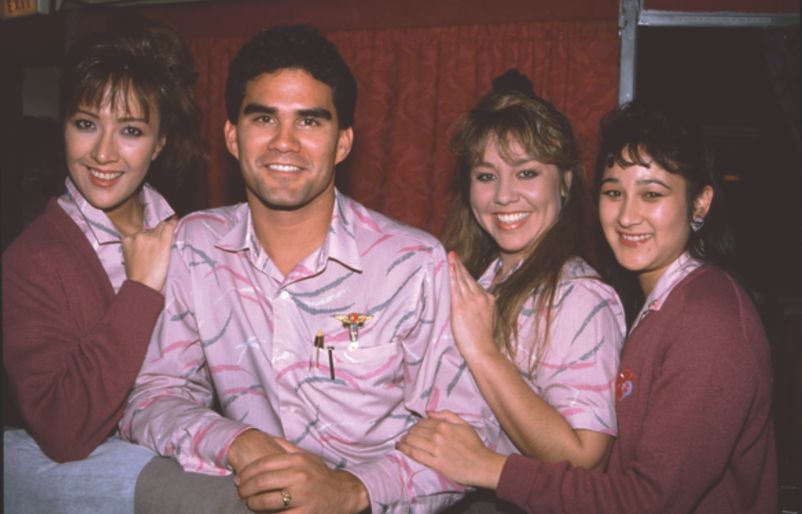 More men began joining Hawaiian Airlines' in-flight team. We launched these uniforms as part of our 60th anniversary, featuring a more contemporary and professional look to represent the growth of our company. 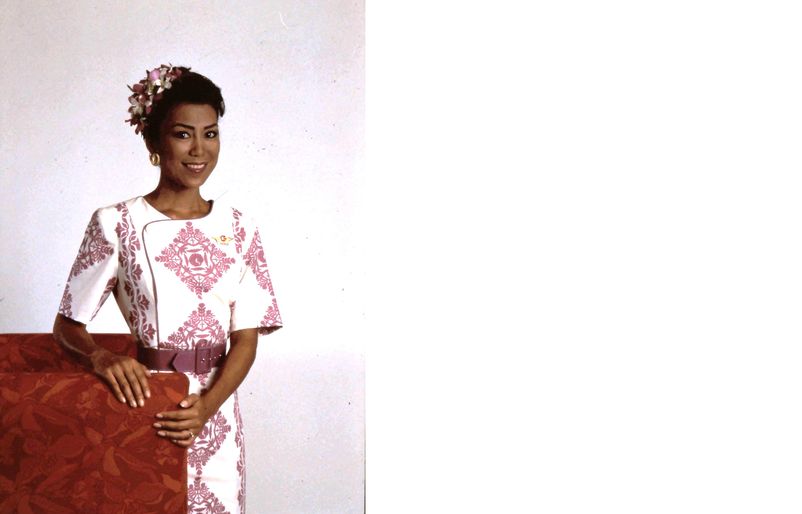 Introducing our 1990's uniform, which was inspired by the traditional Hawaiian quilt. The intricate design included indigenous Hawaiian plants and flowers and Pualani on the center of the chest. 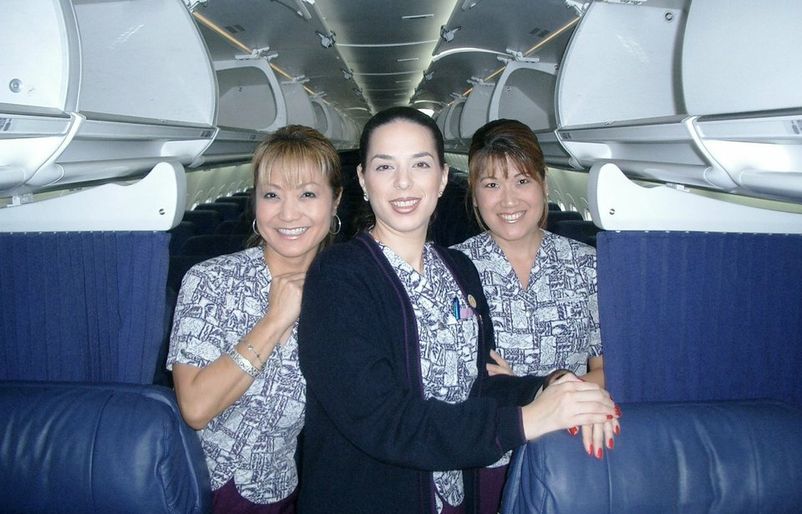 We welcomed the millennium with a uniform adorned with a Hawaiian-inspired print, including the iconic ‘Iwa bird. 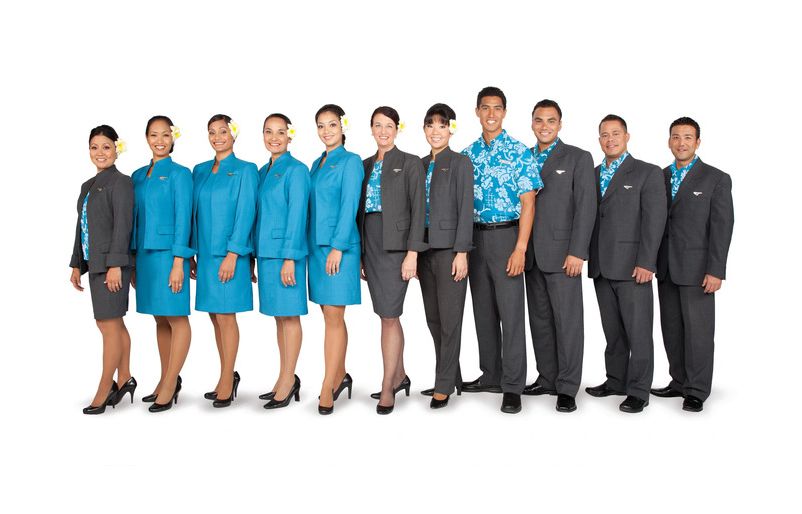 At the start of our 80th anniversary, we launched a new line of uniforms with prints created by local designer Emma Howard. Its signature "Makahiki," print featured several Native Hawaiian-inspired elements like fish, petroglyphs and indigenous birds. The most noticeable change in the new uniforms? The color palette. Azure – representing the color of Hawaii’s ocean and sky – and grey are now the dominant colors, with our company's traditional purple appearing as an accent color. 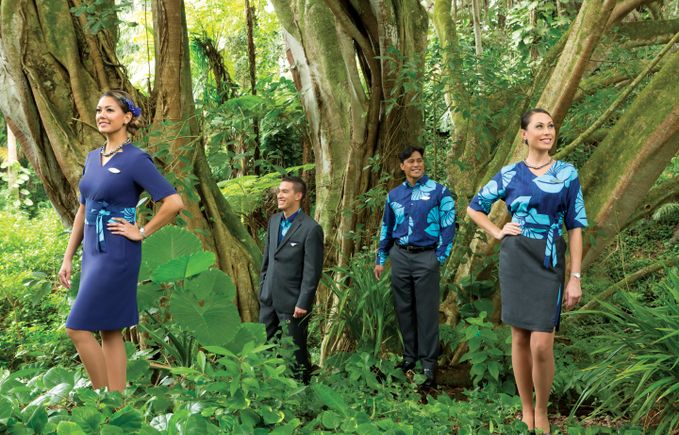 In 2016, we partnered with Hawaii-based designer Sig Zane to create our current uniforms. The Kū Mākou print comprises two main elements: 'ohe kapala (bamboo stamps encompassing intricate designs often used to create repetitive patterns in traditional kapa decoration), and the lehua blossom (a native Hawaiian plant with many culturally symbolic meanings that is often used as adornments in hula or other ceremonies). Colors incorporate the distinctive purple associated with Hawaiian Airlines as well as the Pacific blue of the previous uniforms.