The Hawaiian proverb “I ka wā ma mua, ka wā ma hope,” or “The future lies in the past,” carries a sentiment that is deeply woven into the fabric of Hawaiian Airlines. The endeavor to preserve our 90-year history hasn’t been an easy feat; however, sharing these moments, milestones and memories has played a pivotal role in telling our story to the world.

We owe our gratitude to Capt. Richard “Rick” W. Rogers, a longtime company pilot who, upon his retirement, worked enthusiastically to keep our mana‘o (thoughts, knowledge) alive as our airline’s archivist. Though it is with great sadness that we share Rogers, 70, passed away last month doing what he loved most: flying recreationally on O‘ahu’s North Shore. 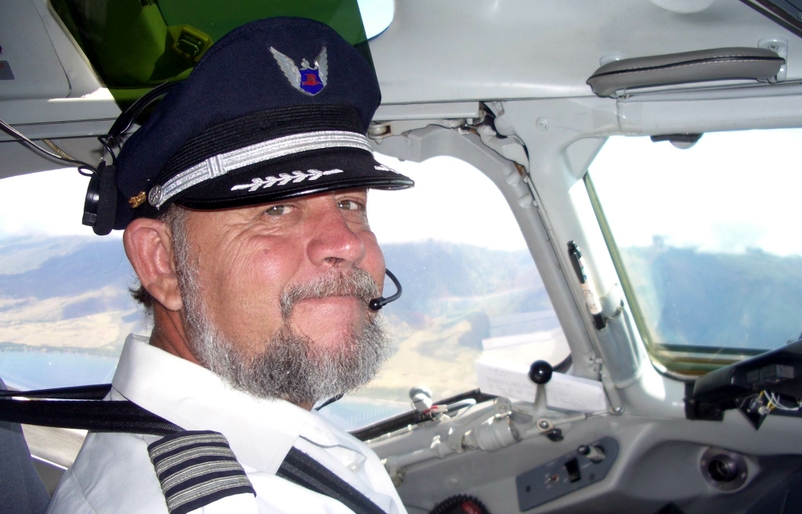 Rogers in 2005 when he was an active Hawaiian Airlines pilot.

As we reflect on the life and achievements of our beloved colleague and friend, this post will serve as Rogers’ final feature in the “Flyback Friday” series.

Rogers’ life was nothing short of extraordinary, and he kept his cup overflowing with a love for history. A jack of all trades, he was a father, grandfather, husband, pilot, Army veteran, historian, shipwreck diver, hunter, flight instructor, beachcomber, entrepreneur, artist, farmer, fisherman, and author.

When not carefully curating our rich history, Rogers loved to fly his glider plane out of the Dillingham Airfield and worked passionately to preserve the history of Hale‘īwa, his hometown on the North Shore. One of his efforts led to the installation of plaques identifying sites of historical significance throughout Hale‘īwa. 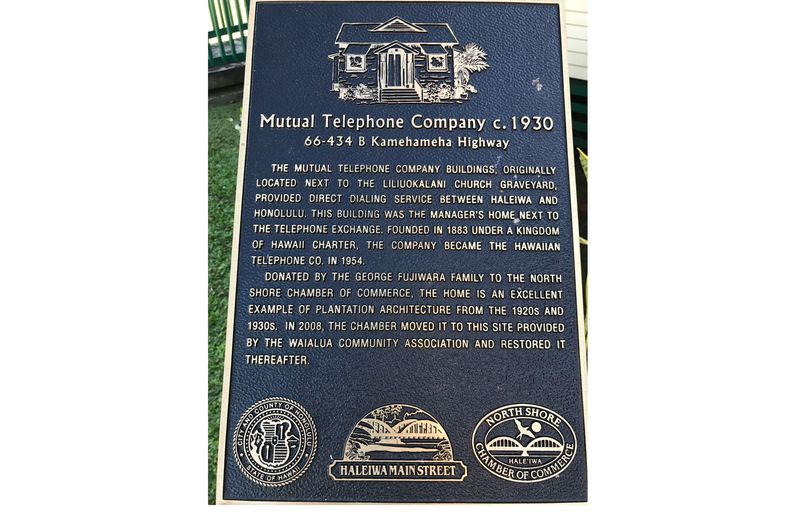 One of the historical plaques Rogers helped create alongside local historical groups.

Born in Cape Girardeau, Missouri, Rogers launched his adventurous career on the shores off Vietnam as a salvage diver during the war. He became hooked on flying after taking a lesson while in dive school and later used his army earnings to pay for his pilot’s license. 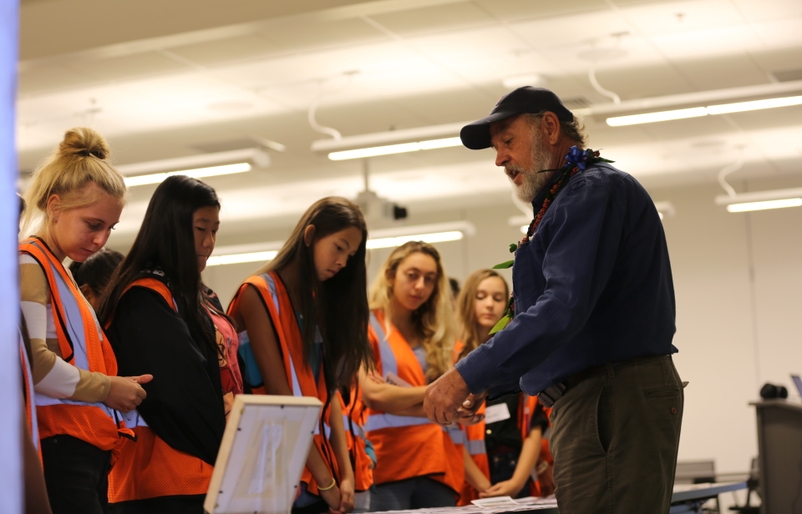 Rogers sharing photos of women throughout our history during a 2018 Girls in Aviation Day event at our headquarters.

In January 1987, after several years of flight instructing and operating scenic air tours around Hawai‘i, Rogers joined Hawaiian Airlines as a Dash 7 pilot. Over the course of two decades, he experienced our airline’s fleet and network evolution from the flight deck, operating our DC-8s, DC-9s, Boeing 717s and 767s.

When Rogers wasn’t transporting our guests, he was raising four kids with his wife Lois and pursuing a career in marine archaeology. He recounted years’ worth of diving adventures in a book he published in 1999, called “Shipwrecks of Hawai‘i: A Maritime History of the Big Island.”

Rogers retired in 2010 and naturally segued into an archivist role after we reacquired our first plane, the Bellanca CH-300 Pacemaker, in 2009, ahead of our then-80th anniversary. For the next decade, he dedicated himself to cataloging the volumes of historical artifacts in our company collection, including images, posters, correspondence, manuals, uniforms, models, trinkets and more. 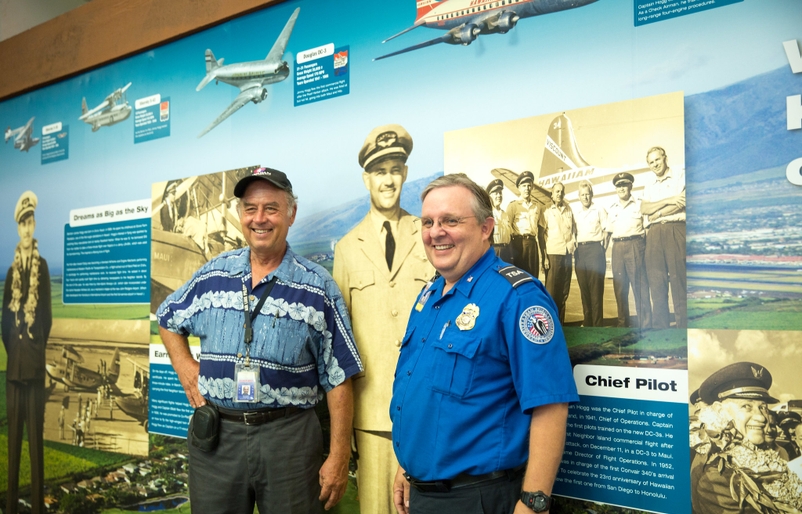 Rogers, pictured left, during the reveal of the Capt. Jimmy Hogg wall, which can still be viewed today at OGG.

He was known for his quirky personality and creative archives projects, including (but not limited to): 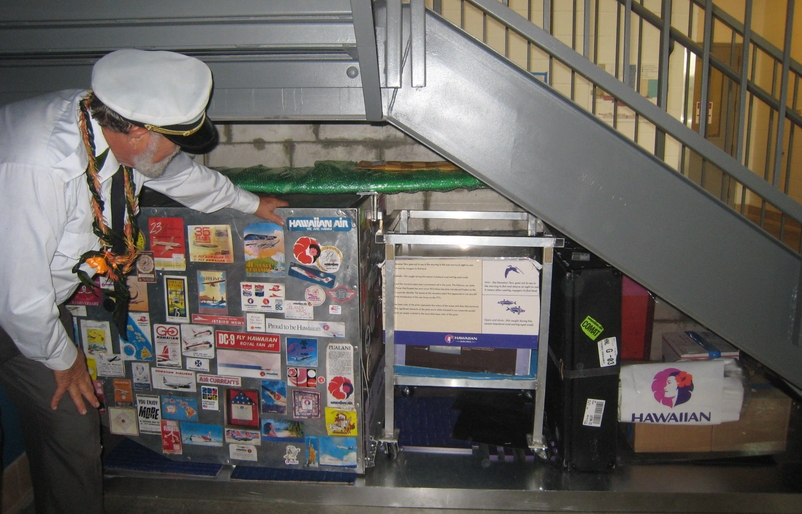 Rogers in 2017 showing the camera a time capsule that is still concealed beneath a stairwell in the Charles I. Elliott Maintenance and Cargo Facility.

Rogers has contributed to our Mana‘o blog since it was launched in June 2018 and served as the proud owner of the “Flyback Friday,” a monthly series revisiting noteworthy company accomplishments. He was also a regular contributor to our in-flight magazine, HanaHou!, where he penned a “From the Archives” column featured in the ‘Ohana Pages.

A memorial service was held in Hale‘īwa last Sunday, March 8, where family and friends gathered to share their memories of Rogers. His ashes were spread across the coastline and a cohort of small planes flown by his close friends performed a special fly-by salute. One of the aircraft was the Bellanca CH 300 Pacemaker, which dropped 30,000 flowers from the sky in honor of the long-lasting impact Rogers left on our airline. 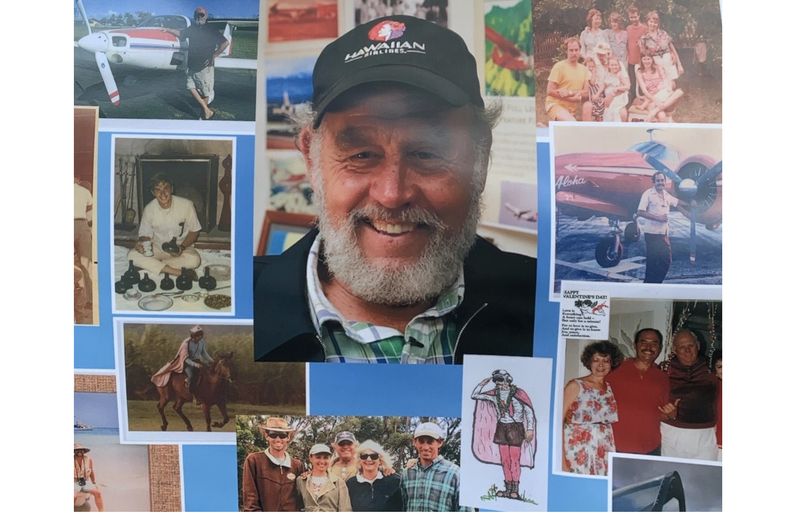 A collage the family put together for Rogers' service on O‘ahu’s North Shore.

Please join us in remembering the remarkable life of our archivist, colleague and friend Capt. Rick Rogers:

“Rick was a true aviation buff who loved and admired our industry. He will be deeply missed,” said Peter Ingram, our president and CEO, in a company memo to employees. “I send my aloha and heartfelt condolences to his wife, Lois, and his many friends here at Hawaiian Airlines.”

“Rick was a unique and wonderful person and pleasure to know,” said Ann Botticelli, our senior vice president of corporate communications and public affairs, the department where Rogers’ archival initiatives took shape. “He was a passionate protector of history, an aviation enthusiast, an author, and a marine archeologist. In short, he was a renaissance man and all of us were very lucky to have spent time with him.” 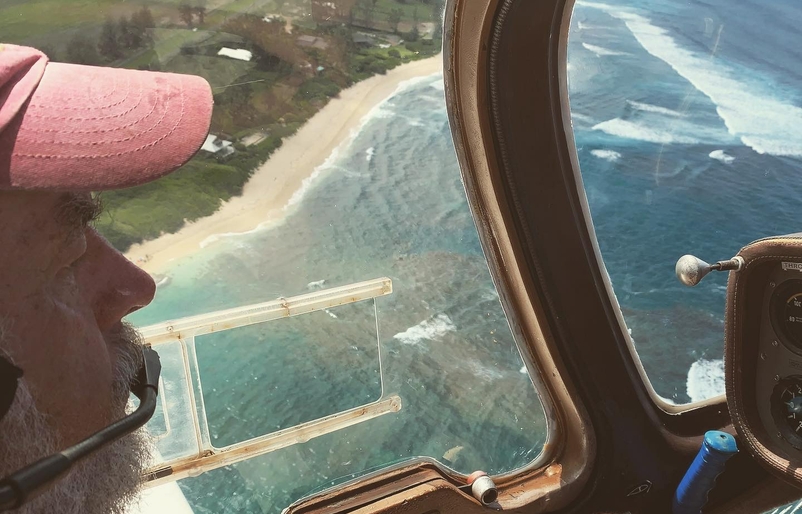 A fellow employee's picture of Rogers in his glider over the North Shore in 2019.

“I always looked forward to days when I was scheduled to fly with Rick. [He was] always technically proficient, but still had an upbeat attitude that made him a pleasure to spend the day with,” said Ken Rewick, our vice president of flight operations who once piloted our planes alongside Rogers. “We would fill the time between flights sharing stories about our early days flying in Hawai‘i and Rick’s research chronicling shipwrecks throughout the Islands. I’ll always remember him as an energetic, passionate and eternally youthful person. He will be missed, but not forgotten.”

“Rick was an original who added texture to life and whose enthusiasm always lifted spirits,” said Mark Dunkerley, our former president and CEO who spearheaded the re-acquisition and restoration of our Bellanca CH-300 Pacemaker – the project that started Rogers’ archivist career. 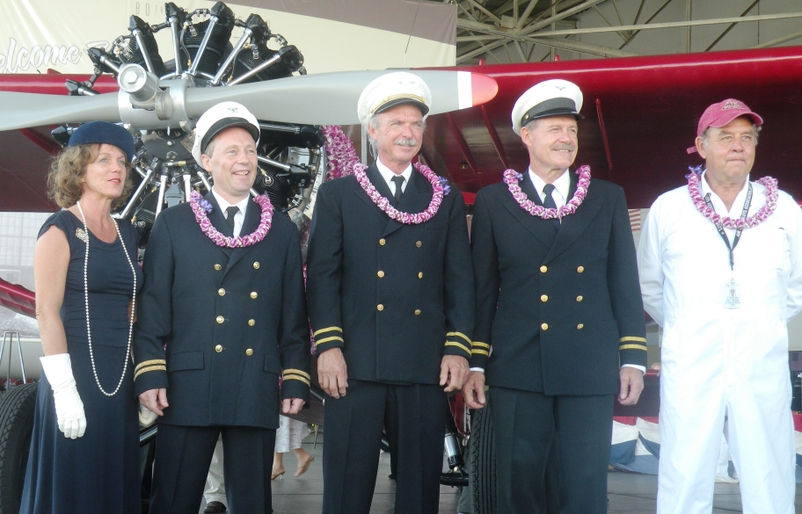 Rogers, pictured far right, during the unveiling of our Bellanca CH-300 Pacemaker after the completion of its first restoration in 2009.

“I was first acquainted with Rogers in 1978 when he was my flight instructor, and in 1987, we became classmates at Hawaiian Airlines,” said Kirk McBride, one of our Airbus A330 captains. “One of my favorite experiences with him was just last year when we flew an American Champion Citabria together. Godspeed, Rick Rogers. He will always hold a special place with me.”

“Capt. Rick was always generous with his time, knowledge, and enthusiasm,” said Julie Ng, a lead business functional analyst in our technical operations team who often donated her time to help Rogers in the archives. “During my time volunteering in the archives, we cataloged around 1,000 artifacts – and he had a background story for almost every item. Capt. Rick loved getting visitors to the archives and sharing the history of Hawaiian Airlines with others.” 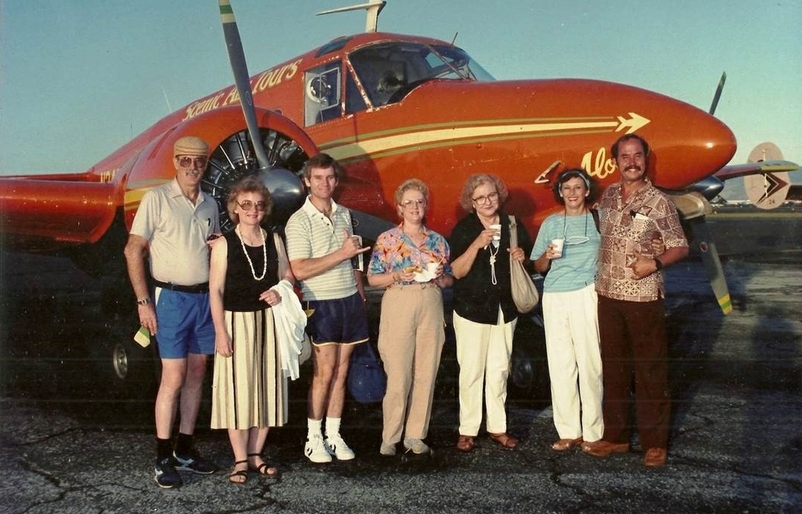 Rogers, pictured far right, when he was a pilot for a company called Scenic Air Tours.

“Rick and I flew air tours together in Twin Beech (Beechcraft Model 18) aircraft in the old days. His unique perspective to flying and all things historical made him one of the most exceptional pilots with whom I have shared the sky,” said Bruce Mayes, a longtime friend of Rogers who piloted one of the aircraft that flew over his service last weekend. “In my flying tribute over his celebration of life on Sunday, I honor a talented friend and outstanding pilot.”

Those wishing to offer support to the Rogers family are encouraged to direct their donations to The Ninety-Nines, an international organization of women aviators that is dedicated to the advancement of aviation through education, scholarships, and mutual support. To make a contribution in honor of Capt. Rick Rogers, please click here.