It’s day one of your trip to Hawai‘i, but before you can finally trade in your sneakers for slippers (flip flops), you have to first make your way through the airport and across the Pacific Ocean. Thankfully when you fly with Hawaiian Airlines, your vacation starts the moment you’re greeted by our airport staff and welcomed into our aircraft.

While you’re kicking back and enjoying our award-winning hospitality—including complimentary meals, movies, and Mai Tais—our ‘ohana is hard at work to get you to our islands while using the least amount of fuel possible. 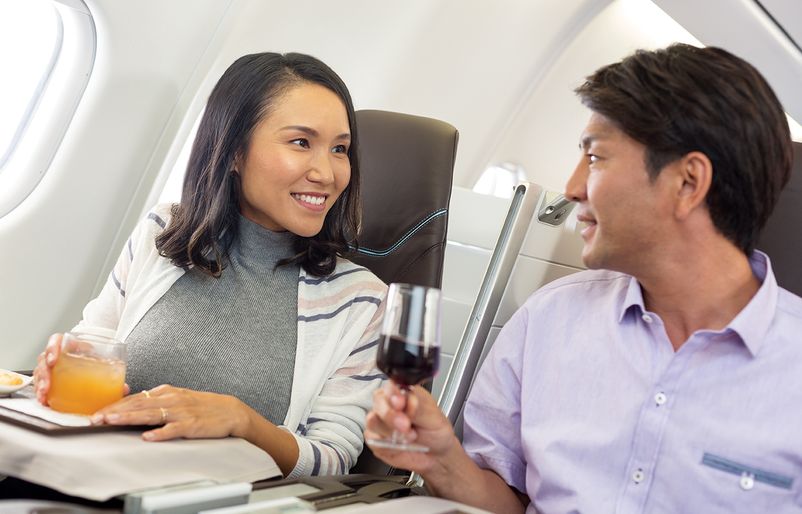 Why, you ask? It’s simple: The more fuel we save, the fewer emissions are released into the atmosphere, allowing us to reduce our carbon footprint, minimize our environmental impact, and make your dream trip to Hawai‘i even greener.

“Hawai‘i is our mission as a destination airline, but more importantly, it’s home to most of our employees. We have a big responsibility in protecting and preserving our islands’ natural resources and a part of that duty is making sure we are operating at a high level of fuel efficiency,” said Art Parra, senior manager of fuel efficiency at Hawaiian Airlines. 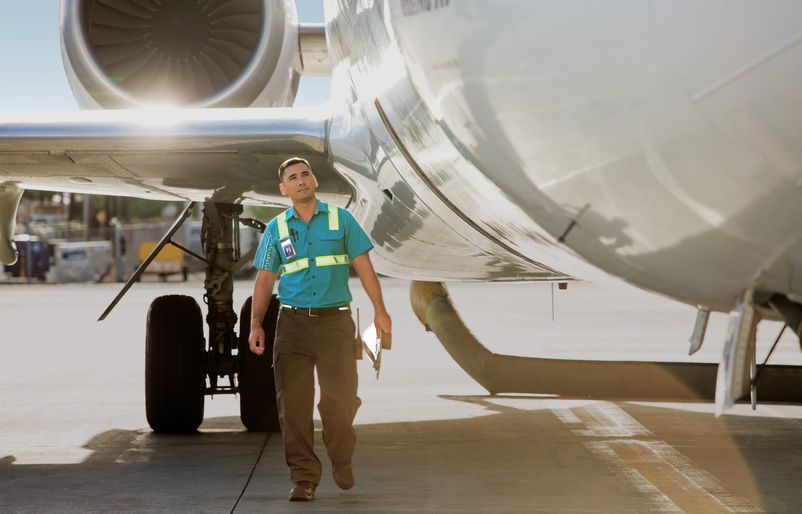 Fuel efficiency takes place at every stage of our guests’ travel experience, from waiting to take-off to the moment the aircraft’s wheels touch the runway. We are continuously analyzing our operations to identify opportunities to be more efficient—both on the ground and in the air. In 2018, we lowered annual jet fuel burn by seven million gallons[1]. This reduced our annual carbon output by 86,300 metric tons – the equivalent to removing 18,323 cars off the road for one year[2]. (How’s that for alleviating rush hour traffic?)

Have a trip on Hawaiian Airlines coming up? Join us as we walk you through some of the ways we are reducing our carbon footprint:

When you’re buckled up and ready for take-off…

We’re only using one engine to taxi the aircraft.

Did you know most twin-engine jet aircraft are able to taxi on one engine? When conditions allow, our Airbus A330 pilots leverage this functionality to reduce our fuel burn by taxiing the aircraft from the gate to the runway with one engine off. (HINT: If you listen carefully, you can even hear the second engine revving up right before take-off.)

The same is done upon arrival, with pilots shutting down one engine as they taxi from the runway to the gate. On average, 100 pounds of fuel per flight can be saved when using the single-engine taxi method with our A330[3]. 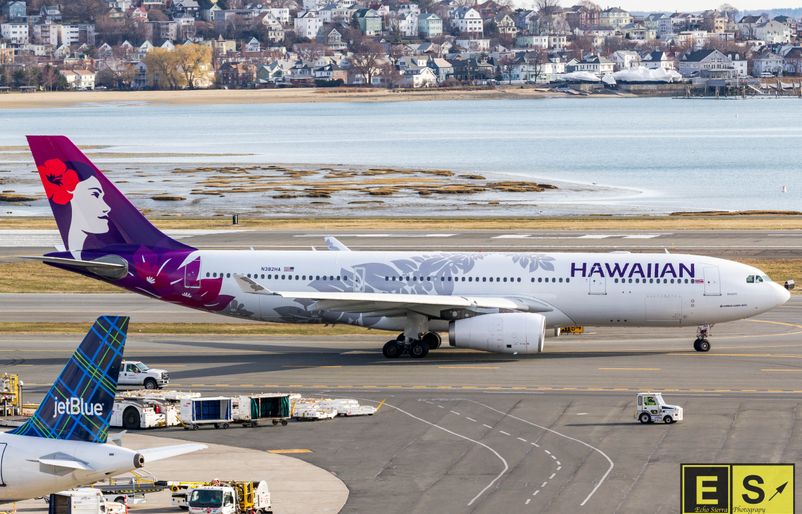 Our Airbus A330 taxiing out of Boston Logan International Airport during the launch of nonstop service between Boston and Honolulu. Photo credit: Eric Shito

If you’re flying on our A330, our pilots are using the Pacelab Flight Profile Optimizer (FPO) to chart the quickest and most comfortable route from take-off to landing.

Hawaiian earlier this year became the first U.S. carrier to adopt the technology, which augments flight plans done hours before departure by informing pilots throughout the flight about real-time aircraft data and meteorological information while recommending optimal altitudes to reduce fuel consumption. As soon as the aircraft lifts off and begins to climb, PACE will recommend the most efficient path to reach cruising altitude.

We’re using PACE throughout the flight to get you to Hawai‘i faster and with less fuel burn.

Pilots can reference satellite information, including wind projections, potential turbulence and a snapshot of the aircraft’s current performance via the tablet-based PACE system. We estimate this platform will reduce our annual fuel consumption by an additional one percent (approximately 1.3 million gallons of fuel) and prevent more than 12,000 pounds of carbon emissions – the equivalent to greenhouse gas emissions produced by driving 13,308 miles in an average car[4] – from entering the atmosphere.

“Having previously removed heavy paper manuals and charts, Hawaiian is further increasing the utility of our Electronic Flight Bag tablets by providing real-time decision support tools to allow pilots to optimize all phases of the flight. This means guests arrive on our islands well-rested and on time to begin their vacation, while we further reduce our environmental footprint,” Capt. Brian Beres, senior director of flight standards and qualifications at Hawaiian Airlines, said when we announced the introduction of PACE. 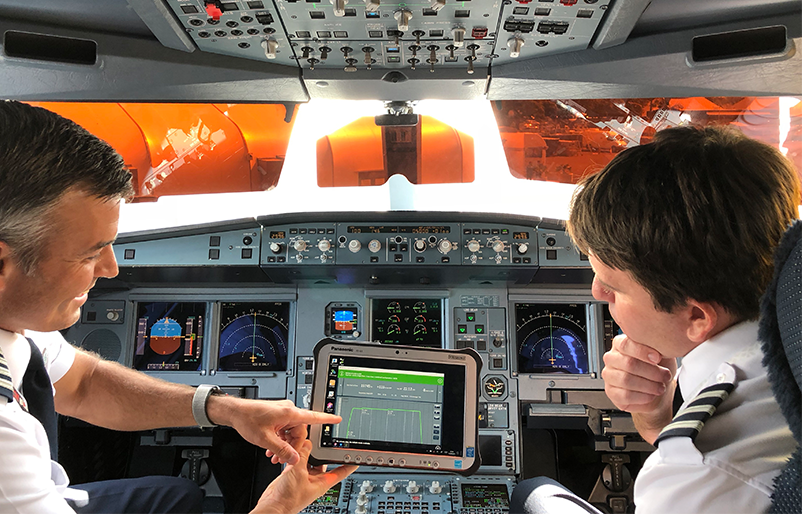 Hawaiian Airlines Capt. Brian Beres, left, holds a tablet featuring the Pacelab Flight Profile Optimizer dashboard while preparing for a departure in the cockpit of an Airbus A330 aircraft.

The system will soon also become a major component of a larger initiative called long-range air traffic flow management. PACE will be programmed to recommend course adjustments on a latitudinal plane and provide dynamic rerouting to keep our flights on schedule. Making these tweaks to the path allows us to decrease resistance against the elements (wind, bad weather, etc.) and get ahead of schedule enough that we can eventually slow our engines down. These enhanced route plans will keep us from burning more fuel than initially projected while maintaining our leading on-time performance.

We’re adjusting the aircraft’s flaps accordingly throughout the decent.

As we are preparing to land, our pilots utilize aircraft flaps – which can be seen out the window atop the wings – to achieve additional fuel savings. The technology is straightforward: as the flap moves closer to the body of the aircraft, it reduces drag and fuel burn.

We’re letting gravity and the aerodynamics of our aircraft do the work.

We’re also working on implementing continuous decent arrival, a technique pilots use to glide on their flight path toward the airport while using minimal engine thrust. It allows our pilots to reduce fuel use by an estimated 200 pounds per arrival, compared to what is traditionally required in an aircraft decent.

We’re shifting gears and using basic principles of physics to slow down.

When moving the aircraft to the gate, our pilots are doing two things: using single-engine taxiing and shifting the throttle to idle reverse thrust. Putting the engines on idle followed by reverse thrust slows down the aircraft without frequent brake application. 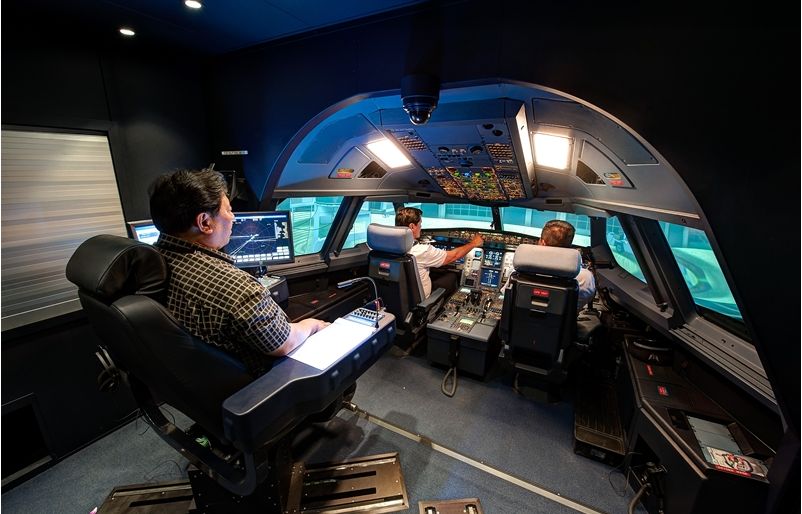 Our pilots have the opportunity to train for fuel-efficient landing techniques using our A330 simulator, located at our Honolulu-based headquarters.

We’re looking for the best runway exit to take.

Upon landing, our pilots are working to identify the best (of several) runway exits. The distance from the selected exit to our aircraft’s assigned gate determines the fuel-efficiency procedures we put in place. For example, we’ll adjust our flaps to the highest setting to slow down, use idle reverse thrust and taxi to the gate with one engine.

As the plane makes its way to the gate, we also rely on our airport operations team and ensure they have the resources they need to receive the aircraft immediately upon arrival. By being prepared, we can efficiently orchestrate the deplaning of hundreds of passengers, their bags and cargo, and avoid spending energy waiting.

Our modern fleet and state-of-the-art dispatching programs allow us to optimize all phases of flying, leading to reduced carbon emissions before, during and after each flight. Our multibillion-dollar investment in a new narrow-body Airbus A321 fleet, the most fuel-efficient aircraft of its type, has led to 16 percent lower fuel burn per trip, compared with previous generation aircraft. 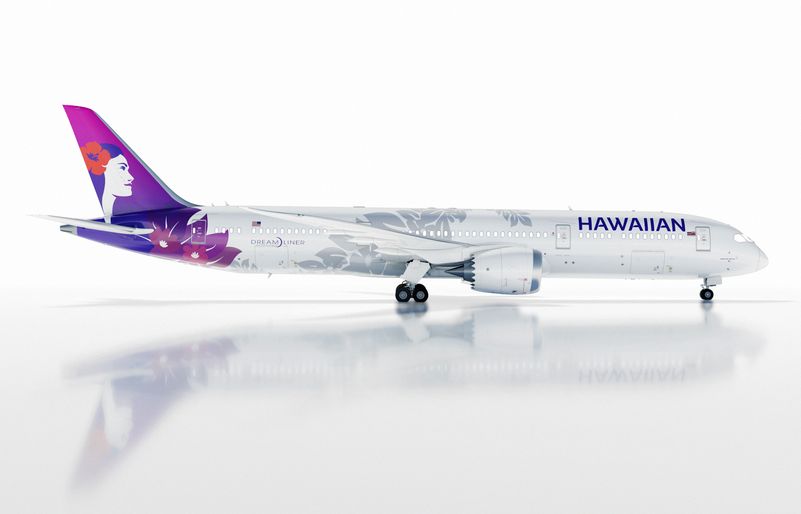 To run an aircraft, you need a good, clean engine. In 2012, Hawaiian became the first carrier to earn aviation-based carbon credits thanks to our use of an environmentally friendly engine-washing system that significantly curbs carbon emissions.

Our journey towards becoming more fuel-efficient never ends, and we are steadfast in our commitment to fly smarter and become an eco-friendlier carrier.

“We are far from perfect, but it’s exciting and rewarding to know we are significantly reducing our environmental footprint by continuing to invest in advanced technology and perfecting our processes on every flight,” added Parra.

To learn more about our corporate responsibility, including the other ways we are working to protect and preserve the beauty of our Islands, click here.

[1] This number is compared to an operational baseline without fuel efficiency initiatives in place.

[3] This method is only applicable to the Airbus A330. Our flight operations teams are currently working on applying the process to the Airbus A321neo, which uses special fuel-efficient engines and requires more advanced training and application techniques.