When flight HA576 from Honolulu to Maui landed at Kahului Airport in October 2018, its pilots weren’t expecting to be greeted by a new fan. But one guest, Victoria Thom, an 11-year-old aspiring pilot, was thrilled to see her flight was operated by two women and jumped at the opportunity to introduce herself. Our Boeing 717 Capt. Carrie Hironaka and First Officer Kanani Aio welcomed Thom with open arms, taking photos with her and inviting her into the cockpit before their next flight back to Honolulu’s Daniel K. Inouye International Airport (HNL).

When Thom returned to her home in Arizona, she sent us a letter thanking the pilots for their experience:

“This flight crew was very inspirational to me because I want to be a pilot as well. It was very exciting to discover that both the Captain and First Officer were women. My dad is a pilot at JetBlue Airways, and I have wanted to fly just like him since I was two years old. After my experience flying on Hawaiian, I have decided to become a pilot at Hawaiian Airlines when I grow up,” Thom said.

“After I graduate, I will be applying to Hawaiian Airlines. I plan to interview with you in about fifteen years, so I hope you will be watching for my application. I hope to do as well as the pilots that were on our flight to Maui! Please let them know that they have truly inspired me!”

Our pilots responded to Thom with their encouragement – reflecting our airline’s dedication to molding the next generation of aviation professionals: 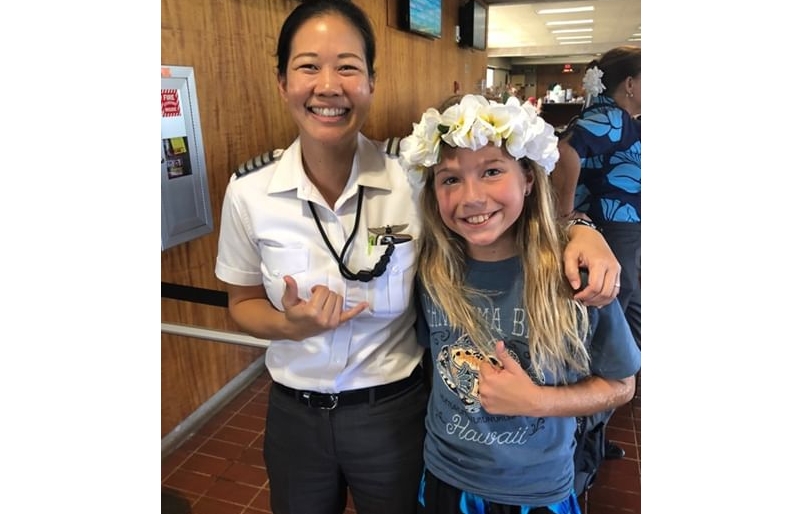 Hironaka and Thom in October 2018

“I love seeing youth who are passionate about aviation – and love it, even more, when it is a young female. You seem very dedicated to your goals and with the support of your family, I have no doubt you will one day be my First Officer at Hawaiian Airlines, maybe in even less than the fifteen years that you’re giving yourself,” Hironaka said in her letter. “There is nothing like the feeling of rolling down that runway and taking off up into the sky, so study hard but remember to enjoy the ride!” 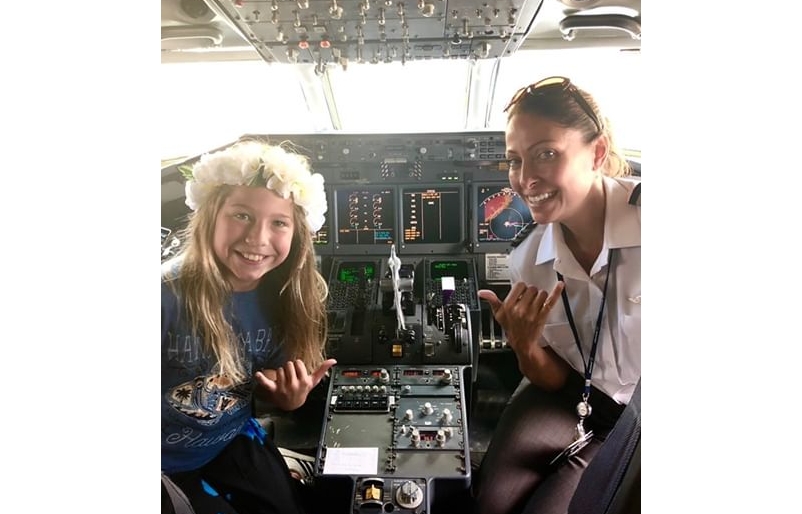 “I’m so happy to hear that you’ve decided to become a pilot and that you’ve set your heart on Hawaiian Airlines! It’s an incredible place to fly and flying between the islands is pretty special. There’s no place like it in the world,” Aio said in her response. “You’re at the beginning of an amazing journey and I’m so excited for you! It’s not always easy but it so much fun and completely worth it. Don’t ever give up and you’ll get those wings!”

So, when we discovered the Thom family would be taking another trip on Hawaiian Airlines, we knew we had to make it special.

Just in time for International Women’s Day, our ‘ohana came together to give Thom the ultimate surprise: a chance to get a head start on her career as a Hawaiian Airlines pilot. 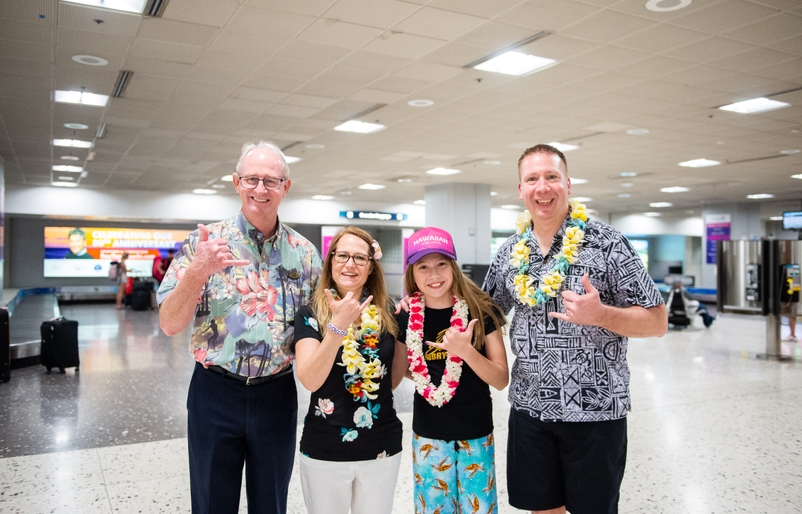 Clark (far left) pictured with the Thom family at HNL

When the family arrived at HNL, they were greeted by Hawaiian Airlines System Chief Pilot Peter Clark. In his hands were two special gifts: a pair of Thom’s very own Hawaiian Airlines wings and a captain’s logbook to document her pilot meet-and-greets in the years to come. 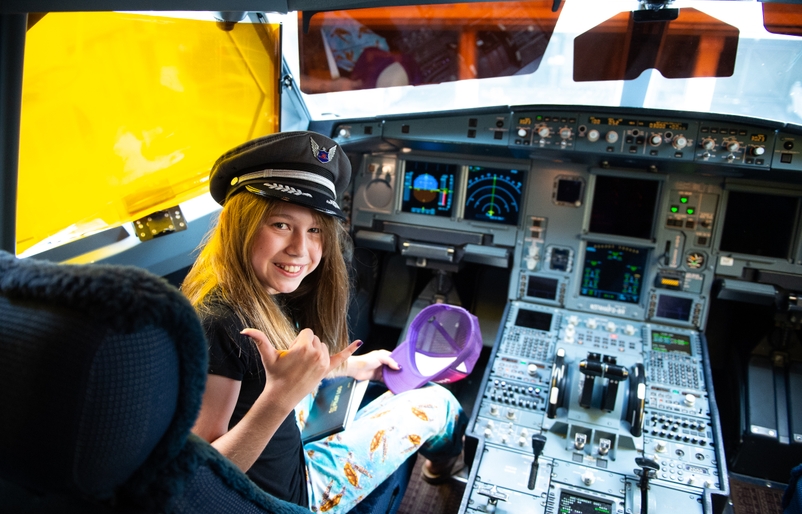 Thom in the cockpit of the Airbus A330

“I’m excited about today because I started when I was 15 years old. Tori is 11, so she’s even younger than I was," Clark said before the surprise. "For some people flying is a passion that is going to carry them all the way into retirement and I suspect Tori will be one of those, so I’m happy to light that fire.” 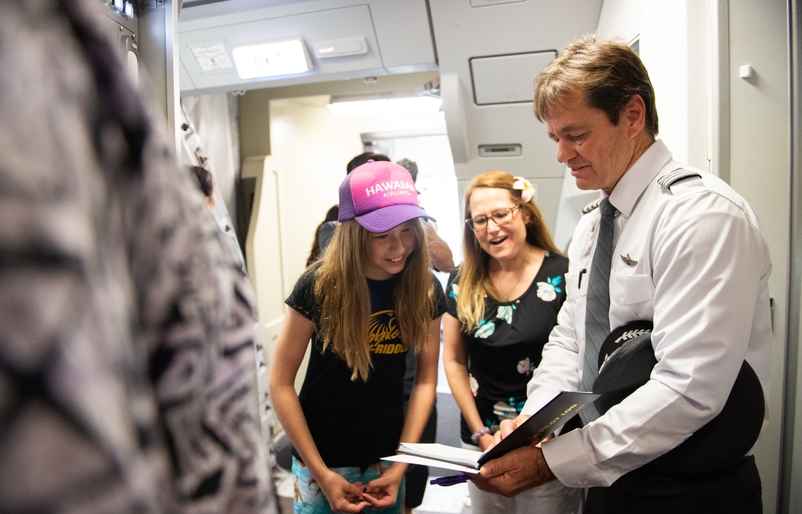 The captain of the Airbus A330 filling out Thom's first logbook

Thom broke in her logbook with her first pilot signatures from the captain of her flight to HNL and given her first pair of Hawaiian Airlines wings to pin on her shirt. Clark then took Thom on a walk in a pilot’s shoes, giving her a behind-the-scenes look at pre-flight preparations at our HNL crew center. 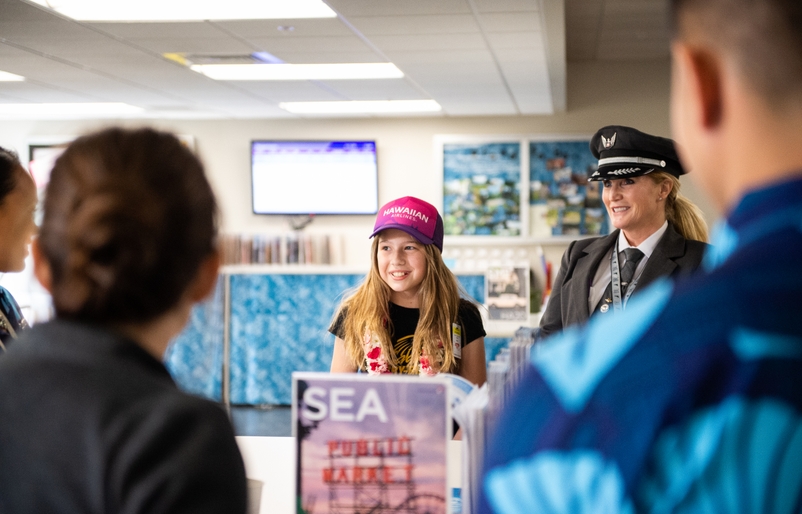 There, she was able to sit in on a flight crew briefing, meet pilots preparing for their flights and see what it takes to finalize a flight plan with our Systems Operations Control Center.

Afterward, we headed to our nearby headquarters, gave her a tour of our pilot training facility, and buckled her into the co-pilot’s seat of an Airbus A321neo simulator, giving her the wheel to fly the aircraft around Diamond Head and over urban Honolulu. 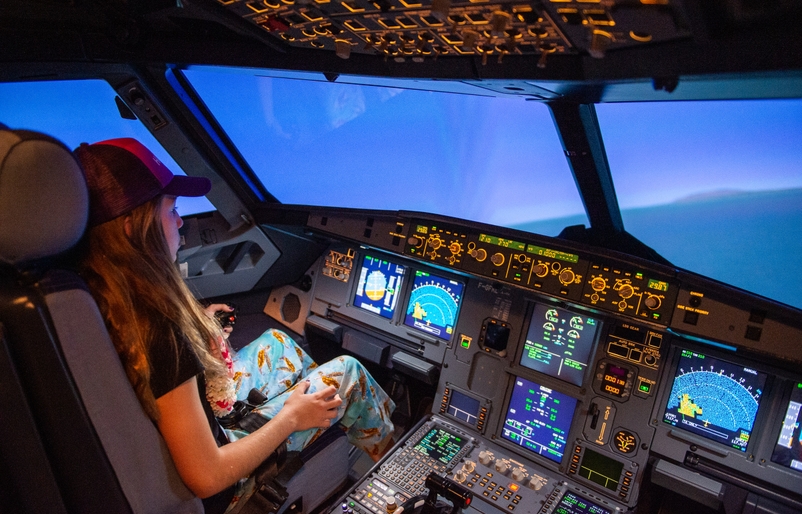 Thom in the captain's chair of our Airbus A321neo simulator

Before the Thom family left us to embark on their vacation, we ended their pilot adventure with a personal look at our very first airplane - the 1929 Bellanca CH-300 Pacemaker 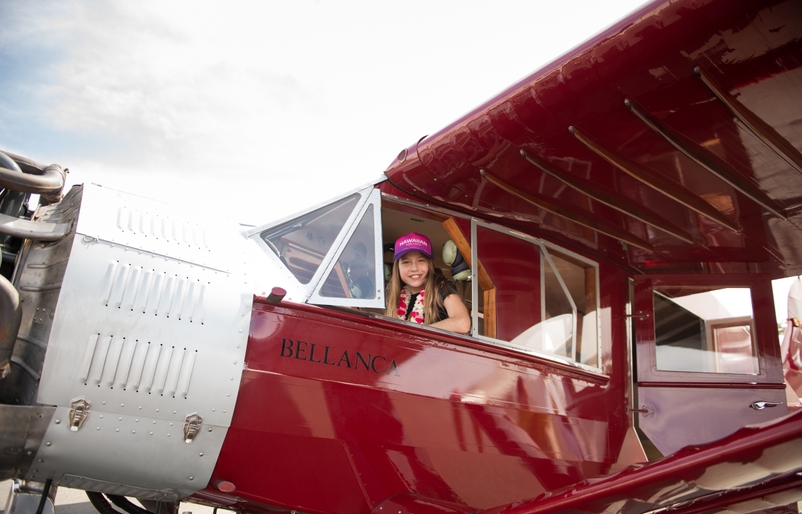 The cherry on the cake, Thom took the captain's seat in our first plane ever put into service.

“Since the first time I ever came to Hawai‘i, I was like this is where I want to fly,” said Thom. “[Hawaiian Airlines] is the best airline I’ve ever flown on.”

Our airline is proud to have one of the highest percentages of female pilots in the industry, making up nearly 10 percent of our entire pilot workforce. We strive to continue that momentum, fostering workplace diversity and creating skills-based learning opportunities tailored to educating and growing the next generation of aviation professionals.

Join us in celebrating our future pilot Victoria Thom and the next generation of aviation leaders.

For images from Thom's surprise, check out the slideshow below. To enlarge the photos, click the images. 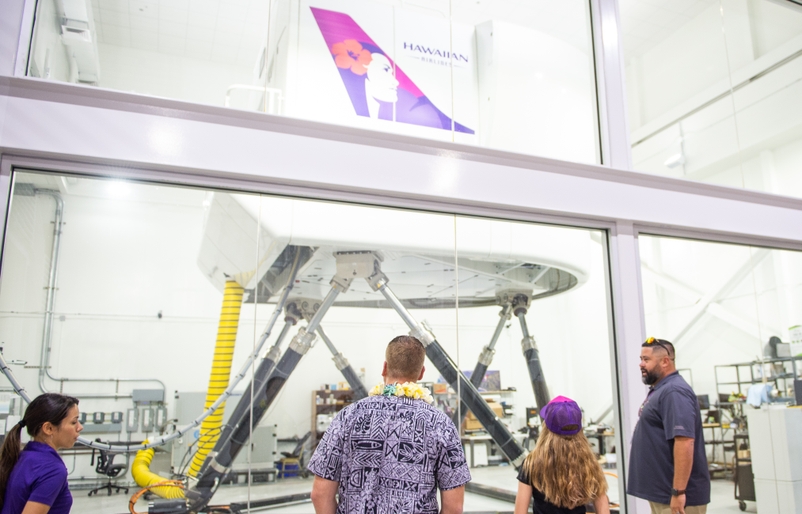 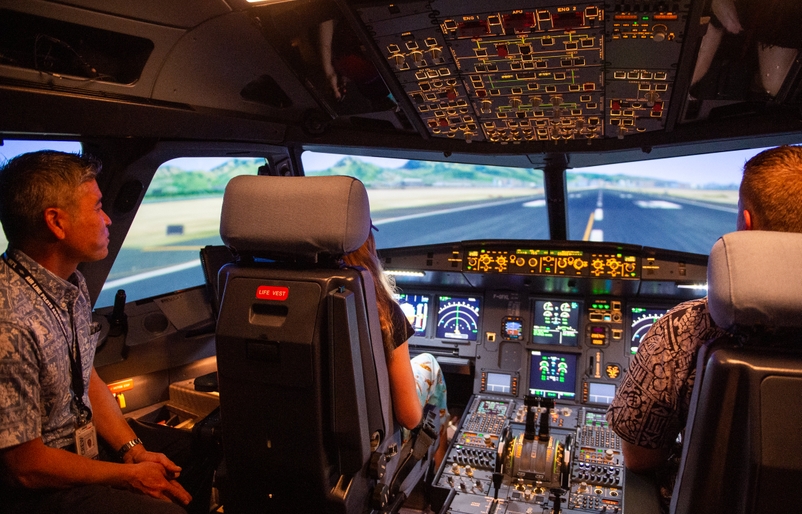 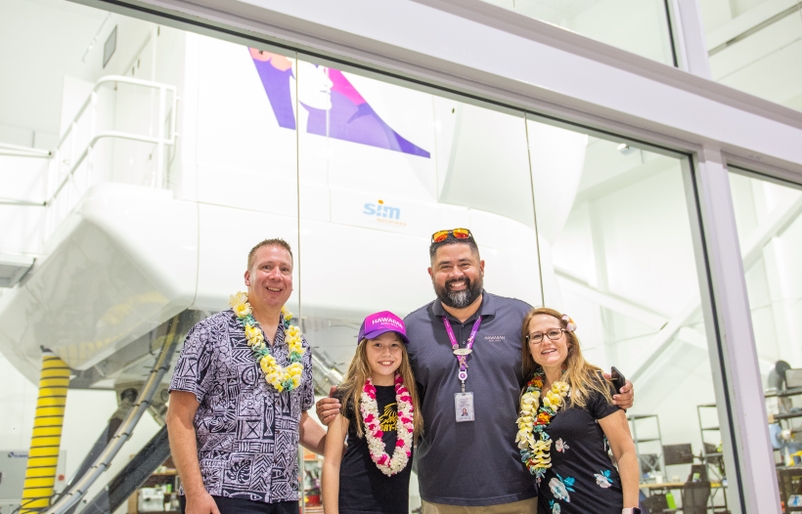 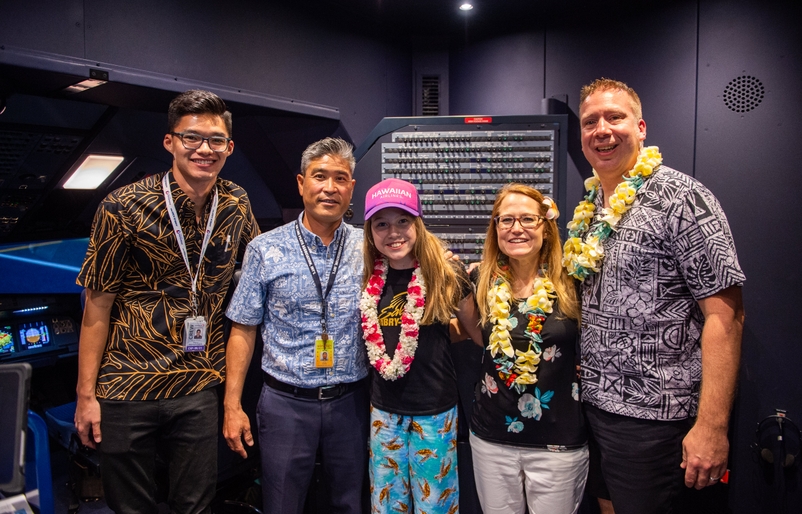 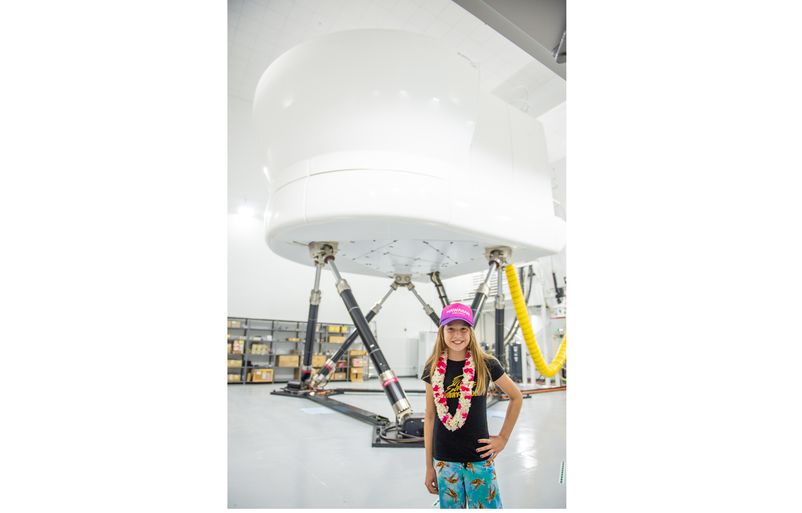 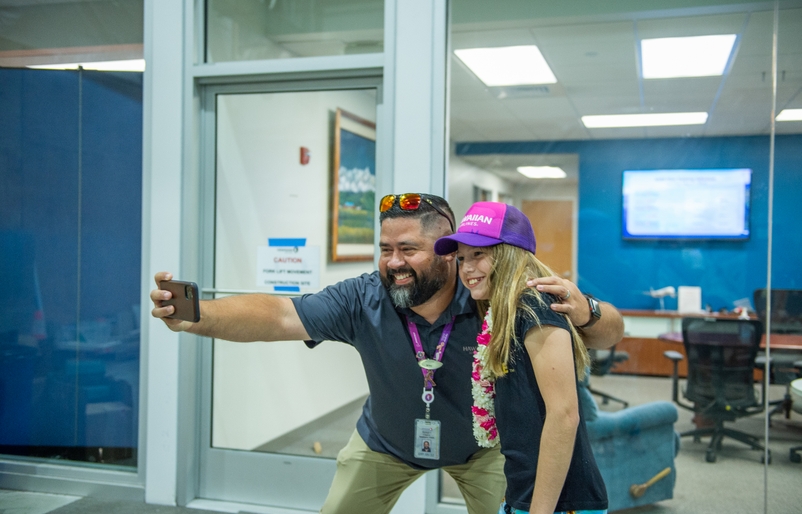