Hawaiʻi residents can spot their friends, neighbors and family members in a new commercial, airing statewide and on our digital channels, that showcases 22 Hawaiian Airlines employees and their extended ‘ohana going about their day in and out of work – all while humming and singing along to John Cruz’s iconic song, “Island Style.”

Jeremy Althof, Hawaiian’s director of global advertising, said his team was deliberate about telling a story that would resonate with the people of Hawaiʻi.

“In the preliminary phase of this campaign, we went to the community for their feedback, and one thing we asked was, ‘What makes Hawaiian Airlines different from the rest?’ Over and over again, people told us it’s our employees and the interactions they’ve had with them,” he said. “Our people are of this place; they’re the only ones who can deliver that authentic, memorable Hawaiʻi experience, so honoring them the right way was important to us.” 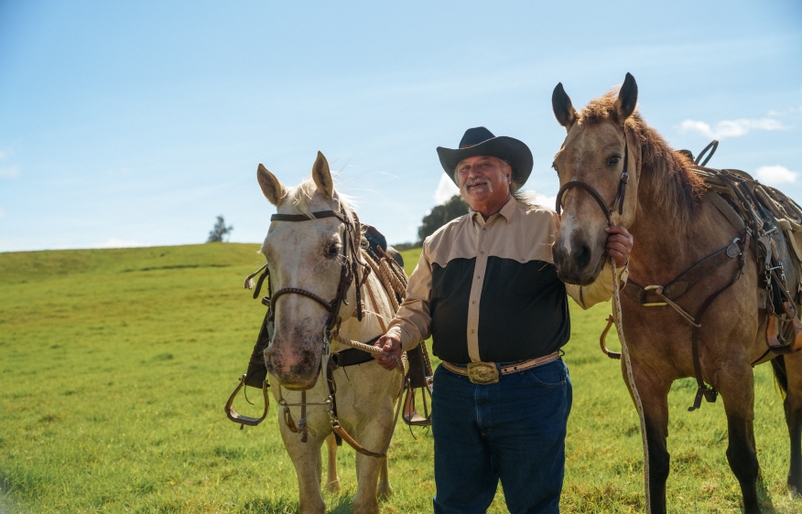 Equally important, Althof explained, was finding the right song. The spot marks the first time Cruz, a Nā Hōkū Hanohano award-winning singer, has licensed the beloved song for a commercial.

“We wanted to make an emotional statement about our relationship to Hawaiʻi and our commitment to this place through visual storytelling. And we wanted to do it in a way only Hawaiian could – and working with John Cruz really helped make everything feel right and not forced,” he added. 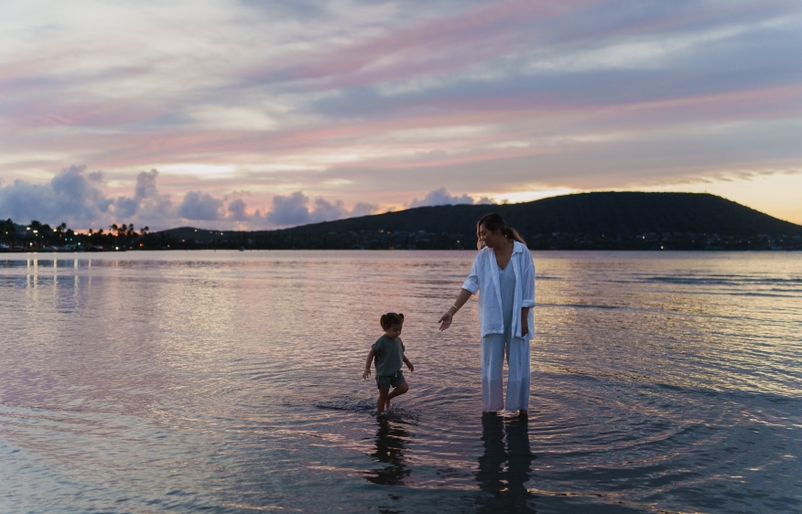 Mother and Hawaiian Airlines Flight Attendant Kamyl A. walking her daughter through the shallow waters of Maunalua Bay on O‘ahu.

Alisa Onishi, senior director of brand and community at Hawaiian, often refers to Cruz as part of the ʻohana.

“Hawaiian Airlines has a strong relationship with many Hawaiʻi musicians, and John Cruz is definitely one who is near and dear to us,” she said “Working with him to produce a custom version of his song brought the vision together by creating a sort of anthem for our employees. You hear ‘Island Style’ once and it’s stuck in your head all day, and the song is so cherished locally because of its way of sharing the subtle nuances of our way of life here in Hawaiʻi.”

In a sit-down interview, Cruz reflected on why he chose to work with Hawaiian Airlines for the commercial.

“People remember the first time they heard [Island Style] – which is really the first time they felt it. I don’t want people listening to my music, I want them to feel how they feel. People still want to feel…connected to something. When I read the brief [for the Island Style campaign], it was perfect. I felt like it would honor the song, and I felt, even from the beginning, that a lot of people were invested in this because of the way it felt,” he said. 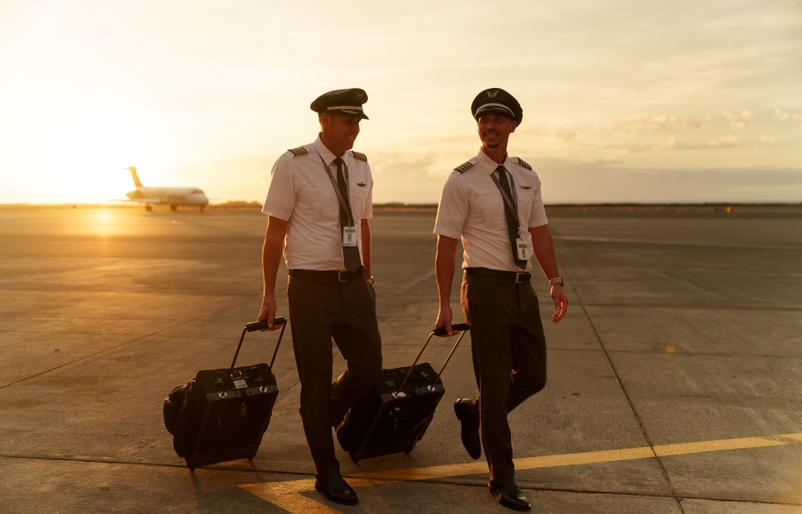 Brothers and Hawaiian Airlines Airbus A330 Pilots Matthew K. and Jacob K. walking during sunset on the tarmac of Kona International Airport on the Island of Hawaiʻi.

Employees cast for the campaign ranged from flight attendants and a family of pilots to teammates in our headquarters and airport operations. Each was given the opportunity to suggest activities and locations that meant the most to them. Featured scenes spanned across the islands and include gathering for beers at Maui Brewing Company in Kihei, Maui, making lei at The Pua Bar at Kilohana Plantation, Kauaʻi, riding horses at a family ranch in Kohala, Island of Hawaiʻi, performing hula in the backyard of a family hale (house) on Windward Oʻahu, and attending an afterschool baseball practice at Oahu’s Kīlauea Community Park – home of the 2022 Little League World Series champions.

During the production phase, Lauren Mabuni, Hawaiian’s global advertising strategy manager, said employees were encouraged to do what they always did, carrying on as if the cameras weren’t there.

“When we were filming, we tried to put the scene into their context as much as possible. We’d say, ‘take us to your favorite fishing spot!’ or ‘Load the baggage like we aren’t here!’ It was really following them around their daily lives on and off duty,” she said. 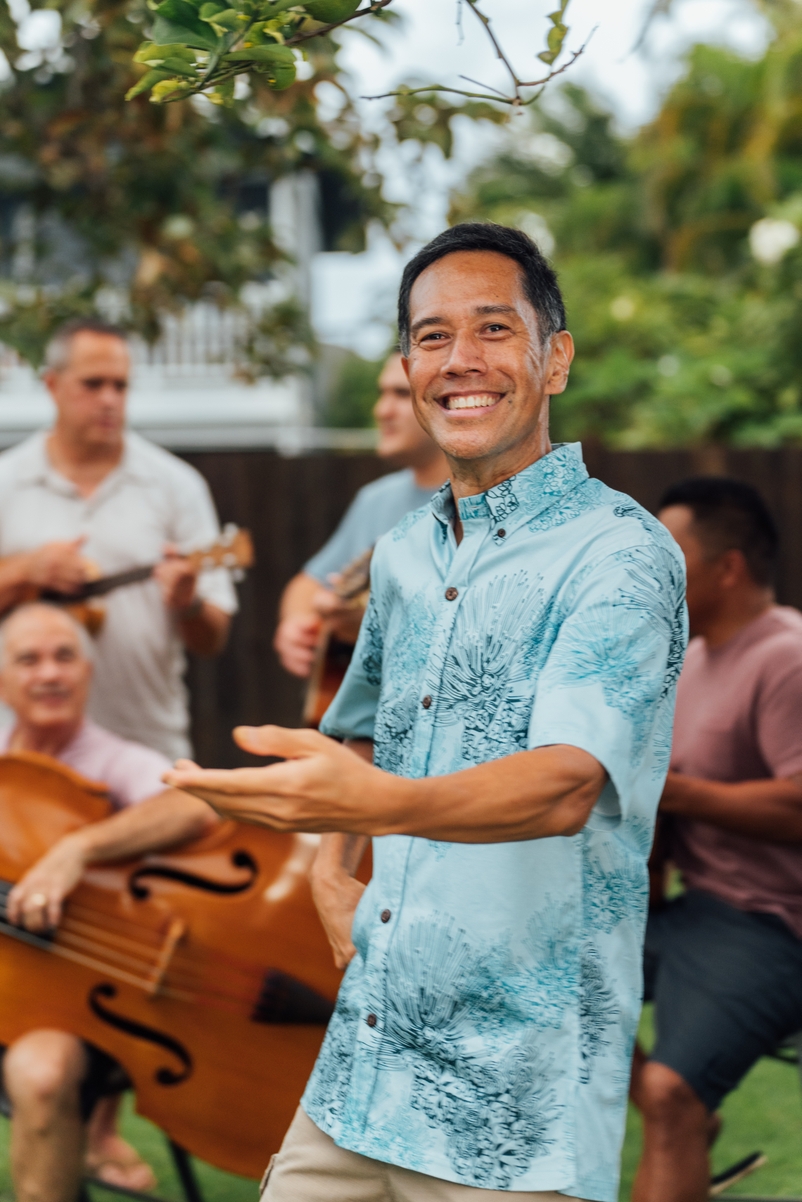 Onishi added, “I think what I love most about this ad is that we don’t label the people and places we show, but if you know, you know. For example, we don’t explicitly say that the baseball team shown is the Little League World Series Champion team, but if you live in Hawaiʻi, you know.

“This is our home, these are our extended family members, and we’re all a part of this amazing community.”