Nestled at the heart of O‘ahu’s iconic North Shore is a place of legends. Waimea Bay, a beach frequented in the summer by sun-seeking visitors and locals, is home to the world’s premier monster waves. A sleeping giant, Waimea awakens during the island’s winter season as massive, deep-water swells attract top big-wave surfers from around the globe on the hunt for their next great ride. 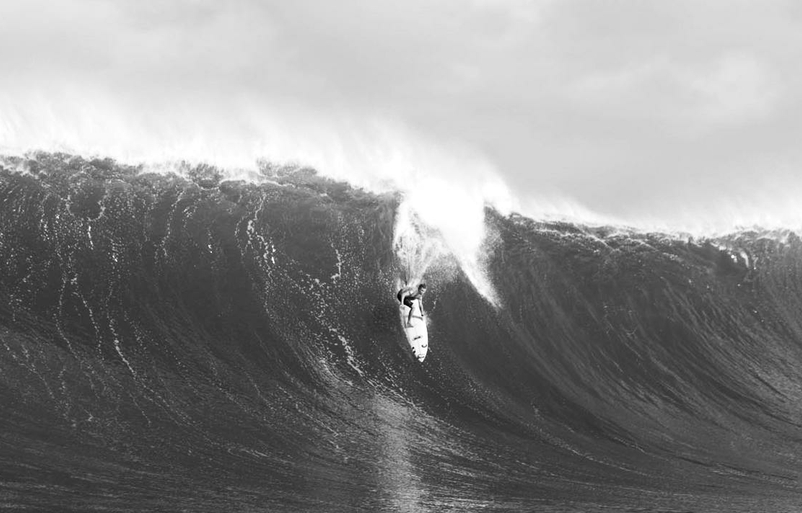 The surfing industry keeps a close eye on the Bay every winter. The hope is that conditions read just right to give the green light for the 34th annual Eddie Aikau Big Wave Invitational. Widely recognized as the world’s most prestigious surf contest, the event honors the legacy of Waimea Bay’s first lifeguard and big-wave pioneer, the late Eddie Aikau. The Aikau family hand selects a group of elite contestants who remain on standby during the contest window from Dec. 1 through Feb. 29. 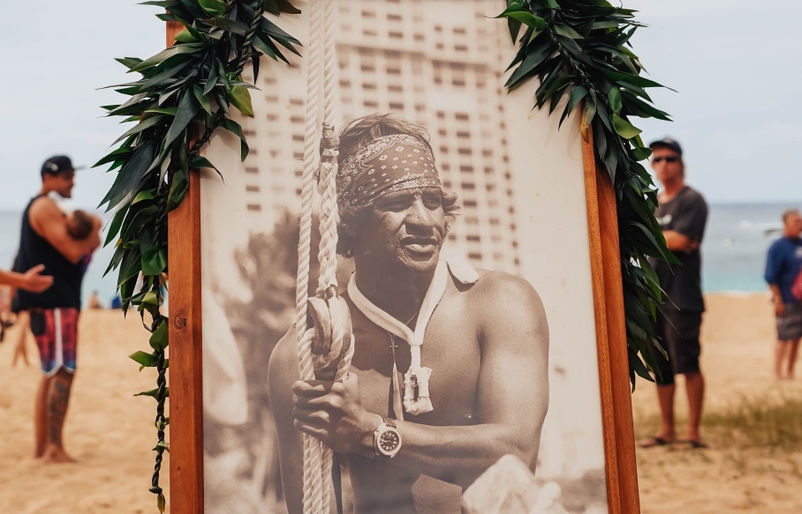 A photo of Eddie Aikau draped in lei at the opening ceremony.

With strict swell requirements, the event has only been called nine times in its three-plus-decade history. “We’re looking for 20 feet, 20 seconds,” contest director Liam McNamara said during his remarks at this year’s opening ceremony.

To translate, that means the swell must have at least 20-foot Hawaiian waves (40-feet at the face of the wave) peaking every 20 seconds during a set. Long-period swells are stronger and more organized, which matters for the Eddie since it requires the surf to be both large and clean – not windy, mushy or blown out. Safety professionals, including McNamara, must deem conditions safe enough for even the best waterman of our time.

Until that perfect day, the Aikau family uses the holding period as an opportunity to gather and perpetuate Eddie’s legacy as a respected and inspiring waterman, Polynesian Voyaging Society crewmember and big-wave surfer. 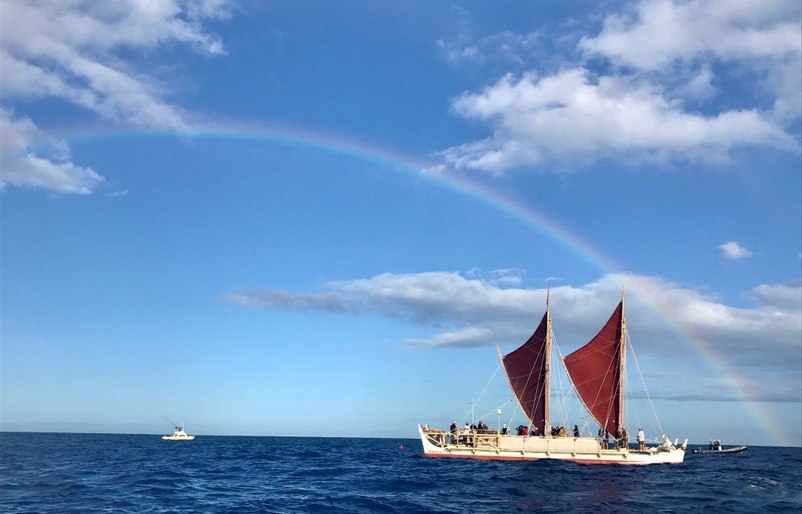 Hōkūleʻa just outside of Diamond Head upon its historical homecoming in 2017.

Eddie’s life was rooted in Waimea Bay, where he was responsible for more than 500 rescues and never lost a life. In 1978, he went missing at sea while trying to save fellow Hōkūle‘a crewmembers when the traditional Polynesian voyaging canoe capsized during a heavy storm several miles south of Moloka‘i soon after they had begun sailing to Tahiti. In June 2017, the same double-hulled canoe would complete the four-year Hawaiian Airlines Mālama Honua Worldwide Voyage to promote sustainability around the world.

Today, Eddie Aikau reigns as a symbol of heroism, bravery, wisdom and passion. 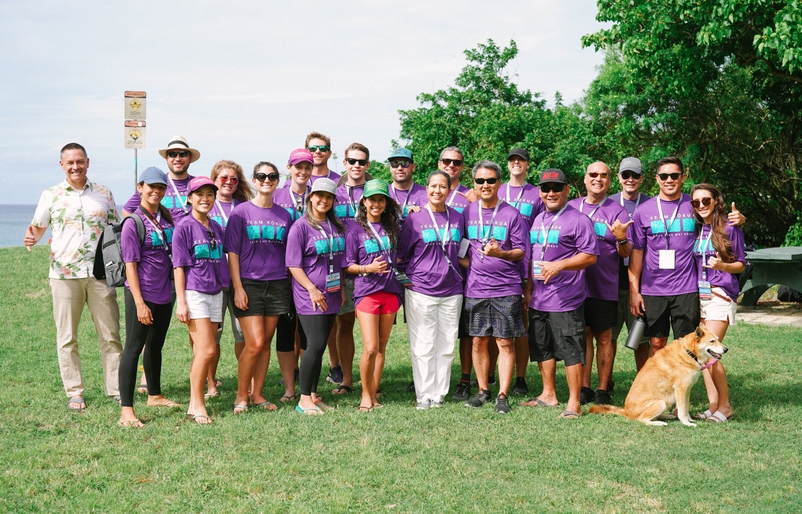 Hawaiian Airlines volunteers spent the day at Waimea Bay to honor the legacy of Hawai‘i's most celebrated waterman.

In honoring Hawai‘i’s most celebrated waterman and surfing’s historical ties to the islands, Hawaiian Airlines has joined the invitational as a major sponsor. To kick off our support, Team Kōkua, our employee volunteer group, gathered at the Bay on Dec. 5 to help set up the event’s opening ceremony.

“Supporting the Eddie Aikau Big Wave Invitational is important to a lot of our employees, many of whom spend a good portion of their lives outside of work in the water,” said Jennifer Lee, manager of marketing promotions at Hawaiian Airlines. “Surfing, like many water sports, is a rich element of our community and culture, and we are honored to join the Aikaus in helping bring this momentous event to life.”

Up Close and Personal with the Aikau Legacy

As a fellow surfer and a water lover, I jumped at the opportunity to join Team Kōkua at Waimea Bay, where hundreds of attendees gathered along the shoreline to give their respect and ring in the holding period.

The morning was rich with cultural celebration as youth from throughout the state traveled to the Bay to give their blessings, bringing people together through familiar songs, chants and hula. 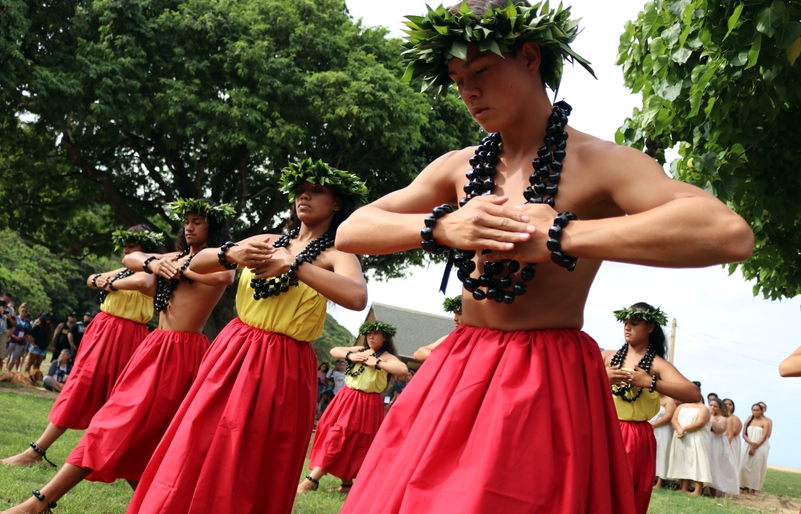 Hālau Hula from throughout the state traveled to give their respects to the Aikau family and celebrate Eddie Aikau's legacy.

The ceremony broke into a recess before this year’s invited surfers were introduced. The once tight-knit circle scattered to eat food, jump in the ocean or reconvene with family, and I, who’d just spent the first hours of the day running around with a camera, sat down for lunch under a tent. After I finished my food, I found myself in the presence of Clyde Aikau, Eddie’s brother and a 1986 contest winner who’d come over to our quiet area for a moment of rest.

Slightly starstruck, I realized this was quite possibly my first and only chance to talk story with the big-wave legend. So, with all nerves aside, I started a conversation with my tablemate and listened patiently as he talked about his work, memories of surfing Waimea, and the immense respect he held for his brother. 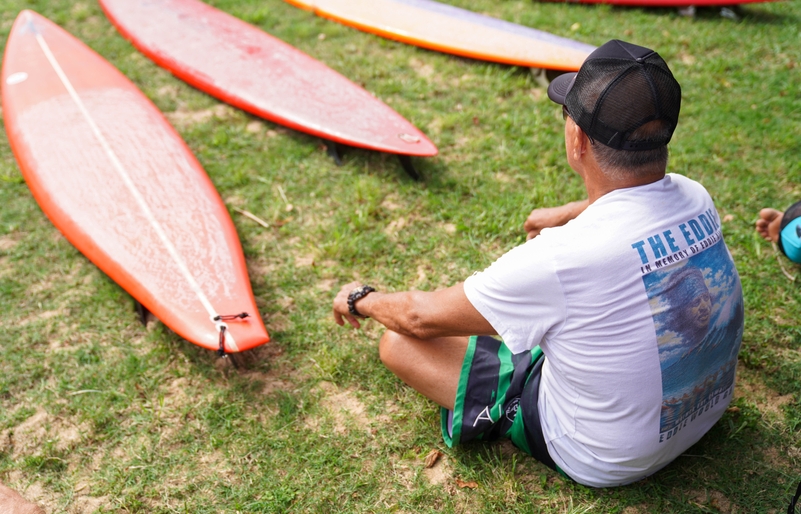 Clyde Aikau during the ʻawa ceremony.

I learned a lot about Clyde, but the biggest takeaway: the youngest Aikau sibling has an ever-growing love for his community, a trait he so humbly shares with his brother. He continues Eddie’s legacy by doing whatever he can to help others in need and doing all things, including surfing, with heart and soul. It was clear the invitational was more than a premier surfing event to the Aikau family; it’s a way to keep Eddie Aikau alive by sharing his story.

Before parting ways, I asked how he felt about that day. He took a moment to gather himself, gently clasped his hands on the table, and said, “There will always be someone that is going to catch a bigger wave, a bigger barrel, but for the Aikau family, Eddie’s legacy is long-lasting. This contest embellishes what he believed while he was alive: helping others and carrying your passion into riding big waves.” 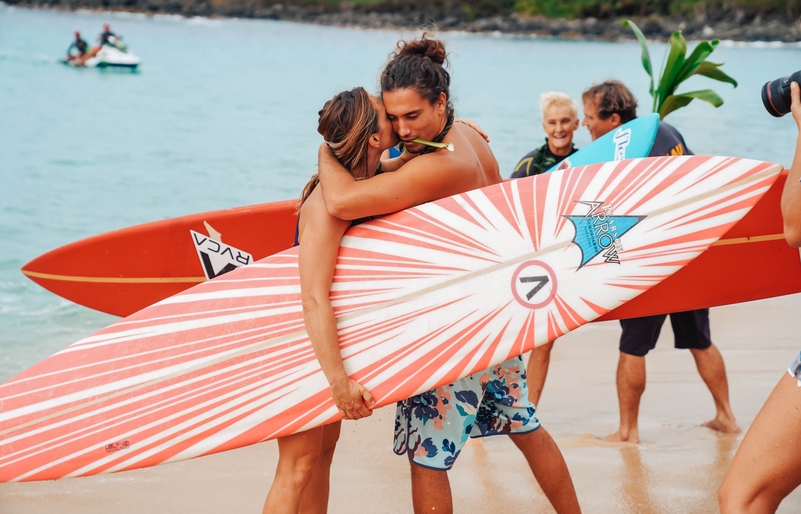 The Eddie Aikau Big Wave Invitational invitees embrace one another on the shoreline of a calm Waimea Bay prior to a group paddle-out ceremony.

I returned to my desk at our Honolulu headquarters the next day and pondered over my conversation with Clyde, wondering what the Eddie Aikau Big Wave Invitational meant to me.

To be honest, I’d never really thought about it so deeply before, but I later came to see it as a representation of resiliency, learning from beyond your comfort zone, and stepping outside of yourself to become something greater. With our 90-year-old Hawai‘i roots, it's a natural fit for Hawaiian to support such a phenomenal event and a sport that many of us are so passionate about. 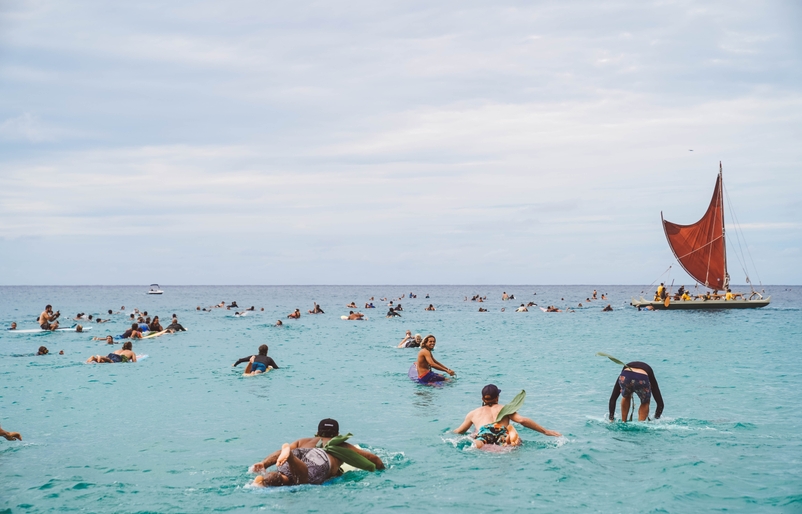 Big-wave invitees and their families and friends paddling out alongside a North Shore community waʻa (traditional sailing canoe) with ti leaf in hand. Each year, the invitational holds a blessing in the Bay in honor of Eddie Aikau and to ring in the holding period.

Curious to hear what my co-workers thought, I caught up with other Team Kōkua volunteers from the opening ceremony and asked why Hawaiian Airlines sponsoring the Eddie is important to them. Here are their reflections:

Elizabeth Loomis, senior manager of corporate real estate: “One of the greatest aspects of working for Hawaiian Airlines is its ongoing commitment to the local community. It is important to me as an employee to work as a part of an organization that steps in and sponsors events and causes that are meaningful to the community and the history of Hawai‘i such as the Eddie Aikau opening/invitational. I was humbled to be present at the opening ceremony and was happy to be able to help at the event.”

Debbie Nakanelua-Richards, director of community and cultural relations: “Hawai‘i is the birthplace of surfing and is intrinsically tied to the people, history and culture of this place. The name Eddie Aikau is legendary in this world-renowned sport for his accomplishments as a waterman. I am extremely proud that Hawaiian Airlines is part of this community that continues to recognize his contribution to the world of surfing. Although Eddie has passed, his spirit lives on.”

Lee Yabusaki, senior executive assistance of marketing e-commerce: “It was a privilege for me to be involved in this event. I am a relatively new resident to O‘ahu – though I do have family roots here – and take every chance I can get to learn about the culture and history of Hawai‘i. While I am not a surfer (I’m more of a beach lover), it was such a great opportunity for me to experience the legacy Eddie Aikau left behind.”

Alex Da Silva, director of external communications: “As a resident of Pūpūkea (just above Waimea Valley), the Bay is a special place for our family. As a surfer, it’s thrilling to hear the roar of the waves when a swell is building overnight. I admire Eddie’s bravery and am thankful for his immeasurable contributions to ocean safety and the lifeguards who patrol the Bay today.”