What does it take to turn an ordinary office building into an energy-efficient workspace? For Carbon Lighthouse, a clean energy company with a mission to stop climate change, it starts with an ordinary sensor that fits on the palm of your hand.

Our partnership with Carbon Lighthouse began in March 2019 when we sought to improve energy efficiency at the Hawaiian Airlines Airport Center. In 2016, Hawaiian acquired the 14-story, 111,000 square-foot building – located near our Honolulu headquarters and the Daniel K. Inouye International Airport – to provide extra office space for a growing ‘ohana. 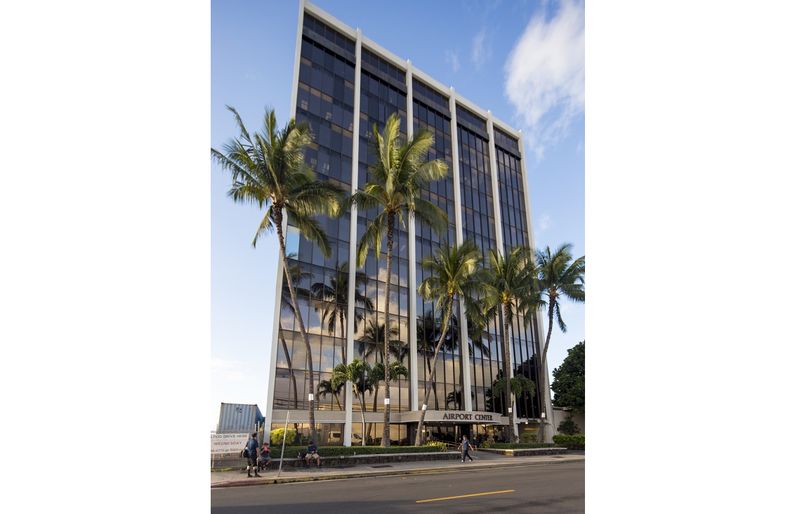 In addition to making immediate building repairs to address deferred maintenance, Hawaiian invested in a variety of improvements, including office renovations and system enhancements driven by our collaboration with Carbon Lighthouse.

On the surface, Carbon Lighthouse’s strategy seems simple: collect and measure data, implement changes and repeat. But its projects undergo a meticulous data-driven analysis to understand the unique characteristics of a building to guarantee long-term, sustainable results. To give Mana‘o readers a chance to learn what happens behind the scenes, we met up with Carbon Lighthouse at the Airport Center to walk us through the process of flipping a building:

Carbon Lighthouse set baseline data by conducting a comprehensive review of the Airport Center’s building management plans, past and current electric bills, and pulling information from existing hardware on each floor. 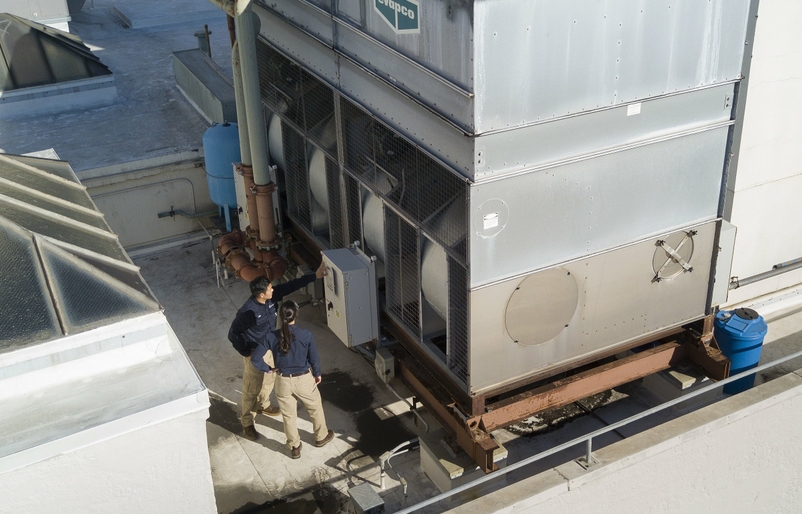 After collecting the basics, analysts established an “energy blueprint” of the Airport Center to map potential areas of focus, and engineers deployed over 110, 2-by-3-inch sensor boxes throughout the building. 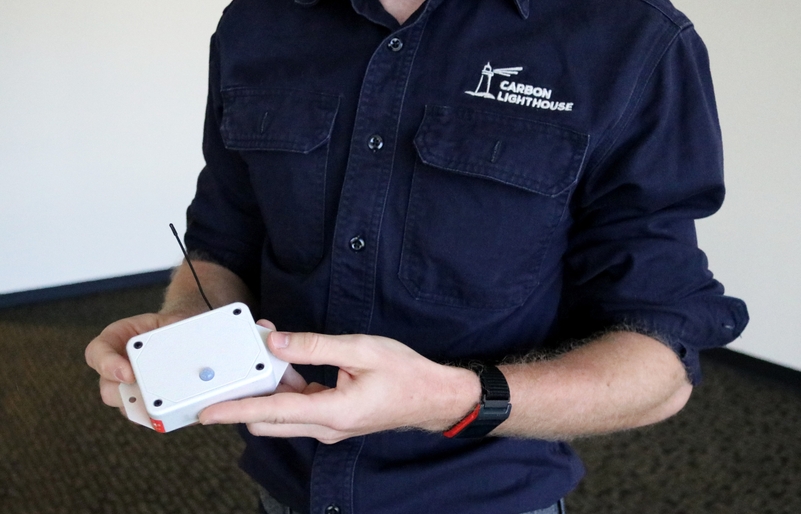 Carbon Lighthouse installs these small sensors throughout a building's frame to collect millions of data points related to energy usage.

The instruments attach to the surfaces of existing systems that control water temperature, flow rates in HVAC (heating, ventilation, and air-conditioning), lighting and occupancy to collect millions of thermodynamic data points each day. 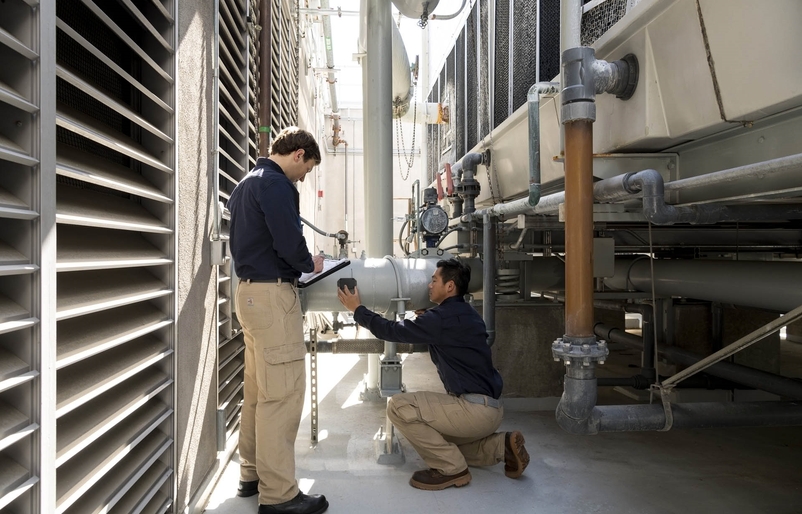 Engineers do a thorough analysis of the building and place their sensors in areas where energy usage can be most easily detected, including water heaters, pipes, and more.

“Carbon Lighthouse strategically places each temporary and permanent sensor to ensure we’re getting a true and accurate sense for our clients’ real energy use,” said Louis Concato, executive account manager at Carbon Lighthouse. “The data from these sensors enables our engineers to work closely with building managers to identify optimal energy savings both in the short and long term.” 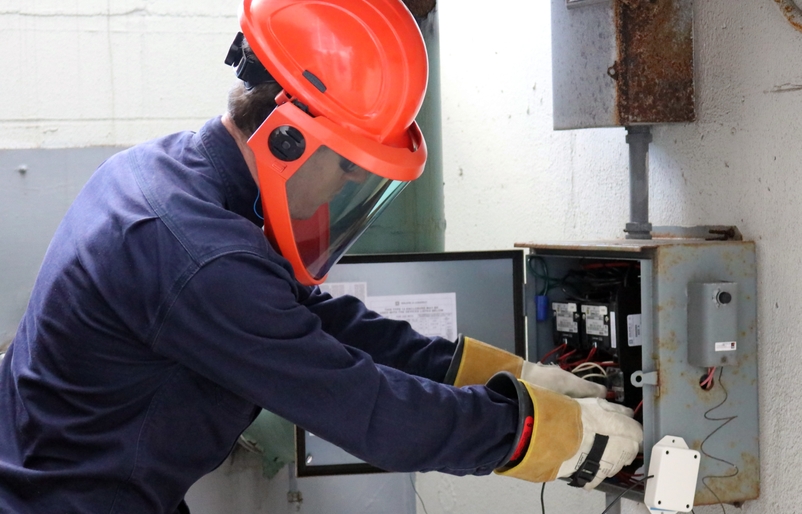 An engineer installs a sensor in an electrical box atop the Airport Center.

After two months of data gathering, Carbon Lighthouse pinpointed inefficiencies and recommendations for modifications, including:

Hawaiian’s efforts to conserve energy is part of a broad goal to be a more sustainable business and lower carbon emissions in the air and on the ground.

"As the new owners of the Airport Center, we set out to pursue the most cost-effective and eco-friendly energy efficiency solution tailored to the building as well as the needs of our employees and tenants who work in it," said Elizabeth Loomis, senior manager of corporate real estate at Hawaiian. “Our Carbon Lighthouse partnership is helping us modernize workspaces while reducing our reliance on fossil fuels.”

While our optimization of the Airport Center is near completion, Carbon Lighthouse engineers will continue to monitor energy usage to ensure our systems are operating at maximum efficiency. For example, sensors can flag unusual changes in energy consumption to help us understand what may be causing sudden spikes or drops in energy. 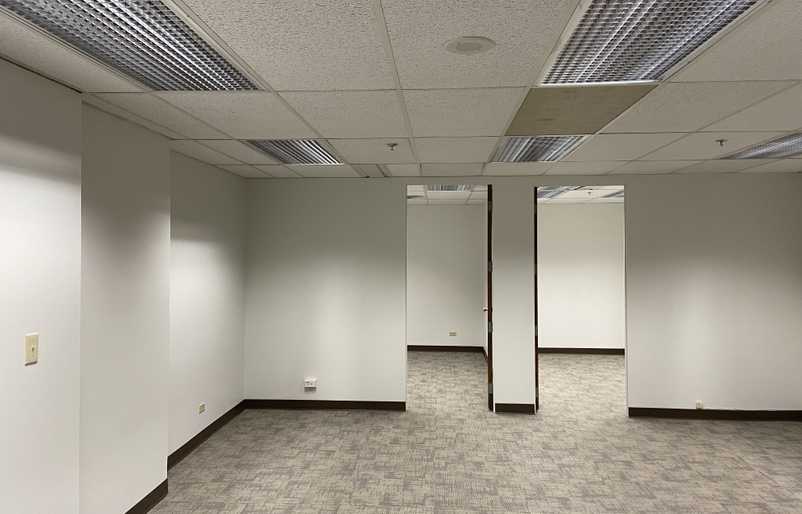 This space may look like your average office, but behind-the-scenes it's an energy-efficient workspace recently optimized by Carbon Lighthouse.

Together, Hawaiian Airlines and Carbon Lighthouse look to reduce approximately 654,000-kilowatt hours per year, the equivalent of powering 80 homes annually.*

“The progress is both rewarding to me personally and to everyone at the company,” said Concato. “The team that we worked with at Hawaiian has been mission-aligned, both in terms of protecting Hawai‘i and making buildings more efficient. It’s awesome to see a company [like Hawaiian], whose core is not real estate, invest in this initiative.”

To learn more about Carbon Lighthouse and its work, click here.