In navigating his creative brainstorms, local designer Keola Nakaʻahiki Rapozo says tapping into a Hawaiian mindset is like following a compass. For Rapozo, the co-founder of Hawaiʻi brand FITTED, thinking Hawaiian means reconnecting to a mainframe rooted in culture, language and perspective. In looking through this lens, Rapozo envisioned the word ōhāhā, the focus of his latest collaboration with our airline in celebrating Mahina ʻŌlelo Hawaiʻi (Hawaiian Language Month).

Ōhāhā, meaning flourishing, fully developed and healthy, stemmed from Rapozo’s commitment to designing with a sense of place and perpetuating ʻōlelo Hawaiʻi – starting inside his home. A native Hawaiian raised in a predominantly blue-collar community on Oʻahu, Rapozo didn’t grow up with the language. 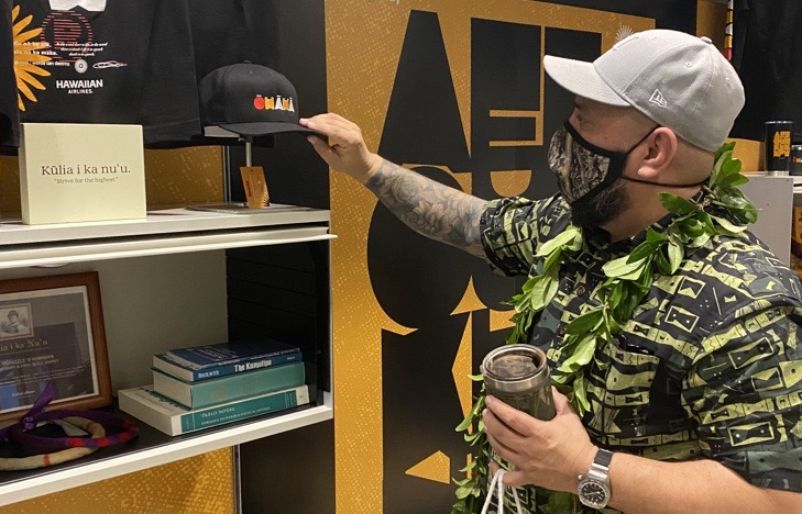 Rapozo pictured in our Honolulu headquarters with select items from our Mahina ʻŌlelo Hawaiʻi collection.

“I was very much immersed in Hawaiian culture growing up, but back then [in the 1980s and 90s] things were different,” Rapozo said. “We weren’t encouraged to learn ʻōlelo Hawaiʻi, but cultural practices, like dancing hula, farming and working with kalo (taro) were very apparent. At that time, nobody was teaching ʻōlelo Hawaiʻi. For someone to speak back then, at least in my experience, was rare.”

Years later, Rapozo marveled at the reintroduction of ʻōlelo Hawaiʻi in public schools (done at the helm of the Hawaiian revitalization movement). “I thought it was brilliant that the native Hawaiian community was establishing all-Hawaiian speaking schools," he said. "I knew that if I ever had a child, I was going to commit to teaching them the language.” 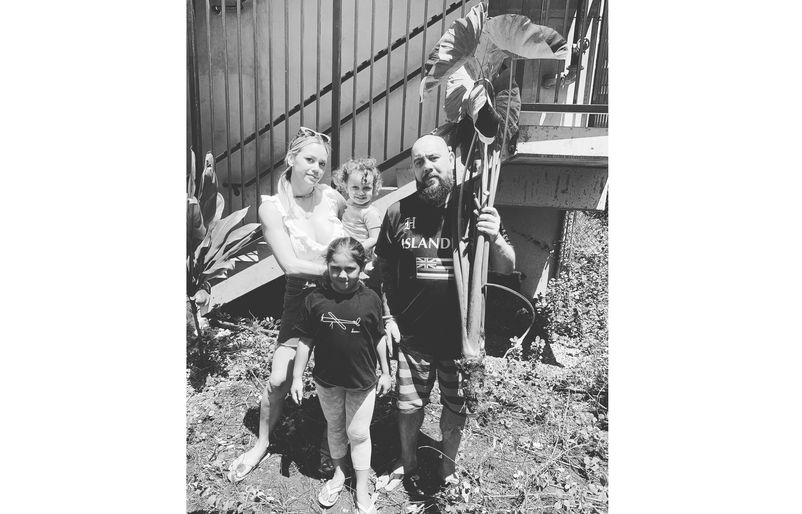 Rapozo with his ʻohana holding a kalo (taro) plant pulled from their māla (garden).

Today, Rapozo and his wife have two daughters, ages 3 and 9, who attend Ke Kula Kaiapuni ʻO Ānuenue, a K-12 Hawaiian language immersion public school. But for him, language is just the start. “I want my children at some point to be able to think Hawaiian, which is a different thing than speaking Hawaiian,” he said. “If I can get my daughters to learn how to look at things through a Hawaiian lens first, I think that will be incredibly beneficial in any aspect of their lives.”

Have time to learn a new moʻolelo (story)? Keola Rapozo shared one of his favorites that inspires his work every day and highlights how one can think Hawaiian.

“Ōhāhā is a Hawaiian word that describes being full, and my interpretation of it is, ‘How do I apply ōhāhā, fullness, to my own life?’ I want to give my daughters confidence, set them up for success and use culture and language to understand the world," he said. "There’s a Hawaiian proverb that says, ‘I ka 'ōlelo nō ke ola, i ka 'ōlelo nō ka make,’ or ‘In language there’s life, and in language there’s death.’ Words are powerful, and we can choose how to use our language. For me, I’m using my language and layering it with my interpretation of ōhāhā to build kiʻi (imagery); to share moʻolelo (stories) through kiʻi; to leave this space better for my daughters and the next person.” 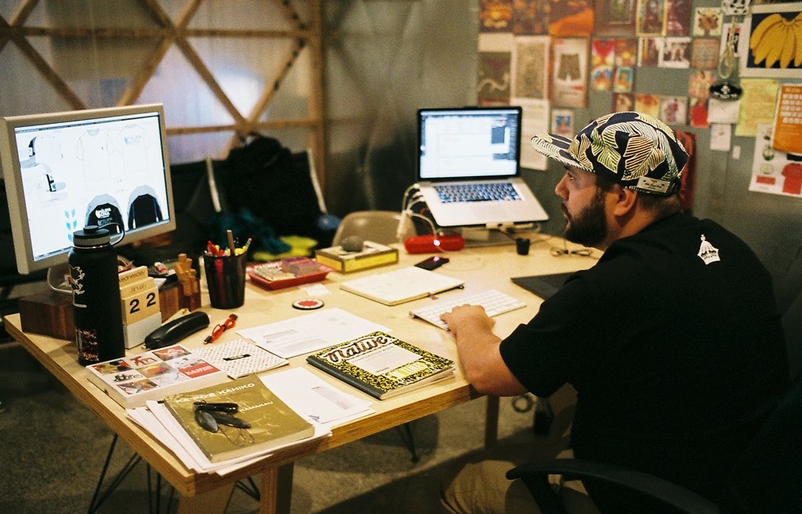 Photo credit: Mark Kushimi
Rapozo at his work studio in Honolulu where he conceptualizes his cultural and island-inspired designs.

This is not our first collaboration with Rapozo, who is best known for spearheading streetwear fashion of headwear and apparel inspired by Honolulu’s urban scene. In 2011, we tapped Rapozo to create Hawaiian patterns and branding during a major renovation of our corporate headquarters. In 2015, he partnered with POW! WOW! Hawaiʻi in the painting of murals that adorned our Honolulu ground service vehicles.

“This [Hawaiian's corporate headquarters] is a very endearing place for me,” Rapozo shared. “Working on the initial project with Hawaiian Airlines opened up a beautiful, long-lasting relationship between our companies. It’s been fruitful for me and for FITTED, which opened up our portfolio of client work. I’ve learned a lot through this partnership. I’ve been fortunate to consult on Hawaiian’s uniform projects, cabin designs, service truck projects, branding, etc., and always felt that Hawaiian valued my perspective.”