We couldn’t think of a better way to close the year than to make history with ‘ōlelo Hawai‘i, the mother tongue of the Hawaiian Islands. On Dec. 21, in conjunction with the second anniversary of our service between Haneda Airport (HND) and Kona International Airport (KOA), our flight and guest services crew hosted the first international Hawaiian language flight.

All guests on flight HA852 from HND to KOA became a part of Hawaiian Airlines’ history and experienced ‘ōlelo Hawai‘i from six flight attendants fluent in the Hawaiian language. 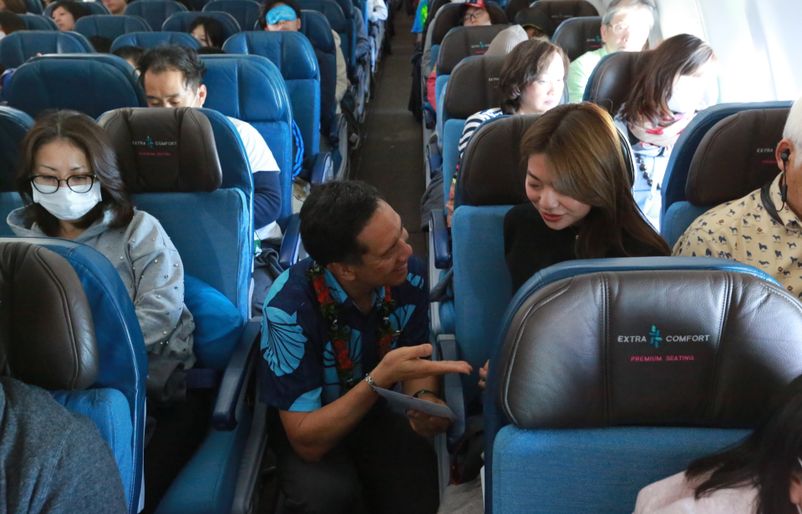 The special anniversary flight came as part of our airlines’ dedication to incorporating the once almost-extinct language into our workplace.

Prior to take-off, we welcomed guests with an oli (Hawaiian chant) at the gate, an essential part of celebrating a milestone in Hawaiian culture, while Japan Country Director Takaya Shishido offered special remarks on the anniversary flight. 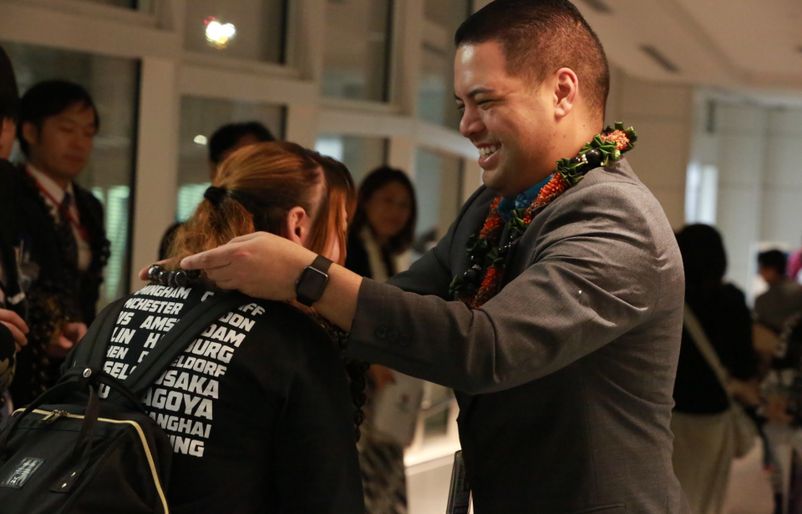 “What an honor it is to celebrate the second year of service between HND and KOA by bringing ‘ōlelo Hawai‘i aboard our aircraft. As Hawaii’s hometown carrier, it is our responsibility to share the stories and culture of the Islands,” shared Shishido. “Today, we live up to that duty and welcome you, our guests, to learn ‘ōlelo Hawai‘i from fluent-speaking members within our own Hawaiian Airlines family.” 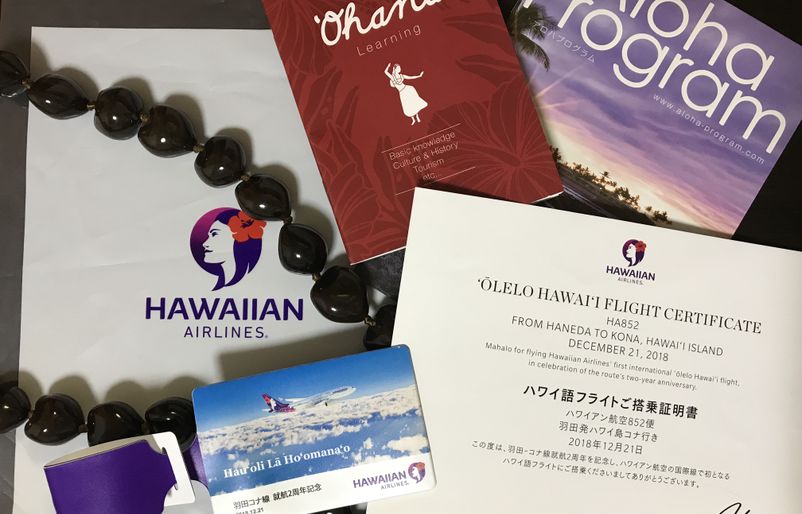 The full ‘ōlelo Hawai‘i kit that was distributed to all guests on HA852.

Our crew conducted all boarding and in-flight announcements in ‘ōlelo Hawai‘i, followed by Japanese and English translations. Each guest was greeted with kukui nut lei before departing HND and fresh flower lei upon deplaning at KOA. They also received a travel-size language book, a “how-to” guide for ordering drinks in Hawaiian, and a commemorative certificate of participation. 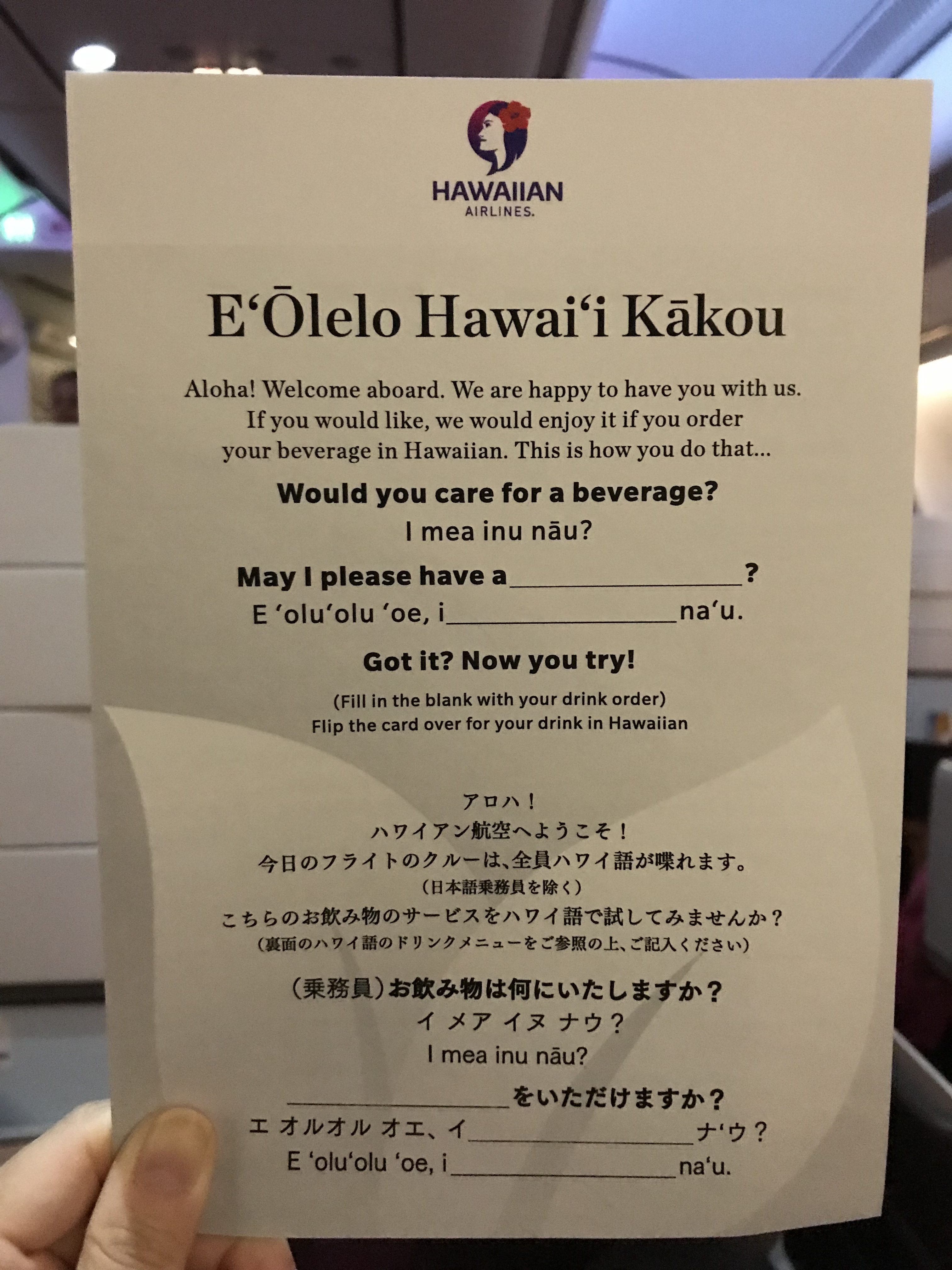 Guests received a cheat sheet on how to order their drinks in Hawaiian language.

“[These ‘ōlelo Hawai‘i flights] are another opportunity for our Hawaiian language to thrive,” shared Punahele Kealanahele Querubin, a flight attendant on HA852. “When I visit Japan and let people know that I am from Hawai‘i, they get so excited because they're very interested in things Hawaiian. I really appreciate their respect for our culture.” 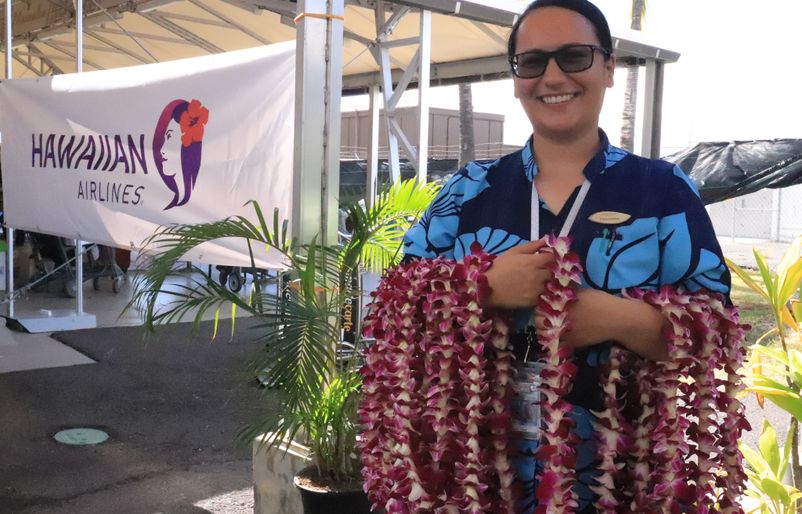 Guests who flew on our commemorative HND to KOA flight were welcomed on the Island of Hawaii with fresh lei, live entertainment and a warm aloha from our ‘ohana.

Flight HA852 was the seventh and final ‘ōlelo Hawai‘i flight of 2018 that our in-flight team has successfully organized. In April 2018, three of our flight attendants took guests flying between Hilo and Honolulu by surprise when they conducted their in-flight announcements entirely in ‘ōlelo Hawai‘i during the Merrie Monarch Festival. 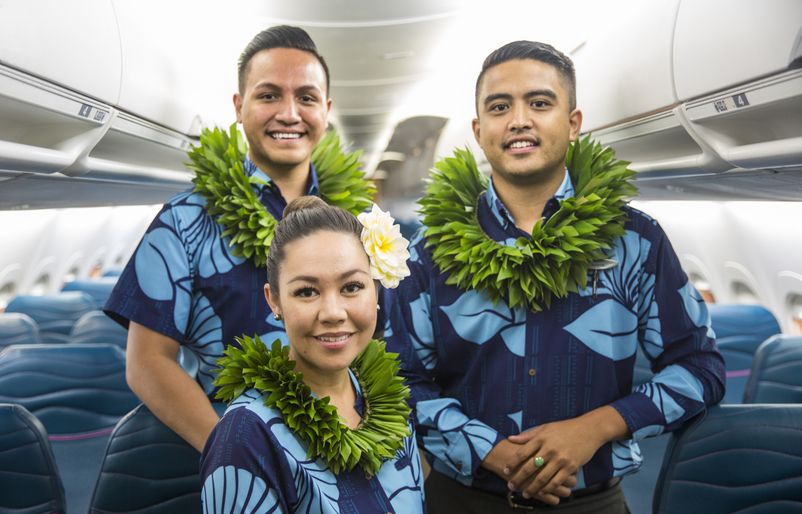 The crew leading the ‘ōlelo Hawai‘i flights between Hilo and Honolulu.

That same month, our in-flight ‘ohana shared Hawaiian culture with guests traveling between HNL and McCarran International Airport in Las Vegas, making history once again with the first native language flight between Hawai‘i and the U.S. Mainland.