Employees across our airline are joining hands this February to perpetuate mahina ʻōlelo Hawaiʻi (Hawaiian language month). This year, through their collective actions, from organizing surprise ʻōlelo Hawaiʻi flights to partnering with native Hawaiian designer Keola Nakaʻahiki Rapozo, we are proud to share Hawaiian language and culture with our guests and the communities we serve.

Mathew 'Manakō' Tanaka, senior specialist of community and cultural relations at Hawaiian Airlines, shared his pride for his colleagues: "Pōmaikaʻi ka Hui Mokulele ʻo Hawaiian i ke koho ʻana o nā kānaka makeʻe ʻōlelo Hawaiʻi iā kākou ʻo ia ko lākou wahi e lawelawe ai i ka hana. Lei pāpahi kākou i ko lākou kuanaʻike Hawaiʻi. He kōkua pū ia i ke kākoʻo ʻana i nā limahana ʻē aʻe i hoihoi e hoʻomau i ko lākou ʻonipaʻa ʻana i ka ʻimi naʻauao ma nā mea Hawaiʻi." (“We are fortunate at Hawaiian Airlines that those with a passion for Hawaiian language have chosen us as their place of work. Their world view contributes to a diverse lei with which our company adorns itself. They are also an invaluable resource for those employees who are steadfast in their quest for knowledge about Hawaiian things.") 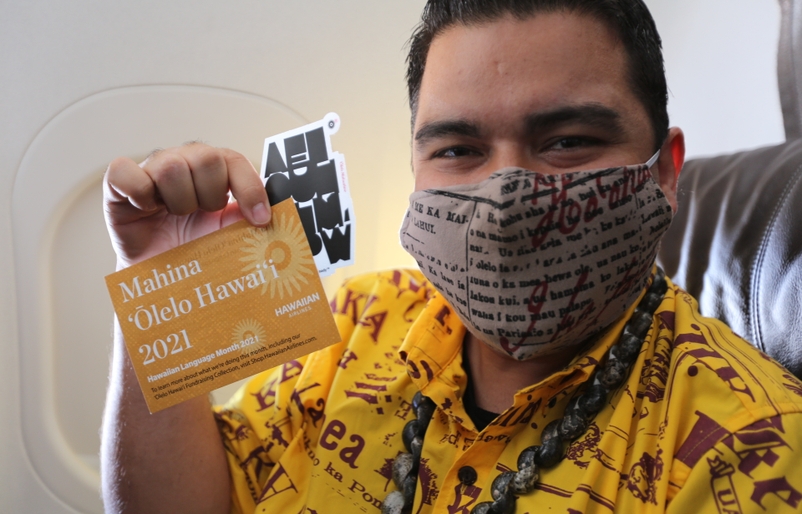 Tanaka pictured holding the ʻōlelo Hawai‘i interaction card that was passed out to guests on four surprise ʻōlelo Hawai‘i flights between Honolulu and Kona on Feb. 1. Guests were encouraged to use the card to request beverages in ʻōlelo Hawai’i from the Hawaiian language-certified flight attendants who crewed the flights.

This month on Manaʻo, we’re featuring moʻōlelo (stories) of employees who dedicate themselves to sharing ʻōlelo Hawaiʻi with others. Manaʻo readers can also join us in our celebration by visiting our Instagram channels and participating in our weekly social media sweepstakes, which encourage followers to learn ʻōlelo Hawaiʻi from employee-created videos and share a clip of themselves speaking the phrases for a chance to win a prize.

To read more stories about past ʻōlelo Hawaiʻi initiatives at Hawaiian Airlines featured on our blog, click here.

Boeing 717 Captain Marc Kealiʻiokalani Naval discovered his love for learning ʻōlelo Hawaiʻi at a young age, thanks to his tutu (grandmother).

“When I was younger, in the mid-to-late 80s, the state had this program where they hired kūpuna [elders] throughout the community to go to into schools and teach Hawaiian songs, dance and the language to elementary students. They [the state] didn’t have dedicated ʻōlelo Hawaiʻi speakers back then, so they hired them to go out and share their mana’o [knowledge] with the children,” Naval said. “They hired my tutu, and she had this little filing box at home where she kept her handouts for her students. One of them was a map of each island divided into ahupuaʻa [traditional subdivisions] that the keiki had to color. My school had a different kūpuna assigned to work with us, but when I would come home, we would go through those handouts together, and she would teach me.” 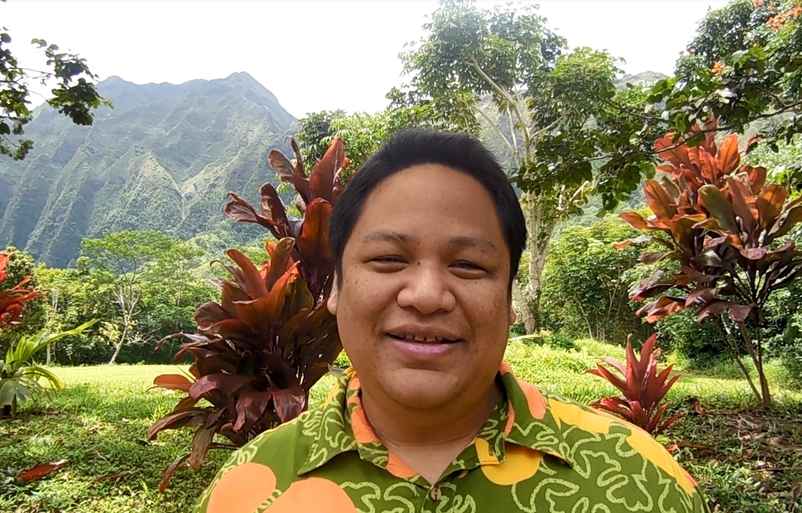 Naval pictured at his home in Windward Oʻahu.

Naval, now 42 years old, was born and raised on Oʻahu and is part Hawaiian. Throughout elementary and middle school, Naval spoke ʻōlelo Hawaiʻi casually, using commonly used words and phrases that he learned from his ʻohana (family). His formal education on ʻōlelo Hawaiʻi began at the age of fourteen when he started attending Kamehameha Schools, a private, statewide school system established by the will of the late Hawaiian princess Bernice Pauahi Bishop to improve the well-being of Hawaiians.

“When I was in ninth grade at Kamehameha, I had to fulfill language requirements. I wanted to take Japanese because tourism from Asia was growing so fast, and I thought it would be cool to speak with Japanese tourists. But my mother said, ‘No, you need to learn your language and culture.’ I was only required to take two years of language courses, but I ended up taking three years and spent another year learning hula,” Naval recalled.

At the same time, Naval, a first-generation pilot, was fostering a passion for flight, which started in the passenger seat of glider flights over Oʻahu’s North Shore. After graduating from Kamehameha, he attended Embry-Riddle Aeronautical University in Arizona, where he and his wife, an aerospace engineer and part Hawaiian as well, met in the school’s Hawaiʻi club. Naval went on to become a pilot at a regional carrier in Texas, but when a family emergency called he and his wife back to Hawaiʻi, they’d make their long-awaited return to the Islands for good. Soon after, they were both hired at Hawaiian Airlines. 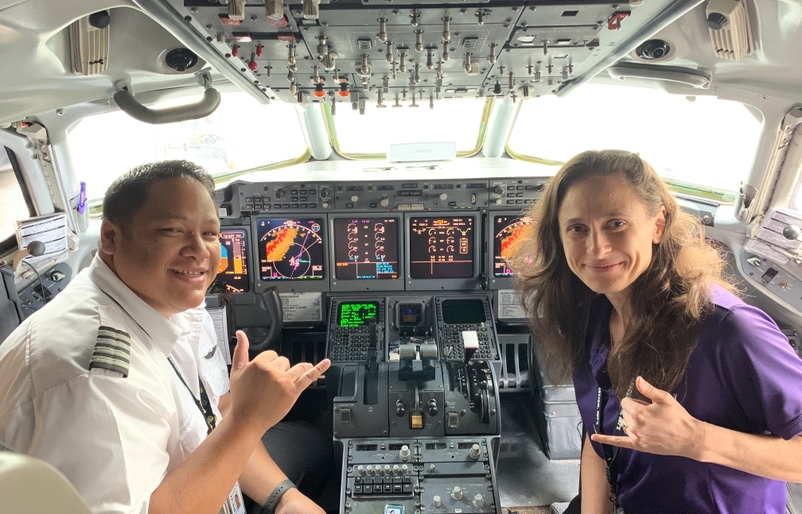 Naval pictured in a cockpit with his wife, Maria, a senior engineer at Hawaiian Airlines. (Editor's note: This photo was taken prior to the COVID-19 pandemic.)

“There was a good amount of people at Embry-Riddle who were from Hawaiʻi, and almost everyone from Hawaiʻi who attended Embry-Riddle wanted to work for Hawaiian Airlines,” he said. “Working at Hawaiian Airlines is like hitting the jackpot, because Hawaiʻi was our home and home is where we all wanted to be. When I moved back to Oʻahu with my wife in 2012, we both ended up getting jobs at Hawaiian. I joined as a first officer on the Boeing 767, which I flew for about six years.”

After flying transpacific routes on the Boeing 767, a fleet our airline retired in January 2019, Naval’s interest in Japanese language was renewed. “Japan was my favorite route to fly, so I wanted to learn Japanese again. I enrolled at Windward Community College and applied for Japanese classes. About a week before my lessons started, I got an email saying that the class had gotten canceled,” he said. “I had already gone through all of the paperwork and the long process of signing up. So, instead of wasting that time, I asked what other language classes were available. There ended up being an ʻōlelo Hawaiʻi class and so I enrolled. They were night classes, twice a week, and taught by kumu [teachers] who were native speakers. I took classes there for two years.”

Naval continued his education with a year of advanced courses at the University of Hawaiʻi at Mānoa’s Hawaiʻinuiākea School of Hawaiian Knowledge. Though, upon receiving a captain’s promotion on the Boeing 717, the aircraft that serves our Neighbor Island network, he hung his student hat to focus on his career.

Reflecting on his experience, Naval is grateful for having learned from several prominent ʻōlelo Hawaiʻi speakers, including Kumu Fred “Kalani” Meinecke, Kumu Kahikina de Silva, Dr. R. Keawe Lopes, and Kumu Tuti Kanahele Sanborn of Niʻihau, an island southwest of Kaua‘i where a dialect of ʻōlelo Hawaiʻi is the primary language spoken by residents.

He brings his passion for the language and culture to the flight deck each day. For example, if you hear your cabin announcements made in ʻōlelo Hawaiʻi, it just may be Naval in the captain’s seat. 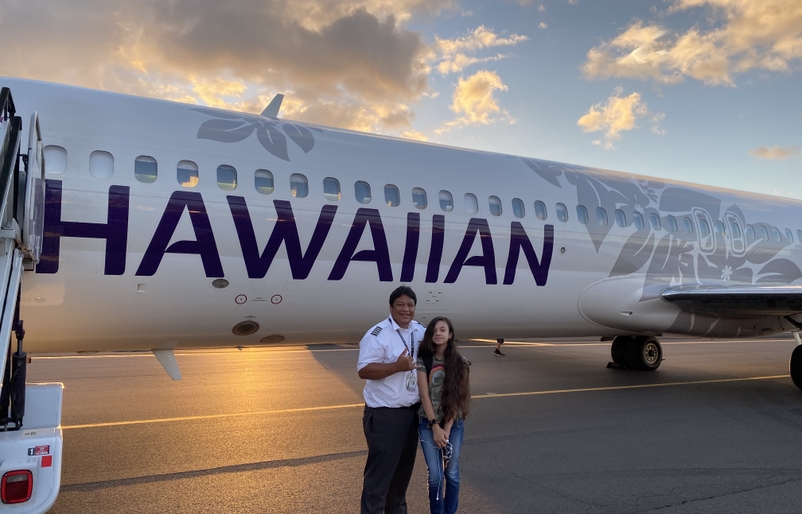 Naval pictured with his daughter Miabella on the tarmac at the Daniel K. Inouye International Airport (Editor's note: This photo was taken prior to the COVID-19 pandemic.)

“In my Hawaiian 301 class, I wrote my captain’s announcement in English and worked with one of my kumu to translate it,” Naval said. “I say it occasionally after people have boarded the aircraft. I do the same when asking the flight attendants to be seated. I am not fluent, but I try to speak in ʻōlelo Hawaiʻi when I can. I believe that being able to speak the language is what sets me apart from other captains.”

Also, if Naval finds out that there is a ʻōlelo Hawaiʻi speaker onboard or a child learning to speak it, he’ll go the extra mile to make sure he greets them. “When I meet little kids (in the cabin or the airport) who are learning to speak the language, I hope that they get excited and think, ‘Hey, this guy is a captain, and he can speak ʻōlelo Hawaiʻi?!’” he said. “And I also hope other speakers can see that I am trying.”

Naval’s next goal is to take more classes and help his daughter learn the language. “I want ʻōlelo Hawaiʻi to become more normal and for people to want to learn,” he said. "It’s our culture, our people, and something we are proud of.” 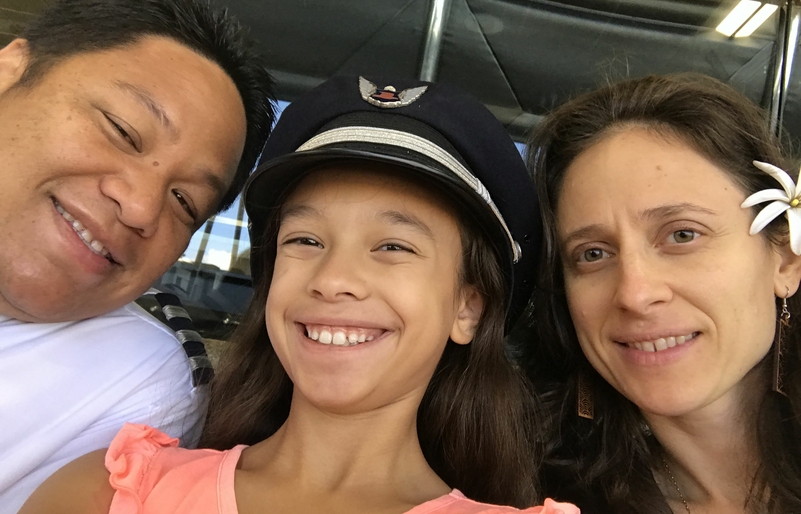 Naval and his ʻohana. (Editor's note: The photo was taken prior to the COVID-19 pandemic.)

Want to start your journey with ʻōlelo Hawaiʻi? Naval recommends Manaʻo readers begin with this challenge: “Try to say the names of Hawaiʻi destinations correctly. I used to say them wrong often, but after taking my classes, I am more vigilant about saying Honolulu, Kahului, Līhuʻe, etc. correctly.”