Sleeves pushed up, gloves on and a fresh coat of reef-safe sunscreen: this is what business attire looks like for the Sea Cleaners, a New Zealand nonprofit committed to preserving kiwi coastlines. Hawaiian Airlines recently teamed up with the organization to fly three Hawai‘i youth leaders from Honolulu to Auckland for a stewardship trip of a lifetime.

Our Partnership with the Sea Cleaners

Hawaiian Airlines has offered non-stop service between Auckland and Honolulu since 2013. Our ‘ohana first partnered with the Sea Cleaners last year to bring nine Māori youth to O‘ahu for International Coastal Cleanup Day. Together, they tackled plastic pollution head on, removing marine debris from our Island’s hardest-hit coastlines, engaging in cultural exchanges and working with local schools to share their impactful field stories. 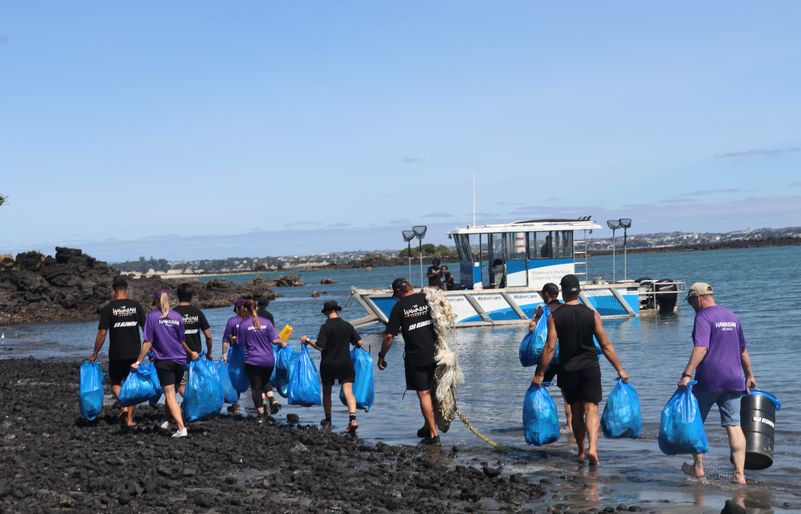 “Our partnership with Hawaiian Airlines has been a wonderful advancement in engaging and driving the youth leadership component here. It’s just been sensational,” said Hayden Smith, boat captain and co-founder of the Sea Cleaners.

Last month, we collaborated with Sea Cleaners again, as well as Nā Kama Kai, a Hawai‘i nonprofit that educates youth about ocean conservation, to select three local teenagers to engage in environmental initiatives in New Zealand. Once selected, the group embarked on a weeklong trip to take on Kiwi shores and help spread a message of sustainability to North Island communities.

We worked with our two nonprofit partners to select the right candidates. The result: three O‘ahu boys who, day in and out, are passionate caretakers for our Island home and leaders among their peers: 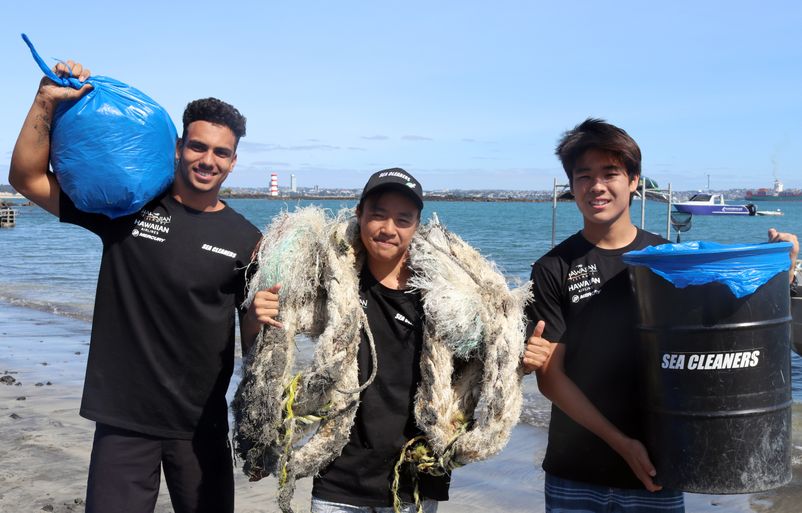 Kamohaiki “Kamo” from Waimānalo and Brennan from Aiea were selected based on their leadership through volunteer work with Nā Kama Kai. Both are watermen at heart who have grown up in and around the ocean, from surfing to freediving. They encourage their friends to be involved in ocean conservation and have worked to reduce their respective community’s consumption of single-use plastics.

Lio from Hale‘īwa has followed the Sea Cleaners for years and previously volunteered with the group in Hawai‘i. Outside of school, Lio helps at his family’s restaurant, where he has worked to minimize plastic use. An advocate for a greener restaurant industry, he is planning a plastic-free restaurant outreach program.

“The three young men whom we selected are here because they’ve put their hand up in one way or another to help the ocean and the environment, either through reducing plastic consumption in an industry or helping other community groups,” Hayden shared while in New Zealand with the group. “They were not looking for any sense of reward for what they were doing, they just knew it was the right thing and they wanted to do it.” 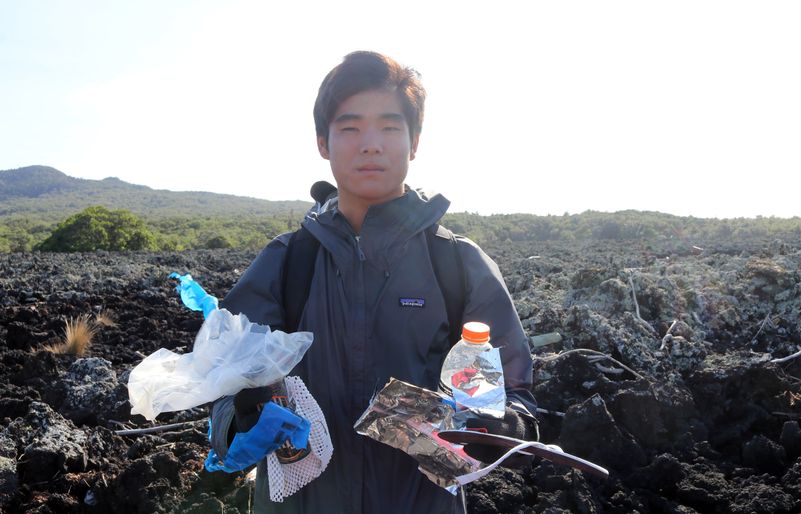 Brennan holds up a sample of trash he collected at the start of the Rangitoto cleanup initiative.

Duane Desoto, founder and CEO of Nā Kama Kai, added, “Today’s youth hold the key to our Islands’ future, and these boys were standout candidates who embody the meaning of ‘mālama honua’ (to care for our island Earth) through their actions.”

Humbled by the boys’ journey ahead, our Team Kōkua volunteers packed their bags and joined them and the Sea Cleaners for one of their activities: a half-day coastal cleanup at Rangitoto Island.

As the sun stretched its arms over the morning horizon, 20 volunteers, including our seven Team Kōkua members, loaded into a fleet of harbor boats to cross the Hauraki Gulf. We had one goal: clean and remove trash from Rangitoto, an uninhabited volcanic island and popular hiking attraction seven miles from Auckland’s port. 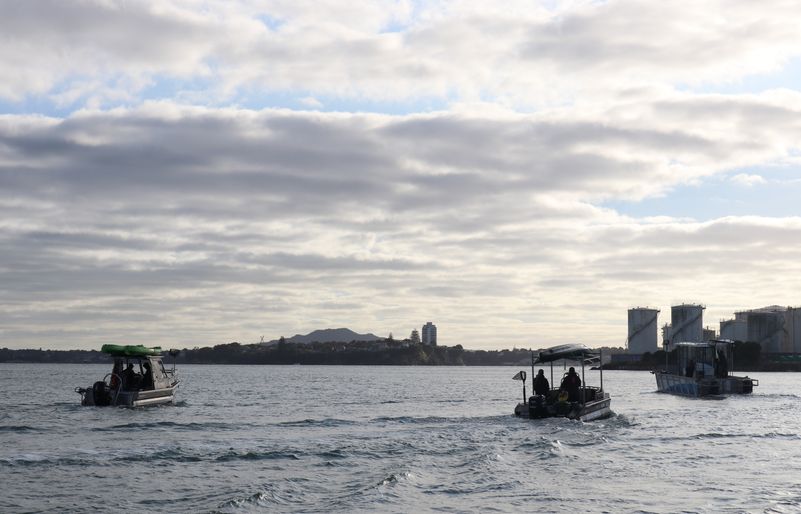 Throughout the morning, our group traversed Rangitoto’s rugged coastline, pulling items like plastic toothbrushes, drinking straws, commercial fishing nets, stray takeout bags, and single-use utensils from the grips of the rocks. Hayden forewarned us that the island is a hot spot for trash – pushed to shore by the gulf’s currents, tides, and winds – and is cleaned monthly by their volunteers due to how quickly it piles up. 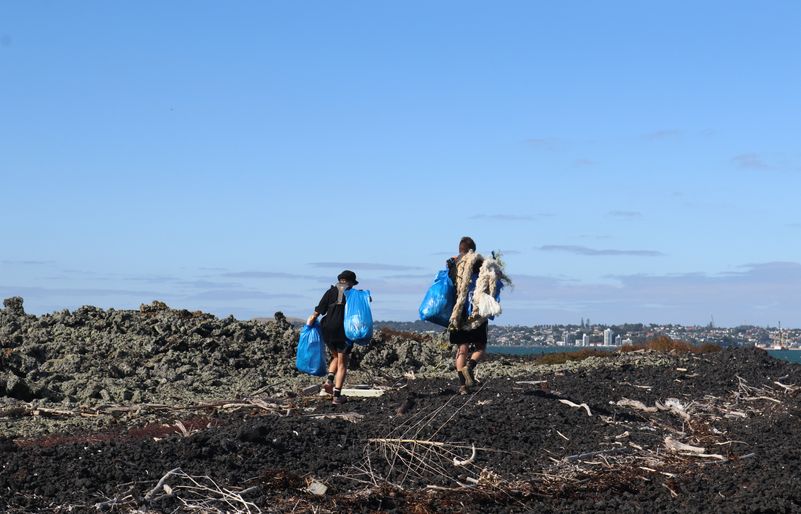 Sea Cleaners volunteers carry away bags of trash and boat-mooring ropes that had washed ashore.

“People don’t live here, but we’re still finding rubbish and it’s shameful,” Kamo said. “If we want our kids and grandkids to experience something as beautiful as [Rangitoto], we have to make a change right now.” 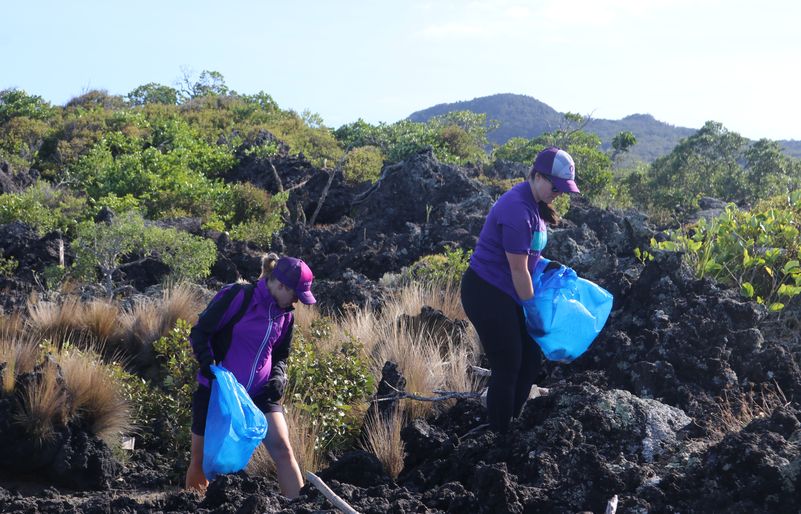 Team Kōkua volunteers make their way along the Rangitoto coast to remove trash from the rocky shoreline.

At day’s end, we loaded over 15 bags of recovered trash into the boats and became overwhelmed with a shared sense of accomplishment. Our Team Kōkua volunteers, the three youth and the Sea Cleaners left the island cleaner than we found it, but we knew the battle was far from over. 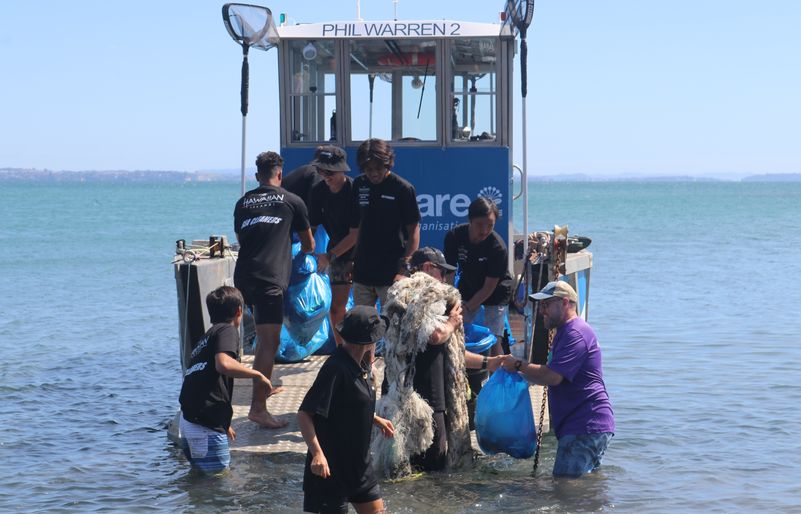 Team Kōkua and Sea Cleaners volunteers working together to load a boat with bags of collected debris.

As we boarded our flight back to Honolulu, the Sea Cleaners would continue their endeavor to educate the next generation about the impact plastics have on the environment.

“Be mindful that every time you let go of something, it’s going to end up somewhere else,” said Debbie Nakanelua-Richards, who heads Hawaiian’s Team Kōkua program as director of Community Relations. “Until we stop consuming those things, we have to be more consistent in cleaning up and bringing ourselves together to create change.”

Learn more about the organizations we worked with on this trip, Hawaiian Airlines’ commitment to sustainability, and how you can get involved: