When Hawaiian Airlines commits to aloha in everything we do, we must also commit to supporting the language and culture from which aloha came. Our ‘ohana was honored to support the travel of the University of Hawai‘i at Mānoa’s Hawaiian Theatre Program to bring its historical epic, ‘Au‘a ‘Ia: Holding On, to New York City.

After performing five (mostly sold out) shows at the New York Theatre Workshop’s Reflections of Native Voices Festival, the cast of 50 students returned to Hawai‘i last month. Their success marked a moment of pride for Hawai‘i, and many throughout the community, including myself, were curious to hear about their journey to share Hawaiian culture on the U.S. East Coast. 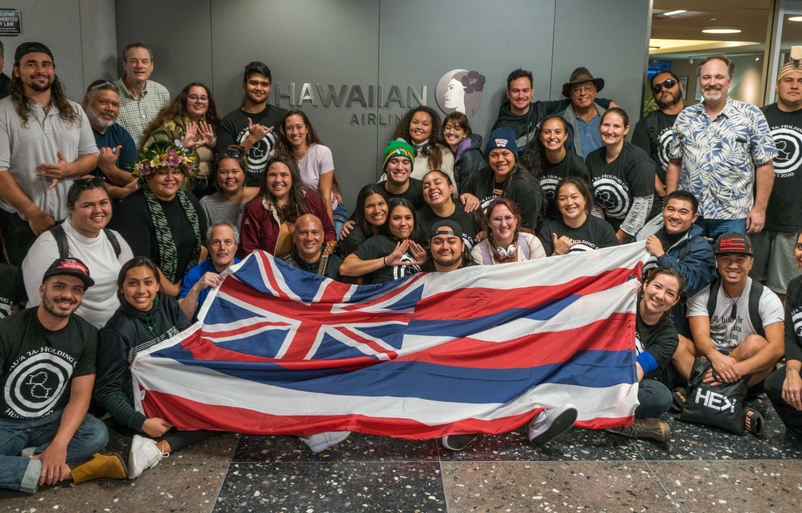 Photo credit: ‘Āina Paikai
The youth actors gathered in front of the Hawaiian Airlines Premier Lounge at the Daniel K. Inouye International Airport before their flight to New York City.

In recognition of ‘Ōlelo Hawai‘i (Hawaiian language) Month this February, I reached out to Dr. Kaliko Baker, assistant professor at the UH Mānoa’s Kawaihuelani Center for Hawaiian Language and husband of ‘Au‘a ‘Ia: Holding On founder Hailiʻōpua Baker to learn more about the play.

After immersing myself in the story of the production, I was humbled (once again) as a speaker of a thriving Hawaiian language and culture today. Because of my kumu (teachers) and the efforts that they’ve put forth to pave the path before me, I have the privilege of sharing in new knowledge with those around me – from a thriving people. Inspired by the play, I am reminded of an old saying:

Great and numerous indeed is the knowledge of the Hawaiian people.

Join me in this "behind-the-scenes" look at UH Mānoa’s ‘Au‘a ‘Ia: Holding On.

Those who cherish the land carry everything – lineage, culture and language – with them. Performing arts helps us pass this knowledge on to future generations, as it has been done by those who came before.

Dr. Hailiʻōpua Baker, director of the UH Mānoa’s Hawaiian Theatre Program, created ʻAuʻa ʻIa: Holding On as an account of her commitment to learning the Hawaiian language and to unearth what it means to be Hawaiian in modern-day Hawai‘i. The play was given life by students who, through ʻōlelo Hawaiʻi, expressed appreciation for their past. 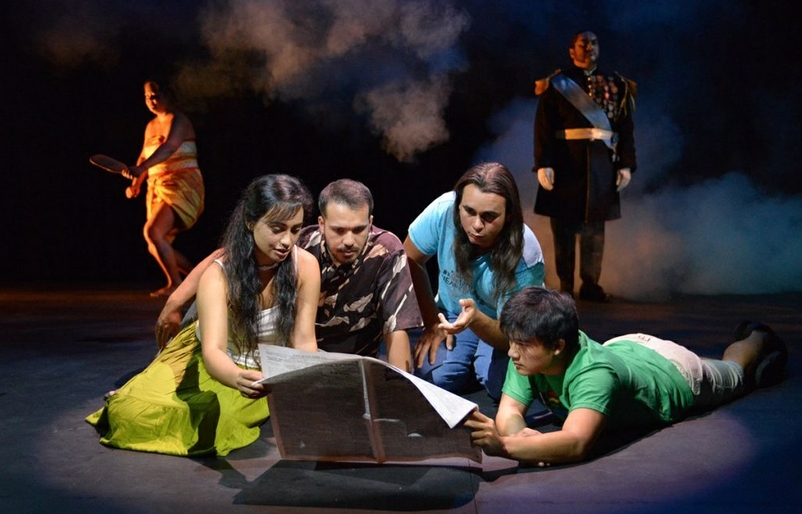 ʻAuʻa ʻIa: Holding On made its debut at the UH Mānoa in September 2019 with more than 50 acclaimed cast members.

According to UH Mānoa’s Department of Theatre and Dance, the production is “a faithful account of Hawai‘i’s past, from the perspective of the four haumāna. Tasked with a daunting research project for class, they embark on a journey that takes them into the repository of 19th-century Hawaiian language archival materials. They connect with their kūpuna (ancestors), explore the meaning of mana (divine power/authority), and interrogate the histories of Ko Hawai‘i Pae ‘Āina (the Hawaiian archipelago).”

The play, Dr. Kaliko further explained, “was created for our people, so that we may come together with a shared responsibility to the land. In that sense, a lot of people came to experience it. They watched, they listened and it struck a chord within them. Our audiences were touched, and it was evident in the outpouring of emotions each night. It is such a beautiful thing, the tales of our people.”

Dr. Kaliko and his wife Dr. Hailiʻōpua Baker’s tale began during an era when students were fighting for the survival of Hawaiian culture in college curricula.

“It was a different time back then. We were students following in the wake of the pioneers who were spearheading the Hawaiian language revitalization movement in the 70s and 80s,” recalled Dr. Kaliko. “It was a revolution because the University of Hawaiʻi at Mānoa was looking to cut Hawaiian language studies in order to save money. We vigorously resisted and the university promised to not cut ʻōlelo Hawaiʻi again at Mānoa.”

The duo has been dedicated to sharing Hawaiian language and culture ever since. He pursued his master’s and doctorate degrees and helped found the UH Mānoa’s Hawaiʻinuiākea School of Hawaiian Knowledge, which encompasses Kamakakūokalani, Kawaihuelani, Kānewai, and Native Hawaiian Student Services. Their story established a path for future students and cultivated enthusiasm and support for all things Hawaiian.

“There was so much positive change,” said Dr. Kaliko. “It’s rewarding to see that these Hawaiian resources are now readily available. We need to continue to push forward, because, like our great chief once said: ‘There’s no turning back.’” 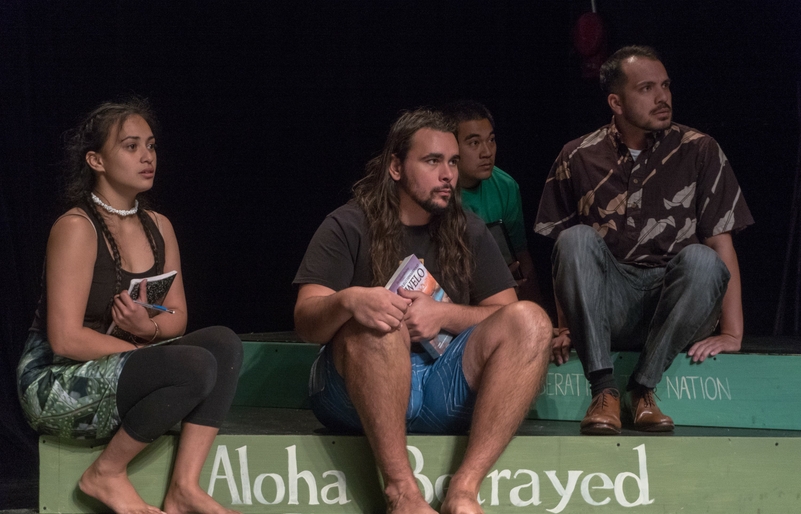 Dr. Kaliko believes Hawaiians must remain rooted in their culture and all that makes them Hawaiian. This passion was the foundation upon which ʻAuʻa ʻIa: Holding On was created. “[Our people] are what will continue to make things ‘Hawaiian’ in this evolving world around us, and so our commitment to truly understanding this responsibility is of utmost importance to ensuring that Hawaiʻi remains Hawaiʻi.”

As the play continues to grow in popularity, Dr. Kaliko and Dr. Hailiʻōpua remain focused on savoring the moment. He takes the most pride in creating new opportunities for the Hawaiian language to thrive. “This means of enjoyment is like the salt that perfectly seasons the food and satisfies your craving,” said Dr. Kaliko.