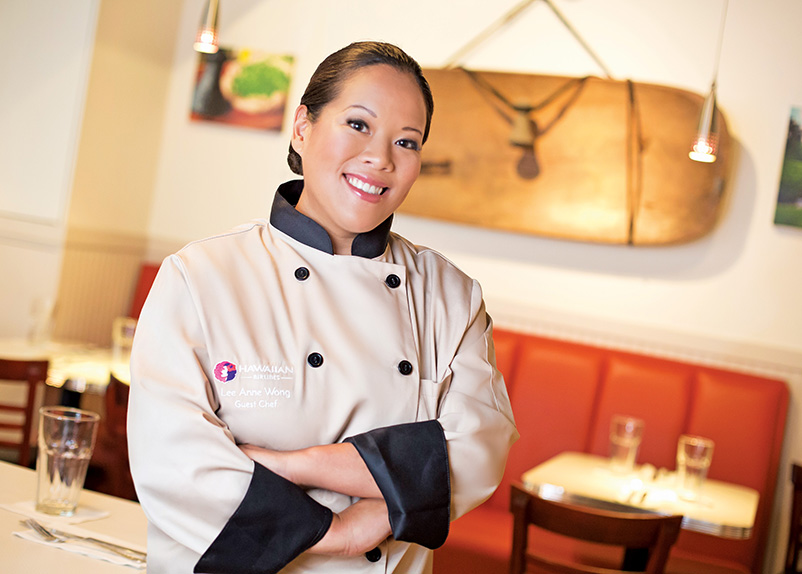 “We saw great success with Chef Lee Anne’s menus during our Featured Chef Series program and more recently, on our Japan routes,” said Renee Awana, managing director of product development at Hawaiian Airlines. “We’re thrilled to extend our relationship with her and look forward to sharing her popular Island cuisine with many more of our guests.”

Wong graduated from the International Culinary Center (ICC), formerly known as the French Culinary Institute, and began her culinary training at Marcus Samuelsson’s Aquavit before playing an integral role in the opening of Jean Georges Vongrichten’s Chinese concept, Restaurant 66.

Wong gained national attention when she appeared on Season One of Bravo’s flagship series “Top Chef.” She later became the series' supervising culinary producer for the next six seasons.

In late 2013, Wong moved from New York City to Honolulu. She debuted Koko Head Café, an island style brunch house located among the popular and eclectic eateries of the Kaimuki neighborhood in 2014, and released her first cookbook, “Dumplings All Day Wong.” In June 2015, Wong joined Hawaiian Airlines’ culinary team as part of its Featured Chef Series. Later that year, Hawaiian entered into an extended collaboration with Wong for meals served on the airline’s growing network of Japan flights.

“I’m honored to step into this new role as Hawaiian’s executive chef and excited to share my culinary style with guests traveling to Hawaii,” said Wong. “I’m also grateful to Chef Chai Chaowasaree for his guidance and support – I have some big shoes to fill!”

“Chef Chai’s contributions to our meal program have been monumental; it’s a bittersweet time as he passes the torch to a new, local chef,” Awana continued. “We’re deeply grateful to him and wish him all the best.”

Wong will work with Chaowasaree during a transition over the next few months. Hawaiian’s in-flight meals will continue to be paired with wines selected by Master Sommelier Chuck Furuya.

About Hawaiian Airlines
Hawaiian® has led all U.S. carriers in on-time performance for each of the past 13 years (2004-2016) as reported by the U.S. Department of Transportation. Consumer surveys by Condé Nast Traveler and Travel + Leisure have placed Hawaiian among the top of all domestic airlines serving Hawai‘i.