“We appreciate the overwhelming support we have received throughout Fukuoka for our new nonstop service to Honolulu,” Theo Panagiotoulias, senior vice president for global sales and alliances at Hawaiian Airlines, said during a news conference in Fukuoka today. “We look forward to welcoming our guests onboard with our warm Hawaiian hospitality and providing convenient access to our Hawaiian Islands.”

Beginning with the inaugural flight on Nov. 26, HA827 will depart Honolulu at 11:50 a.m. on Tuesday, Friday, Saturday and Sunday, with an estimated 5:55 p.m. arrival into Fukuoka on the following day. The return flight, HA828, will depart Fukuoka at 7:55 p.m. on Monday, Wednesday, Saturday and Sunday, arriving into Honolulu at 8:45 a.m. the same day, giving guests ample time to settle into their accommodations, or conveniently connect to neighboring Hawaiian Islands or the airline’s North America and South Pacific destinations. 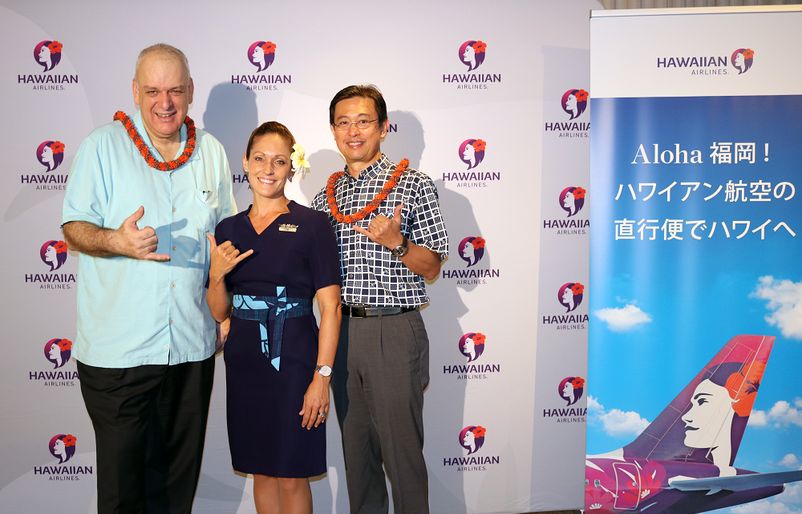 In celebration of Hawaiian’s new service, the airline is offering special $599* (Sun.-Thurs.) and $699* (Fri.-Sat.) roundtrip fares available for purchase through July 19 at www.HawaiianAirlines.com, through travel agencies, or by calling Hawaiian's Reservations Department toll-free at 800-367-5320.

Guests traveling between Fukuoka and Honolulu will enjoy the roominess and comfort of Hawaiian’s Airbus A330 aircraft, which features 18 fully flat Premium Cabin leather seats arranged in a 2-2-2 configuration tailored for couples, families and honeymooners while offering great functionality to business travelers. Hawaiian also offers 68 of its popular Extra Comfort seats with more legroom and enhanced amenities, in addition to 192 Main Cabin seats. All guests will enjoy Hawaiian’s award-winning hospitality, including island-inspired meals prepared by Hawai‘i’s top chefs.

Fukuoka Prefecture is home to more than 5 million of the 13 million residents of Kyushu, the third largest and most southerly of Japan's four main islands. In 1981, the prefecture became Hawai‘i’s first sister-state in recognition of their deep cultural and economic ties.

Hawaiian’s new Fukuoka-Honolulu flights will complement the airline’s Japan network, which includes nonstop service connecting the Hawaiian Islands with Osaka, Sapporo, and both Haneda and Narita airports in Tokyo.

*Subject to government approval. Fares displayed are based on the purchase of a non-stop roundtrip ticket between Honolulu, HI and Fukuoka, Japan. Flights must be booked from now through 7/19/2019. Fares are available for travel only on Sundays through Thursdays from 11/26/2019 – 12/19/19 or 1/1/2020 – 3/31/2020 and are valid only for travel in the Economy (coach) cabin. Fares may not be available over all dates, and fares on some dates may be higher. The number of seats available in this fare class during the travel period shown are limited and may change at any time without notice. Fares include government taxes and fees and carrier fees. Fares are non-refundable, non-transferrable, and non-endorsable. Travel must only be on flights operated by Hawaiian Airlines. Other restrictions apply. Additional baggage charges may apply. 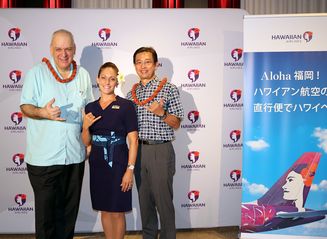 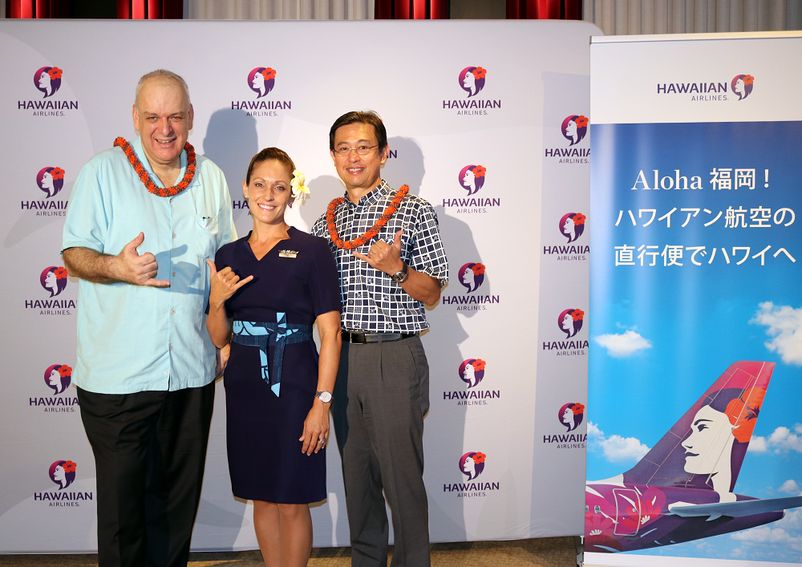