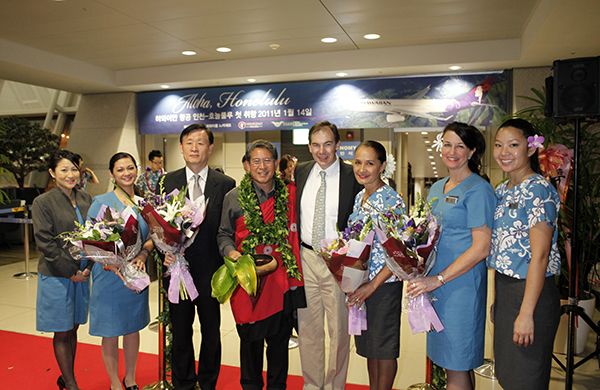 “Korean tourism to Hawai‘i has more than doubled since we started service, and flights to Seoul continue to be a vital and important part of our network,” said Mark Dunkerley, president and chief executive officer of Hawaiian Airlines. “Travelers appreciate our value-for-money offerings, including free checked luggage, premium inflight amenities and the authentic Hawaiian hospitality delivered to every guest. Our employees embody the culture and inherent beauty of our island home, and proudly share the transformative sights, sounds and taste of Hawai‘i the moment you step onboard.”

Before Hawaiian’s entry, the Korean market had long been underserved. In 2010, Hawaii received only 81,758 visitors from South Korea, compared to 178,091 visiting Hawaii in 2014.  Following strong demand from both U.S. and Korean travelers, Hawaiian up-gauged its service to Seoul in the spring of 2014 from a Boeing 767-300ER to the larger A330 aircraft, seating 294 passengers in a three-class cabin, with 18 in First Class, 40 in Extra Comfort and 236 in the Main Cabin. Operating the larger A330 aircraft added more than 18,300 seats annually to both travel markets.  Hawaiian now offers non-stop flights five days a week.

Hawaiian Airlines’ A330 offers popular amenities including personal high-resolution LCD touch-screen monitors in each seatback, increased legroom, and a roomy interior. The A330’s state-of-the-art entertainment system lets customers choose from a wide range of movies, with at least three new Korean-produced selections; TV programs; music; and video games; while also offering a USB port for the use of their own personal media players.

Starting next summer, Hawaiian will further enhance the travel experience aboard the A330 by introducing 180-degree lie-flat seats and adding 28 more Extra Comfort seats for a total of 68. Extra Comfort features five more inches of legroom; priority boarding at the gate; complimentary on-demand in-seat entertainment; and a personal power outlet. The first newly outfitted aircraft will enter Hawaiian’s long-haul network in the second quarter of 2016.

Hawaiian’ signature inflight hospitality celebrates the culture, people and Aloha Spirit of the Hawaiian Islands. As part of its Korea service, Hawaiian offers guests Nongshim noodles as a mid-flight snack and Gochujang (a popular hot pepper paste) as a condiment during the complimentary meal service in all cabins.

To commemorate its 5th anniversary in Seoul, Hawaiian Airlines is offering South Korean residents a chance to win two (2) roundtrip tickets to Honolulu by sharing their own #MyAloha story on the company’s official Facebook page. Please visit https://www.facebook.com/HawaiianAirlinesKorea/ for more information.

Tickets for the Incheon flights may be purchased online via Hawaiian's Korean-language website at www.HawaiianAirlines.co.kr, its English-language website at www.HawaiianAirlines.com, or by calling toll-free in the U.S. through its reservations center at 1-800-367-5320 or through its sales office in South Korea at 82-2-775-5552.

About Hawaiian Airlines
Hawaiian® has led all U.S. carriers in on-time performance for each of the past 11 years (2004-2014) as reported by the U.S. Department of Transportation. Consumer surveys by Condé Nast Traveler, Travel + Leisure and Zagat have all ranked Hawaiian the highest of all domestic airlines serving Hawai‘i.