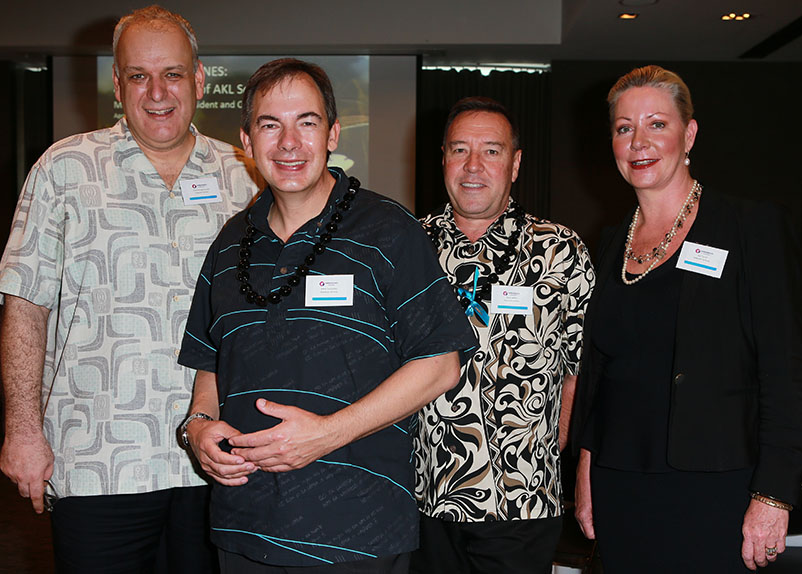 AUCKLAND, New Zealand – Hawaiian Airlines, the only U.S. carrier to serve New Zealand with nonstop flights to Hawai‘i, is celebrating its fourth anniversary in the market. Since 2013, Hawaiian has shared its award-winning island hospitality with more than 120,000 guests aboard over 500 flights from Auckland to Honolulu.

Mark Dunkerley, president and CEO of Hawaii’s largest and longest-serving carrier, highlighted the company’s successes, market investments and plans for growth at a news conference held on April 3 in Auckland. Prior to Hawaiian’s launch of three-times weekly service, fewer than 26,000 New Zealand travelers visited Hawai‘i in 2012, according to Hawai‘i Tourism Authority figures. Following Hawaiian’s entry, visitor arrivals from Auckland nearly doubled to more than 50,000 in 2013 and topped 60,000 for the third straight year in 2016.

“We have enjoyed welcoming a growing number of Kiwis on board with our warm hospitality in the superior comfort of our aircraft,” said Dunkerley, noting the carrier selected Auckland to be among the first routes with dedicated service by Airbus A330 aircraft featuring new lie-flat seating. “We thoughtfully designed our Premium Cabin with the leisure traveler in mind, and we are pleased to offer New Zealanders a relaxing and authentically Hawaiian in-flight experience as they set off to our shores.”

Four years ago, Aotearoa, with its shared heritage and deep cultural connections to the Hawaiian Islands, emerged as a natural and important part of Hawaiian’s international expansion. Hawaiian became the only U.S. carrier to fly into Auckland at the time it inaugurated service on March 13, 2013.

Hawaiian’s exclusive central Pacific hub on O‘ahu, along with its broad network of transpacific and neighbor island flights, offers New Zealanders convenient connections to the U.S. mainland and unmatched access to the Hawaiian Islands. The airline also provides travelers the option of taking a dual-destination vacation with a free stopover in Hawai‘i before connecting to North America or on the return to New Zealand.

Last year alone, more than 18,000 of Hawaiian Airlines’ guests arriving in Honolulu from Auckland headed to one of the carrier’s 11 gateway U.S. cities or to an island other than O‘ahu. Visits to Kauai, Maui and the Island of Hawai‘i all more than doubled between 2012 and 2013 and have held steady in recent years as New Zealanders discover the ease of neighbor island travel and the unique experiences found on each Hawaiian island.

Hawaiian’s flights between Auckland and Honolulu have spurred $247.6 million in total visitor expenditures and generated $27.6 million in tax revenues, according to the Hawai‘i Tourism Authority.

“Congratulations and mahalo to CEO Mark Dunkerley and his team at Hawaiian Airlines for four straight years of award-winning service between Auckland and Honolulu, which have benefited Hawaii’s economy,” said George D. Szigeti, president and CEO of the Hawaii Tourism Authority. “Hawaiian has performed tremendously in attracting and serving visitors from this key market, making it easier for people from New Zealand to experience all that our destination has to offer. This anniversary in air service reaffirms that travel demand from New Zealand remains strong.”

In December, Hawaiian introduced to its Auckland route a Premium Cabin featuring 18 lie-flat seats in its A330 aircraft. Guests enjoy luxury amenities, world-class island cuisine prepared by Hawai‘i’s top chefs and access to 100 hours of movies and TV on a 13-inch widescreen tablet. The airline also increased Extra Comfort seats to 68 from 40 to meet growing demand for its premium economy product that offers five more inches of legroom, priority boarding at the gate, complimentary on-demand in-seat entertainment, and a personal power outlet. Main Cabin seats, the roomiest in the Auckland-Honolulu market at 18 inches, are equipped with high-resolution LCD touch-screen monitors and a personal USB port.

Hawaiian offers non-stop service to Hawai‘i from more U.S. gateway cities (11) than any other airline, along with service from Japan, South Korea, China, Australia, New Zealand, American Samoa and Tahiti. Hawaiian also provides approximately 160 jet flights daily between the Hawaiian Islands, with a total of more than 200 daily flights system-wide.