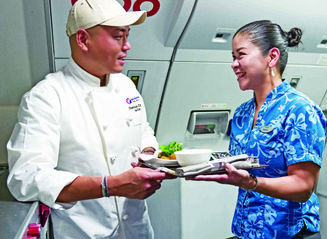 SEOUL - Hawaiian Airlines, Hawai’i’s largest and longest-serving carrier, celebrated its sixth anniversary in Korea and its new in-flight meal program by Chef Chang Wook with a “Fly with Chef” event held on Jan. 9.

The ‘Fly with Chef’ event started at the boarding gate of HA460 from Incheon to Honolulu as Chef Chang Wook Chung met with guests and posed for pictures. Guests were also treated to beverages, cookies and sandwiches while Hawaiian Airlines Country Director Soojin Yu gave remarks and thanked the crowd for taking part in the exciting event. After departure, Business Class guests were personally served dinner entrees by Chef Chung.

“In celebration of Hawaiian Airlines’ 6th anniversary in Korea, we held this event to enhance our guest’s flight experience and share with them our authentic Aloha Spirit.” said Soojin Yu, Hawaiian Airlines’ Country Director of South Korea. “With upgraded aircrafts arriving in the near future and increased inflight offerings, we will continue to provide the award-winning service our Korean guests have come to love.” 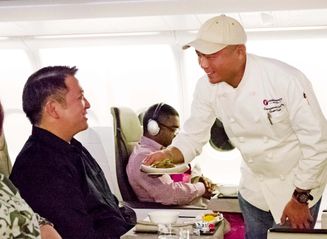 Hawaiian Airlines’ new inflight meals co-developed with Chef Chung went into service on Dec. 1, for guests flying from Incheon to Honolulu in both Business Class and the Main Cabin as well as in Extra Comfort.

Hawaiian offers five nonstop flights weekly between Incheon and Honolulu and has carried approximately 650,000 passengers on its ICN-HNL route since launching service in 2011.