SEOUL – Hawaiian Airlines, Hawai’i’s largest and longest-serving carrier, has been named ‘Airline of the Year’ by Incheon International Airport.

On March 29, Incheon International Airport Corporation held its 2016 Incheon Airport Awards ceremony at Incheon International Airport, where Hawaiian won the title of ‘Airline of the Year.' To be eligible for the 'Airline of the Year' category, airlines must have an annual passenger count of at least 50,000 and have earned high marks in 12 categories, including captain’s punctuality, low cancellation rate, speedy check-in, high overall satisfaction and immobility of safety culture. 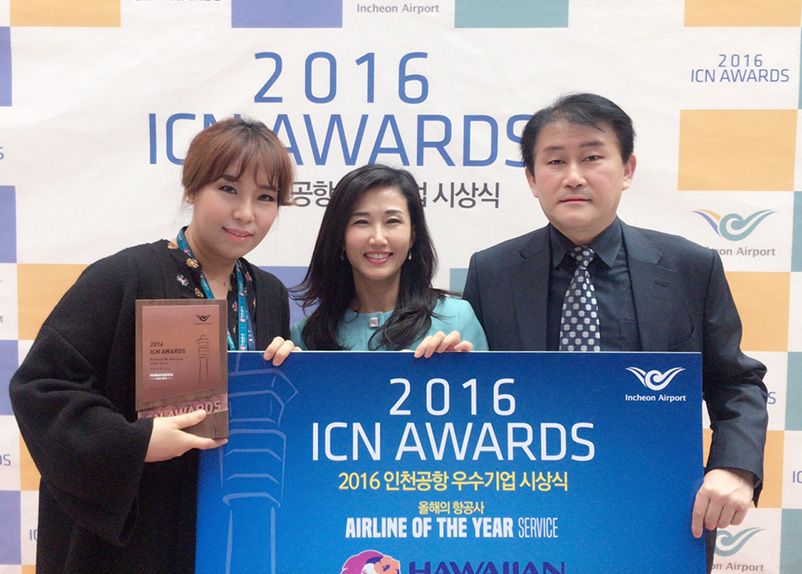 This marks the second consecutive year that Hawaiian received the 'Airline of the Year' award.

Soojin Yu, Hawaiian Airlines’ Country Director of South Korea commented, “I am honored to be a part of the Hawaiian Airlines ʻohana and work alongside employees who passionately strive to maintain an impressive record of on-time performance and operational safety."

"This year, we celebrated our 6th anniversary of Incheon-Honolulu service, and we will continue to provide our signature authentic hospitality for Korean guests,” she added.

Hawaiian Airlines has maintained a leading on-time performance among all U.S. carriers for the past 13 years (2004-2016) as reported by U.S. Department of Transportation. In January, Hawaiian Airlines was named the world’s most punctual airline by air travel intelligence company OAG.