HONOLULU – Hawaiian Airlines on Monday begins a roughly monthlong project at Honolulu’s Daniel K. Inouye International airport (HNL) to install new check-in kiosks in lobbies 2 and 3 in Terminal 1. The work, which will complete the airline’s multi-million-dollar statewide lobby renovations, also kicks off a series of planned improvements at the carrier’s main hub to enhance the day-of-travel experience for its guests.

The airline in recent months replaced check-in kiosks and refreshed its lobbies in Līhu‘e on Kaua‘i, Kahului on Maui, and Hilo and Kona on Hawai‘i Island. At HNL, where some 19,000 of Hawaiian’s 32,000 average daily guests begin or end their travel, the airline is embarking on a two-year modernization program that will include new guest service, baggage drop and premium check-in counters, the addition of a mauka security checkpoint, and access to the Mauka Concourse in 2021.

For the lobby refresh, Hawaiian partnered with Keone Nunes, a Maui master tattooist and cultural practitioner, to develop a unique island niho, or symbol, representing the theme of voyaging at each of its airport spaces. Learn more about the story behind the design collaboration here.

“We have received great feedback from our neighbor island guests as well as our employees regarding the new kiosks and refreshed lobbies, and we look forward to introducing a host of improvements at Honolulu to create an effortless travel experience for all of our guests,” said Jeff Helfrick, vice president of airport operations at Hawaiian Airlines.

Beginning at 4 p.m. on Veterans Day, Hawaiian will start installing 54 new Embross check-in kiosks that will replace the existing 48 kiosks in lobbies 2 and 3. The machines, which will be arranged diagonally instead of in a circle for easier access, feature the latest in kiosk technology, including larger and more responsive touch screens, and boarding pass/bag tag printers that reduce paper waste. Guests will be able to shave between 30 and 60 seconds off the average kiosk time of three and a half minutes.

The renovations are slated to occur during off-peak hours and overnight, with a break during the Thanksgiving week. 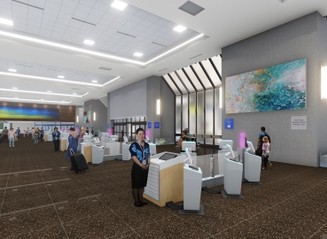 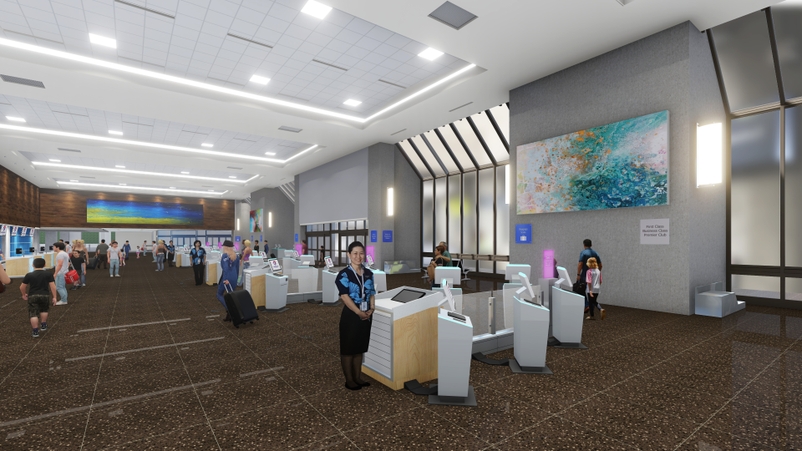