Hawaiian Airlines today announced it will extend its non-stop service between Los Angeles and Līhuʻe, Kauaʻi, expanding on the popular seasonal routes the airline has offered during the peak summer travel period. Additionally, even more flights between Los Angeles and Maui and Kauaʻi have been added from December 2015 to January 2016, offering an increased schedule with more flexibility for holiday travelers. 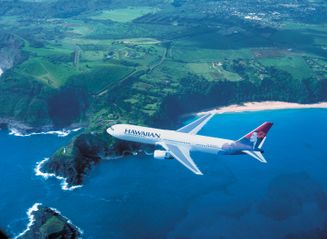 Hawaiian Airlines 767 airplane flying over the island of Kauai.

“Again this year we are pleased to offer additional service over the peak holiday season to address strong demand for travel to Hawaiʻi,” said Peter Ingram, executive vice president and chief commercial officer at Hawaiian Airlines. “We are also pleased to follow on the success of our summer flights between Los Angeles and Līhuʻe by extending these direct flights beyond the routine seasonal service.”

Hawaiian is currently operating on its summer schedule with four flights weekly between Los Angeles (LAX) and Līhuʻe, Kauaʻi (LIH). During the holiday season, flights will increase to five per week Dec. 18 through Jan. 4. Once the seasonal service ends in early January, Hawaiian will continue operating three weekly flights starting Jan. 8, marking the first time direct service between LAX and LIH has been offered outside of Hawaiian’s seasonal schedule.

Guests flying with Hawaiian Airlines experience the carrier’s signature onboard hospitality program, Mea Ho‘okipa (translation: I am host) from the moment they step on board. Travelers will enjoy island-style complimentary meals and made-in-Hawai‘i snacks to go along with Hawaiian Airlines’ engaging presentation of the islands’ culture, people and Aloha Spirit throughout the flight.

For guests traveling on Hawaiian’s wide-body Airbus A330-200, Hawaiian introduced Extra Comfort, a new premium economy offering that gives travelers more legroom and a bundle of other amenities.

Tickets for the new seasonal service are now available for purchase online at HawaiianAirlines.com or by calling Hawaiian Airlines’ reservations department toll-free at (800) 367-5320.