Expanded Partnership Connects Even More Destinations on a Single Ticket 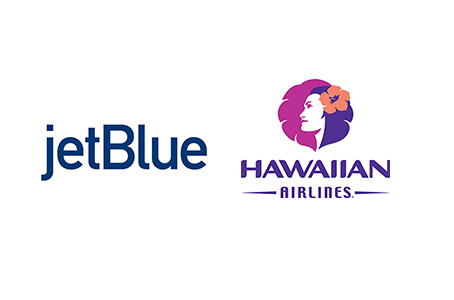 NEW YORK - JetBlue (NASDAQ:JBLU) today announced it has expanded its existing partnership with Hawaiian Airlines through a bilateral codeshare agreement. JetBlue is placing its ‘B6’ code on nonstop flights operated by Hawaiian Airlines between New York (JFK) and Honolulu (HNL). The ‘B6’ code is also available on select connecting flights from JetBlue’s east coast network to Honolulu via Los Angeles (LAX), San Francisco (SFO) and Las Vegas (LAS) and onward to Hawaiian’s neighbor island network to destinations including Maul (OGG), Kona (KOA) and Lihue (LIH). Additionally, Hawaiian’s ‘HA’ code, which has been on select JetBlue flights since 2012, is expanding to additional destinations in JetBlue’s growing network.

Customers purchasing a codeshare itinerary will benefit from having a single ticket that includes both Hawaiian and JetBlue-operated flights as well as conveniences on their day of travel like one-stop check-in and baggage transfer.

“JetBlue and Hawaiian have been consistently strengthening our relationship since we first partnered nearly four years ago so that we can offer the best travel benefits to our customers,” said Scott Laurence, senior vice president airline planning, JetBlue. “This latest step makes it easier than ever to book seamless travel, connect across our diverse networks of destinations and earn loyalty points anywhere our airlines fly.”

Hawaiian offers flights between Hawaii and 11 U.S. mainland airports, including JetBlue’s home at the award-winning T5 at John F. Kennedy International Airport. Hawaiian Airlines operates the only year-round, non-stop flight between Hawaii and JFK, offering convenient connections within the same terminal to JetBlue flights across the U.S., Caribbean and Latin America.

“We are pleased to expand our partnership with JetBlue to create more choices for travelers coming to the Hawaiian Islands or those seeking easy connections to destinations beyond our key gateways on the Mainland,” said Peter Ingram, executive vice president and chief commercial officer for Hawaiian Airlines.

Hawaiian and JetBlue also offer members of each carrier's loyalty program the opportunity to earn and redeem points or miles for travel on either carrier. JetBlue's TrueBlue members can accrue points on Hawaiian-operated flights, while HawaiianMiles members can earn miles on JetBlue-operated flights. Similarly, frequent fliers can redeem their points or miles for travel on either carrier's network, creating a long list of destinations for each program's loyal members.

JetBlue is known for its award-winning service featuring the most legroom in coach (a); free Fly-Fi, the fastest broadband internet in the sky; complimentary and unlimited name-brand snacks and soft drinks; free, live DIRECTV® programming and 100+ channels of SiriusXM® radio in every seatback.

Hawaiian's Mea Ho'okipa inflight service philosophy has long been embraced by travelers for its celebration of the culture, people and Aloha Spirit of Hawai'i. Hawaiian has cemented this signature service as the gold standard in leisure air travel and the only authentic Hawai'i experience.

Now in its 86th year of continuous service, Hawaiian is Hawai‘i’s biggest and longest-serving airline, as well as the largest provider of passenger air service from its primary visitor markets on the U.S. Mainland. Hawaiian offers non-stop service to Hawai‘i from more U.S. gateway cities (11) than any other airline, along with service from Japan, South Korea,China, Australia, New Zealand, American Samoa and Tahiti. Hawaiian also provides approximately 160 jet flights daily between the Hawaiian Islands, with a total of more than 200 daily flights system-wide.